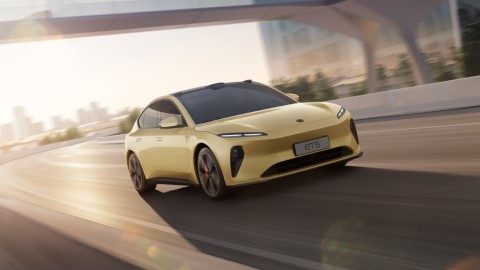 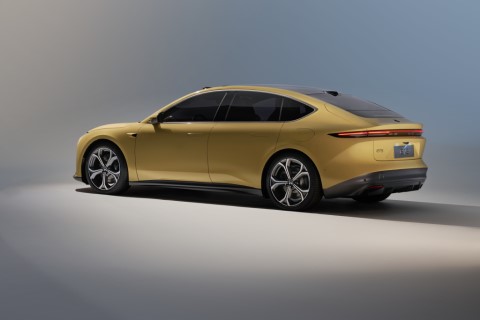 NIO has used its annual NIO day to launch its latest model – a mid-sized saloon called the ET5. With high-power and ultra-long range battery options, as well as almost identical dimensions to Tesla’s M3, NIO is gunning for more established EV makers with the ET5. What’s more, it’s heading to Europe as part of the brand’s market expansion.

Comparing the latest electric saloon to the relevant Tesla is a well-worn narrative, but with NIO’s latest offering – the ET5 – there really are many comparisons to be made. Revealed at the brand’s annual celebration in Suzhou, China, it will sit below the flagship ET7, itself a rival to the Model S, and brings with it an array of proprietary tech.

NIO’s exterior concept for the ET5 is ‘design for autonomous driving’. Broadly speaking it’s a scaled down ET7, which isn’t a bad thing. At 4.7 metres long it’s the same length as a Tesla Model 3, whilst the short bonnet and rear hatch also hark at the US rival. Sportiness isn’t at the forefront of the design, but muscular haunches and a wide track, alongside a small, ducktail spoiler hint at the car’s capabilities.

Other nice touches include flush door handles which operate soft close doors, and frameless windows which not only look good but enhance aerodynamics. NIO has designed the ET5 to be stiff and with a low centre of gravity, which sits at just 482.6mm above the ground. The wide track also helps with handling stability and roll-over resistance.

NIO is offering the ET5 with just one power level: a dual motor, all-wheel drive system with 483bhp (201bhp front and 282bhp rear) and 516lb-ft of torque. This enables the car to hit 62mph in 4.3 seconds and, thanks to four-pot brakes alongside regenerative braking, go back to zero again in 33.9 metres.

Three batteries are going to be made available, all of which offer Tesla-rivalling or beating range, aided by a focus on powertrain efficiency and a 0.24 drag coefficient. The 75kWh standard battery achieves 340 miles on the Chinese test, the 100kWh 435 miles and the ultra-long range, 150kWh battery enables the ET5 to travel as far as 620 miles to a charge – which is large diesel saloon territory.

In China, buyers can use the Battery as a Service (BaaS) system whereby spent batteries are autonomously swapped for charged ones at swapping stations.

As with most other EV makers at the moment, NIO wants the ET5 to feel like a second living room and has taken inspiration from furniture, fashion and even footwear. A large glasshouse and panoramic roof make for a bright area, whilst sustainable materials add to the car’s green credentials. When it gets dark, a 256 colour ambient lighting feature can be adjusted to suit occupants’ mood, whilst a Dolby Atmos 7.1.4 surround sound system provides an audio backdrop.

Up front, the PanoCinema cockpit mixes augmented reality and virtual reality tech to display driving and navigation information. Effective screen size is apparently 201 inches. When this isn’t in use, a 10.2 inch HDR digital display provides the vitals for drivers.

Another way in which NIO is seeking to compete with Tesla is in the autonomous driving stakes. The ET5 can be had with autonomous features as a service which offers hands-off driving on highways, in urban areas, when parking and during battery swapping. Further features are in development and will be rolled out in due course.

The NIO ET5 goes on sale in China in September 2022 with prices starting at RMB 328,000 £38,170 at time of writing) before subsidies, and RMB 258,000 (£30,026 at time of writing) with BaaS (Battery-as-a-Service). For the latter, additional monthly payments are required. NIO is beginning its European push in Norway and will enter Germany, the Netherlands, Sweden and Denmark in 2022 with the ET5 being available in these markets. By 2025, NIO will be in 25 countries and we are hopeful the UK will be on that list.