NIO has long been a hot tip for those looking to invest in EVs. Founded in 2014 by Chinese entrepreneur, William Li, its rapid ascent to become one of China’s top EV brands has seen money pour in from around the world. With its flagship ET7 saloon, NIO is now showing off just how far it has come in six years – with technology that is claimed to rival, or even beat, Tesla.

The reveal of the NIO ET7 took place at the NIO Day in Chengdu – an event designed to drum up investment by showing off the latest and best that the company has to offer. With the ET7, NIO is taking a big leap forward, rather than a few steps, thanks to the debut of its latest full stack autonomous driving capability and the promise of a solid-state battery option as early as 2022.

It’s worth noting from the off that the ET7 isn’t bound for Europe or even the US just yet, but the car’s technology is noteworthy.

Size-wise, the ET7 is slightly longer than a Tesla Model S or Lucid Air but is otherwise comparable. We suspect the extra length has been added to the wheelbase given the Chinese market’s love of spacious saloons. Styled in-house by a Chinese team, it is a good-looking thing, and pulls off the trick of integrating the various sensors into the exterior bodywork so they don’t stand out, aiding in a slippery 0.23 drag coefficient. Flush door handles and pillarless, soft-close doors add to the exterior luxury.

Inside, NIO has created a so-called ‘second living room’ concept, which is supposed to be “a refined and cosy mobile living space”. As standard, the NIO ET7 gets heated and ventilated massaging seats, as well as a versatile and natural material called karuun® for parts of the door trim and consoles – a first on a production car. Karuun® is processed from rattan, a climbing palm which grows quicker than trees and whose cultivation provides significant advantages over other types of wood and non-timber products. Furthermore, rattan for karuun® relies on biodiversity, can only be harvested by hand and cannot flourish in a monoculture, so supporting its cultivation actively helps preserve our planet’s rainforests and gives the local community a sustainable income.

Drivers are presented with a second-generation NIO “smart cockpit” powered by the latest Snapdragon mobile processing technology. This offers a high level of connectivity, controlled through a 12.8 inch central touchscreen and supplemented by a 10.2 inch digital instrument cluster. As standard, the NIO ET7 also gets a 1000W, 23 speaker sound system.

The ET7 will debut the latest version of NIO Autonomous Driving – or NAD – which is based on technology it has developed in-house. In a similar vein to Tesla’s Autopilot, it will be able to control the ET7 from a journey’s start to end, including all types of road, parking and even battery swapping (see below). It is controlled by 33 sensors, 11 high resolution cameras, an ultra long-range LiDAR, wave radars, 12 ultrasonic sensors, two high-precision positioning units, V2X tech and ADMS.

It generates and processes 8GB of data per second and has been extensively tested by NIO’s CEO in real-world conditions, among others.

Two motors power all four wheels on the ET7, with the front motor producing 241bhp and the rear 402bhp for a combined 643bhp. This is backed up with 827lb-ft of torque, taking the ET7 to 62mph in 3.9 seconds. Despite the prodigious power, NIO is keen to point out its focus on efficiency, with its second-generation drive platform using silicon carbide to minimise energy waste.

At launch, the NIO ET7 will be available with either a 70kWh battery pack, offering over 310 miles of range, or a 100kWh pack upping the NEDC range to over 435 miles. It’s worth noting that on the WLTP test these figures would drop somewhat. Buyers in China can also opt for the ‘Battery-as-a-Service’ option, a subscription service whereby they can swap a spent battery for a fresh one. This process takes around 90 seconds and NIO now has a big network of swapping locations around the country.

After launch, NIO will offer the ET7 with a brand new 150kWh battery pack, enabling the car to travel over 620 miles on a charge. This pack uses solid-state battery technology, giving an energy density of 360Wh/kg and making NIO one of the first EV makers in the world to offer the technology on a production car. For reference, the best lithium-ion batteries will be capable of somewhere in the region of 240Wh/kg.

NIO is planning for this new battery pack to be available from late 2022, so there is some time to wait. The good news for those who purchase a NIO ET7 or already own one of its existing models is that the new battery pack will be compatible with their cars.

As we’ve mentioned, the ET7 isn’t bound to leave China just yet, but NIO is bringing its ES6 to Europe this year. In launch spec, the ET7 will cost just under £60,000 without battery-as-a-service, or from £45,200 with it (applying current conversion rates from Chinese yuan to English pound). 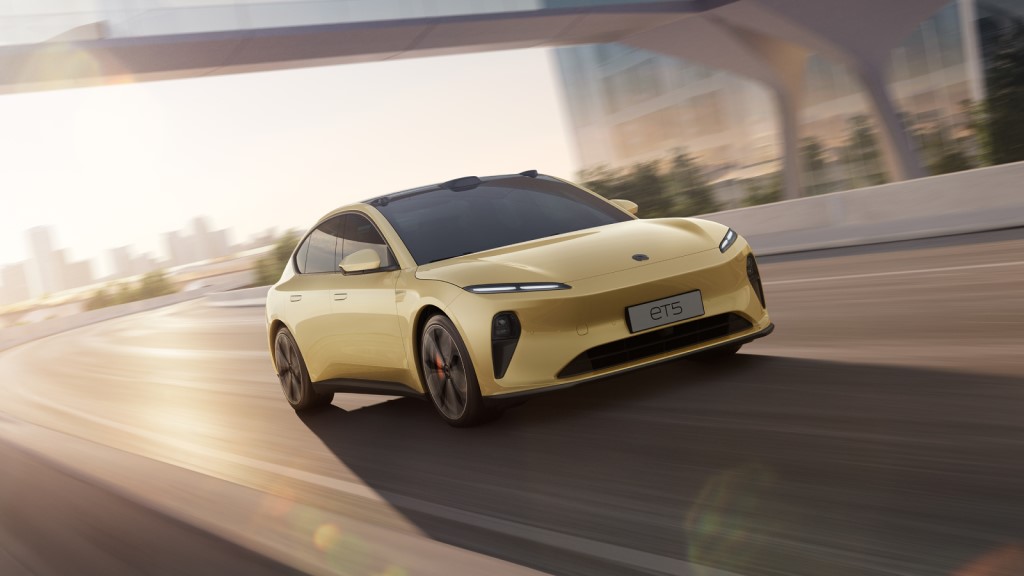