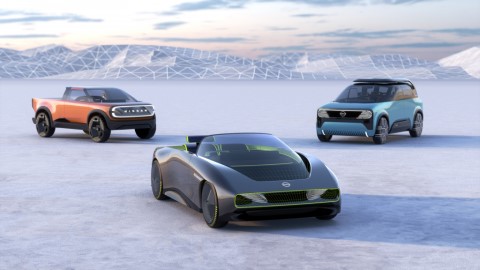 Nissan has unveiled its Ambition 2030 plan which provides a long-term vision for its move towards EVs and carbon neutrality. The company will introduce 15 new EVs by 2030 and is aiming for 75 per cent of sales in Europe to be EVs by 2026, and half of global sales to be EVs by 2030.

Ambition 2030 is designed to “respond to critical environmental, societal and customer needs”, with the ultimate goal being Nissan becoming a sustainable company. Electrification is at the core of the project, with the company destined to invest over £13bn in the next five years not only on vehicles, but charging, batteries and the rest of the electrified ecosystem.

Across both Nissan and Infiniti brands, the company has 23 new electrified models planned for launch by 2030, of which 15 are battery electric. By this time, more than 50 per cent of the Nissan/Infiniti model mix will be electrified.

In the next five years alone, 20 new EV and e-POWER (hybrid and petrol-electric) models will launched. It hopes that this will see electrified cars achieving more than 75 per cent of sales in Europe, more than 55 per cent in Japan and more than 40 per cent in China. In the USA, Nissan is aiming for 40 per cent of its sales to be battery electric by 2030.

Nissan has given us a preview of four cars – one ‘near-future’ EV, which is believed to preview elements of the forthcoming third-generation version of the LEAF, and three concepts – which demonstrate the brand’s direction. The Nissan Chill-Out is a crossover EV which uses the brand’s CMF-EV platform and e-4ORCE all-wheel drive system and could be a natural replacement of the Qashqai when it is launched in due course.

The three concepts take the form of the Max-Out – a small, lightweight, two-seat convertible which is designed for excellent driving dynamics and fun. The Surf-Out could be seen as a new-generation Nissan Patrol, offering off-road performance, a large load space and vehicle-to-load capability. Finally, the Hang-Out concept takes on the ‘living room’ concept, providing a quiet and comfortable space for both journeys and destinations. Advanced ProPILOT would make it semi-autonomous.

As well as the vehicles themselves, Nissan is developing its tech. Cobalt-free batteries will be introduced with the aim of bringing costs down by 65 per cent by 2028. Beyond that, it is planning to launch proprietary all-solid-state batteries (ASSB) the same year, with a pilot plant starting production as early as 2024.

It reckons its ASSBs can reduce charging time to a third of that of lithium-ion cells as well as reducing weight and potentially increasing range. It is aiming for these to cost $75 (£56) per kWh by 2028 and then work this down to $65 (£49) per kWh thereafter to achieve price parity with petrol cars. In terms of battery production, Nissan is shooting for 52GWh globally by 2026 and 130GWh by 2030.

Nissan’s ProPILOT driving aid systems will be democratised so that by 2030, almost every new model will gain next-generation LIDAR systems by 2030. Other projects will ensure it can work with local partners across the globe to increase sustainability and enhance mobility. By 2050, the brand aims to be carbon neutral, with manufacturing and extensive battery recycling feeding into this.

Aiding Nissan in achieving this carbon neutral goal is an additional 20MW of solar power which has been granted permission at its Sunderland plant. All part of the EV36Zero project, the additional renewable power will supply 20 per cent of the plant’s overall requirements – enough to build every Nissan LEAF sold in Europe. In total, the Sunderland plant now generates over 30MW from renewable power.