Back in June we had the Nissan LEAF 40kWh on test, and you can read our thoughts here – then just a few months later we were given the new LEAF e+ 3.ZERO with a higher output and longer range. Nissan is hoping that the evolution of the highly successful LEAF will broaden the appeal of EVs to more customers, so what exactly has changed? 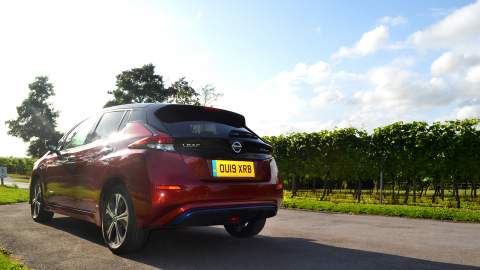 The new LEAF offers a number of different design options, with a total of ten body colours and seven two-tone body and roof colour combinations – our test car for example had Magnetic Red metallic paint (£575) with a pearl black roof for (£350). All new LEAF versions come as standard with the brand’s new NissanConnect infotainment system, with an larger 8” touchscreen, enabling additional connectivity services and an all-new and improved app.

The LEAF 3.ZERO – priced from £31,095 (including the £3500 UK Government Plug-in Car Grant) features the same 40kWh battery that we had before, but the e+ Limited Edition, priced from £36,795 features a higher output capable of delivering 217hp and 251lb-ft of torque, and up to 239 miles (on the WLTP cycle) from a single charge of the bigger 62kWh capacity battery. That equates to an additional 70hp, 37lb-ft of torque and an extra 70 miles thanks to what Nissan call an Intelligent Power-enhanced high-capacity battery and more powerful motor. 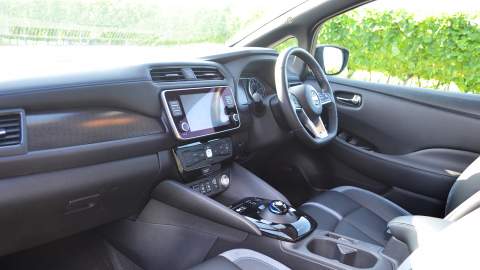 Well for those with concerns of range anxiety there is little to worry about with a 40 per cent increase over the 40 kWh battery equipped LEAF. On the road the more powerful motor certainly makes itself known, 0-62mph takes 6.9 seconds – an improvement of one second, while 50mph to 75mph is nearly 13 per cent quicker. It’s a little irrelevant where limits are restricted but it will now go on to reach 97mph, an improvement of approximately 10 per cent over the 40kWh version. What that does mean however, is that it gives you more confidence in motorway-merging and lane-change acceleration situations. We were able to cover well over 200 miles even with a heavy right foot and a lot of dual carriage way driving.

The downside to the increased power is torque steer, something which the 40kWh car suffered from. Nissan has apparently revised the suspension for the e+ (stiffening the springs), but the same issues are still present. The traction control goes crazy when you have steering lock applied, so exiting fast out of a corner for example. It’s far from agile and although the LEAF is often marketed as a ‘go anywhere’ EV, this is a car designed for the urban environment and in that sense it drives fairly well; its quiet, refined and comfortable. 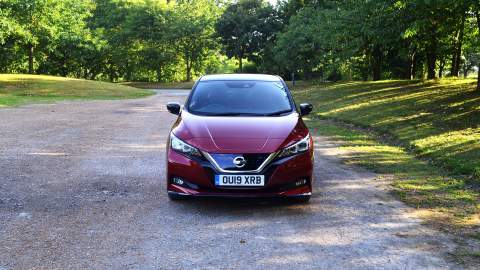 Has anything else changed?

Despite the fact that the new higher-power battery contains 288 cells compared to the 192 found in the 40kWh equivalent – providing a 25 per cent increase in energy density and 55 per cent increase in energy storage capacity – the Nissan LEAF e+ battery pack is almost the same size and configuration. So, other than a five millimetre increase in the car’s overall height (based on 16 inch wheels), the car’s exterior and interior dimensions are totally unchanged. Oh there’s new badging and blue trim accents, for your extra dosh.

The LEAF 3.ZERO models feature both the e-Pedal (allowing the driver to start, accelerate, decelerate and stop using only the accelerator pedal) and ProPILOT (an advanced driving assistance technology which works on single-lane highways), both of which we’ve discussed in our previous review.

Apart from that the interior of the e+ is the same as from the regular Leaf, so it has a generous amount of equipment and reasonable space – for the money however we would have liked less hard plastics and more premium materials. There is no reach adjustment for the steering wheel though, which is a bit tight when you consider this is a £30k plus car, and coupled with the high seating it’s not the most comfortable of driving positions for those over six foot. 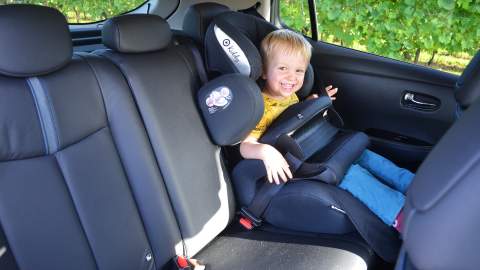 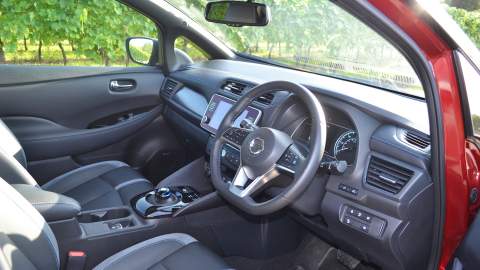 Is it worth the jump in price?

The new Nissan LEAF e+ will cost you an extra £8600 which is quite a lot despite the increase in range from 168 to 239 miles, added performance and improved NissanConnect EV navigation and entertainment system. Nissan say the extra range is enough to take the LEAF from second car to only car, but if you’re someone that doesn’t do many long trips, the £27,995 40 kWh variant is the one to go for.

That said, the LEAF has a good track record when it comes to providing reliable transport announcing in March of this year that it become the first EV history to surpass 400,000 sales, so if that’s important to you then you should stick to Nissan’s offerings. This car, like all EVs, also offers huge benefits to company car drivers, with the revised BIK charges seeing zero emission electric vehicle tax liability fall 16 per cent this year to 0 per cent for the tax year 2020-21. 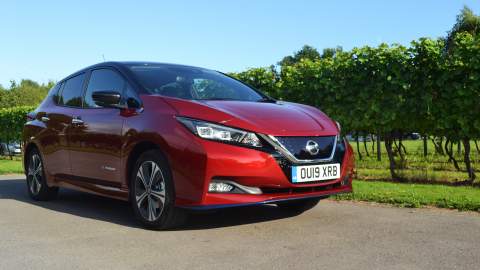