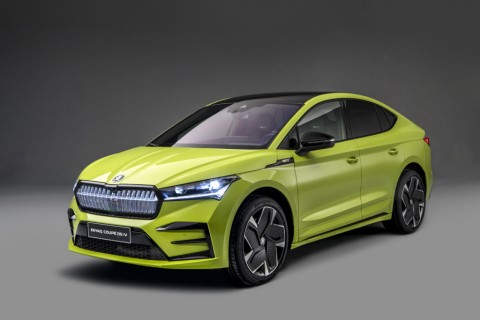 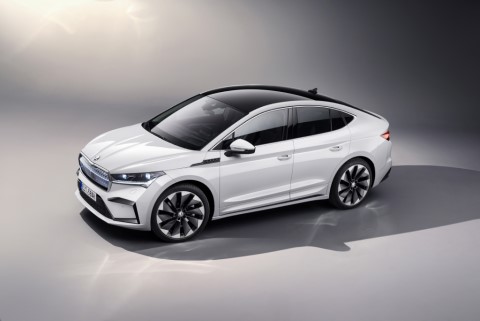 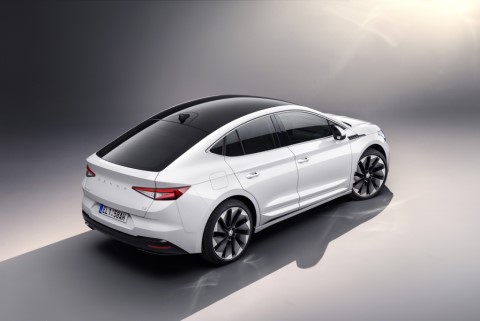 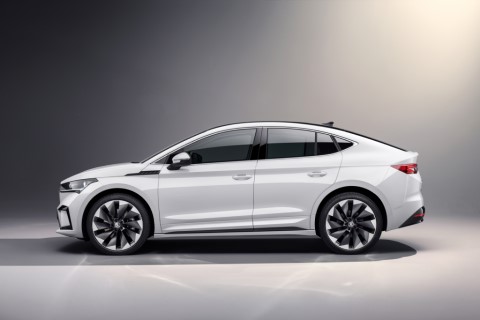 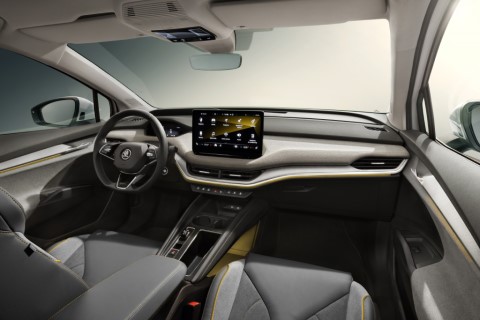 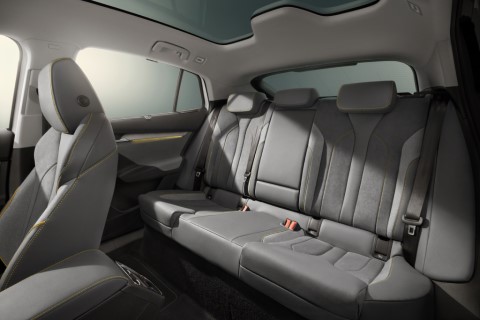 Škoda has added a coupe version of its Enyaq iV to the line-up. Like the VW ID.5 and Audi Q4 e-tron Sportback before it, the Enyaq iV Coupe adds dynamism and a sporty look to Škoda’s electric offering. It’s not just visuals: a vRS version adds performance into the mix as well.

Škoda is offering rear and all-wheel drive versions of the Enyaq iV Coupe. All feature the 82kWh (77kWh useable) battery which, in the 201bhp, 229lb-ft single motor version, offers up to 339 miles of range. The Škoda Enyaq iV Coupe 80x is fitted with a motor on the front axle bringing power to 261bhp and 313lb-ft of torque. Both of these versions have a top speed of 100mph.

All versions can be charged from 10 to 80 per cent in just 29 minutes thanks to 135kW DC input whilst an 11kW on-board charger enables home charging overnight.

The most obvious difference between the regular SUV and the Škoda Enyaq iV Coupe is the exterior styling. From the B pillar back the roofline gently slopes towards the rear before merging with the tailgate that features a sharp trailing edge. As standard, the Coupe comes with a dark tinted panoramic glass roof – the largest on any Škoda. A benefit of the glass roof is that it is thinner than a metal roof, increasing available headroom for passengers.

Up front is a discrete sporty apron as well as colour-coded side skirts which run between wheels varying from 19 to 21 inches in diameter. The Enyaq’s so-called Crystal Face, where the vertical ribs of the grille are illuminated, is optional on most Coupes but comes as standard on the Enyaq iV vRS. Speaking of the vRS, it gains black 20 inch ‘Taurus’ wheels, some aero trim and vRS logos around the car. Across the range the Enyaq iV Coupe has been lowered by 15mm at the front and 10mm at the rear compared to the SUV.

Should anyone want to do some towing with their Enyaq iV, a retractable tow bar can be specified. The standard car has a slippery drag coefficient of 0.234 which helps maximise range.

Škoda states that the Enyaq iV has headroom ‘on par with that of a Škoda Octavia estate’. We assume that this translates to 12mm less rear headroom vs the SUV version – in-line with the reduction between the VW ID.4 and ID.5. Otherwise, the room inside is on a par with the SUV, so owners won’t find it lacking. Boot space is a capacious 570 litres and an optional electric tailgate is available.

As with the SUV, the Škoda Enyaq iV Coupe has interior seat covers made of sustainable materials including 40 per cent new wool and 60 per cent polyester made from recycled plastic bottles. For those who want leather, the ecoSuite tanned leather is coloured in an eco-friendly process that negates the use of chemicals. For vRS models, a sportier interior with black perforated leather and grey piping alongside various vRS badges comes as standard.

There’s a high level of tech across the range with a 13 inch central touchscreen and 5.3 inch digital cockpit coming as standard. Navigation and DAB radio are standard, as is mobile connectivity via SmartLink, Android Auto and Apple CarPlay, with wireless charging to boot. Over-the-air updates will keep the car running on the latest software versions as they are released. A dedicated mobile app allows owners to check car status and adjust settings remotely.

As well as entertainment, there’s a smorgasbord of driver aids including a new, optional parking assist that includes automatic braking. Škoda Travel Assist 2.5 combines various functions such as adaptive cruise, lane assist and traffic jam assist to provide a level of hands-on autonomy to help make longer journeys more relaxing. Nine airbags as standard help protect occupants in the event of a crash.

Škoda hasn’t revealed the prices of the Enyaq iV Coupe just yet but we expect them to undercut those of the VW ID.5 by a slim margin, meaning the regular Coupe would start at just under £50,000. We will bring you more news as we get it.

Update 10.02.22: Škoda has confirmed that the Enyaq iV Coupe vRS will be available to order from February 17 and will cost from £51,885. It is the first of the forthcoming Coupe models to go on sale here in the UK and deliveries are expected to begin in July. Prices for the non-vRS models will be released in due course.