Škoda is joining Volkswagen in launching its first EV based on the much lauded MEB platform. Called the Enyaq iV, the small SUV is set to spearhead the Czech brand's e-mobility campaign, bringing it into line with not only VW, but other competitors like Hyundai and Kia.

Way back early last year we reported on the Vision iV – a four-door SUV based on the MEB platform that would have a range of up to 310 miles. Now, a year or so down the line, the brand has revealed the actual car that is set to fulfil what was previously a concept.

The Enyaq iV will join the Volkswagen ID.3 in using the MEB platform – a first for Škoda – and when it goes on sale, will be the car that really kick-starts the brand's EV aspirations. It's being touted as a perfect family car capable of relatively long journeys, with the biggest of three battery sizes offering 310 miles of range. Five powertrain options will be on offer, and Škoda is promising that the Enyaq iV will embody its 'Simply Clever' brand values by being practical, stylish and fun to drive.

In order to hit several different price points, Škoda is offering the Enyaq iV with three different battery sizes and five different powertrains. At the lower end of the spectrum the car will be rear-wheel drive only, with four-wheel drive available on more powerful models, with the most powerful even having 1200 kg towing capacity.

At the low, and therefore cheaper, end of the model range will be the Enyaq iV 50, which comes with a lithium-ion battery with 52kWh net capacity and a rear-mounted, 146bhp motor which provides up to 211 miles of range. The next model up, the Škoda Enyaq iV 60, has a 58kWh (net) battery and 177bhp sent to the rear wheels, providing 242 miles of range. The car with the greatest range is the Enyaq iV 80 which is again rear-wheel drive, has 201bhp and thanks to a 77kWh (net) battery, can drive for up to 310 miles.

Taking the performance up a level are two top-of-the-range versions which also utilise the 77kWh battery. The 80X and ubiquitous VRs versions of the car have a motor up-front as well as at the back, delivering 261bhp and 301bhp respectively via all four wheels. The VRs will do 0-62mph in just 6.2 seconds, has a top speed of 112mph and a range of up to 286 miles.

Charging wise, the Škoda Enyaq iV can be juiced from a household socket overnight or via an 11kW home wallbox. At 11kW the car takes between six and eight hours to charge, depending on which battery is installed. Maximum input using DC fast-charging is 125kW which will see the Enyaq iV charged from 10 per cent to 80 per cent in just 40 minutes.

As you can see from the pictures, Škoda is keeping a lid on exactly what the car will look like for the time being. However, it is talking about “emotive” and “trend-setting design and maximum functionality” - which again, tells us very little! We definitely look forward to seeing it without the camouflage.

That being said, we do know that the SUV is 4648mm long, 1877mm wide and 1618mm high with a wheelbase of 2765. This puts it just below a Škoda Kodiaq size-wise in all dimensions, so it's not small by any stretch of the imagination. The boot capacity is 585 litres, which is decent enough. Despite its size, Škoda has managed to eke out a slippery drag coefficient of just 0.27 Cd.

Škoda has released some new renders of the Enyaq iV which now offer a much clearer view of what the finished product will look like. Whilst we have to wait until September 1 for the reveal, the renders show a car that is angular and – in Škoda's head of exterior design, Karl Neuhold's own words – balanced and confident. Thanks to the flexibility that EV powertrains provide, the Enyaq iV has a shorter front end and elongated roofline which the brand has labelled a 'space shuttle' look.

Neuhold says that for him, the front end of the car is his design highlight. He said: “We consciously emphasise the distinctive ŠKODA grille on our electric vehicles, as this is an instantly recognisable feature of the brand. On the Enyaq iV, it is set further forward and is more upright, which enhances the powerful look. The full-LED matrix headlights and daytime running lights are particularly eye-catching, too.”

Check out the renders in the image slider at the top and see what you think.

Škoda is boasting about the interior as being one of the major highlights of the Enyaq iV and to be fair to the brand, they do shine in the space, quality and levels of kit department. The very size of the car and the benefits of an EV powertrain have apparently allowed Škoda to increase the feeling of spaciousness inside with a “generous amount of space which exudes a lounge-like character”.

For the driver, an all-new 13 inch, free-standing central display shows all the relevant information (and can presumably be configured to a driver's preferences). A head-up display with augmented reality – like has been demonstrated on the ID.3 recently – will enable more information to be shown without looking away from the road. Permanent internet connectivity keeps the car up-to-date through over-the-air updates and we would assume that the Enyaq iV will benefit from V2X technology to provide live traffic and navigation updates.

Sustainable materials are being introduced on the car to complement its green credentials. Olive leather – a highly sustainable form of the material – is being used on a production car for the first time, for example. Of course, Škoda is promising a variety of options for customers when the car goes on sale.

When can we expect it?

Happily, we won't have to wait too long until the Enyaq iV goes on sale as the brand has already done the hard work in prepping its production line in Mladá Boleslav, Czech Republic, to build the car. In fact, the plant will be the first outside of Germany entrusted with putting together MEB-based cars. Production is due to start later this year, with deliveries starting early next year, so we should be able to bring you more detailed news and some camo-free images of the car in the next couple of months. 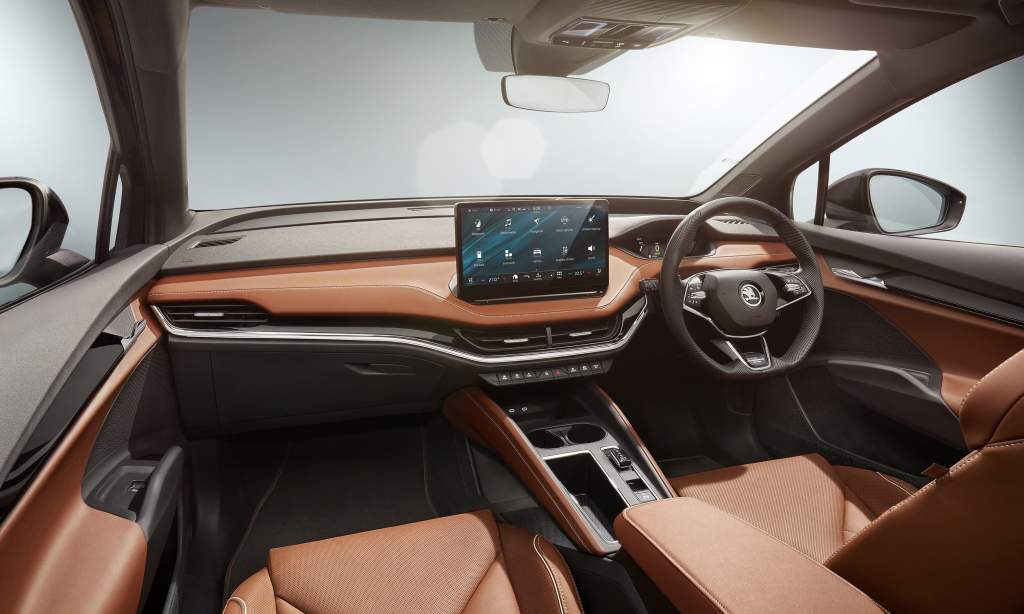