Rallying and EVs are proving to be good bedfellows. Already, Extreme E is making waves on the global motorsports circuit whilst WRC’s biggest names will be using Rally1 hybrids exclusively from next year onwards. Adding to this list of electrified success is the Škoda RE-X1 – a newly developed, BEV rally car with the performance potential to beat even WRC’s Rally1 hybrids.

It has been developed jointly between Škoda, Kreisel Electric and Baumschlager Rallye & Racing with the specific intent on competing in Rallye Weiz – Austria’s domestic rallying championship.

To look at the Škoda RE-X1 Kreisel, it looks exactly like its petrol-powered Fabia Rally2 evo counterpart, and it’s upon this car that the RE-X1 is based. However, the creators have done away with the 1.6-litre turbo and replaced it with two electric motors and a 52.6kWh battery. Combined, the two motors create 349bhp and 442.5lb-ft of torque, which is similar to the current Rally2 cars.

Rather than having a sequential gearbox and all of the transfer cases and driveshafts that a traditional four-wheel drive system necessitates, the RE-X1 simply has a motor on each axle. According to Kreisel, it was no small task getting the motors to work together like a traditional rally car. In addition, whilst plenty of oily bits were ditched, the combined weight of the battery and motors still added 100kg to the car’s overall weight.

The battery, created by Kreisel Electric, uses a bespoke thermal management system so it can push maximum power to the 860 volt motors consistently, and its thirsty work. Around 1.2kWh per kilometre is used on a rally stage – which is shocking compared to a road-going EV – so 40km/25 miles is about the maximum range at race pace.

That said, all Rallye Weiz stages come in under this distance with the total competitive driving distance being 160km/100 miles. Including transfers between stages, the RE-X1 completed over 300 miles of driving.

Obviously, charging while in the woods at the start or end of a special stage isn’t a case of plugging into a public charger and waiting for 35 minutes. Instead, the Kreisel Electric Chimero mobile charging station formed part of the support crew, capable of providing 200kW and charging the RE-X1 to 80 per cent in just 15 minutes. This rapid charging was required to avoid time penalties and meant that there wasn’t a significant disadvantage to the petrol competitors.

The result of all this development and of the team sticking its neck on the line was third place overall across the weekend’s stages with Austrian driver, Raimund Baumschlager behind the wheel and Jurgen Heigl reading the pace notes. According to Baumschlager: “Third place is a brilliant result for us, especially since this was the world premiere of an electrically powered competition car that completed the full length of the race. We now have a lot of data needed for development and we can’t wait for the next race.”

So talk about proof of concept. It’s surely only a matter of time before EVs are allowed to enter into the top-tier WRC competition… 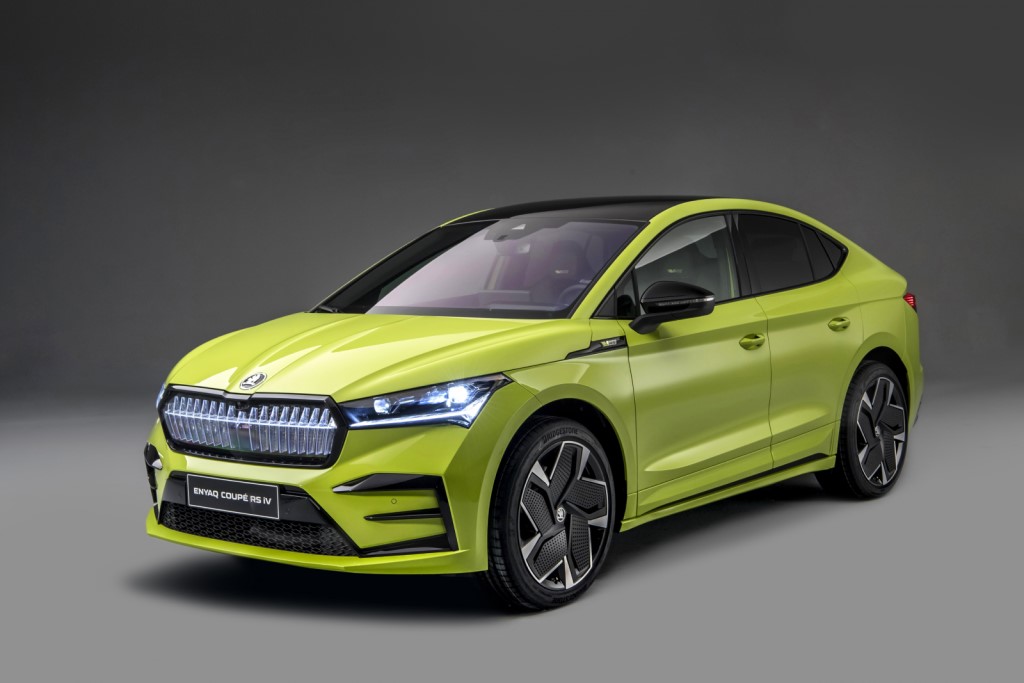 Škoda Enyaq iV Coupe and vRS added to the range