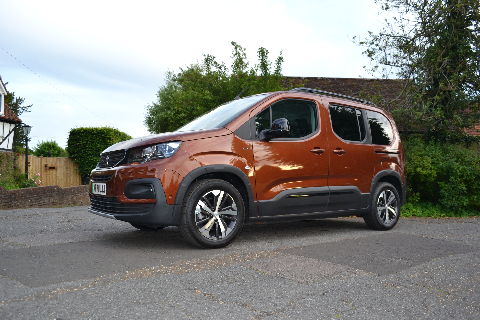 Peugeot e-Rifter: The most expensive of the three Stellantis electric MPVs

If the e-Rifter reminds you of something else that’s probably because it is one of three almost identical vehicles produced by Peugeot parent firm Stellantis and sold with various badges on it, namely the Vauxhall Combo-e Life and Citroën ë-Berlingo. All of these vehicles have stopped selling the internal combustion engine versions of the passenger vans, with each brand pointing out the huge increase in sales of EVs, plus their respective ambitions to go electric only as reasons. It’s a move that makes sense, except for the fact if any of these vehicles are your main car you’ll need to be prepared to plan ahead on longer journeys and stop more to juice up as the range is woeful. We get a five-seater GT variant on test for a week to see what it’s like to live with.

Like the Citroën ë-Berlingo, the e-Rifter is built on the multi-energy EMP2 platform and features the same 136bhp electric powertrain capable of up to 192lb-ft of torque. It has a top speed of 83mph and is slighter quicker to accelerate from zero to 62mph shaving off .3 seconds with a time of 11.2. It comes with three driving modes: Normal, which limits power to 107bhp for everyday driving, Eco, which restricts power to 80bhp and reduces heating and air conditioning to preserve energy, and Power, which releases everything it’s got. Drivers can also pick between two regenerative braking modes: Moderate, which is similar to the feeling in internal combustion vehicles when lifting off the throttle or Increased, accessed from the B button, which does what it says on the tin so to speak.

In terms of handling the suspension is very soft, yet it brings none of the associated comfort benefits, jiggling over ruts and bumps. Thanks to a specially adapted power steering system, it does at least have an agile turning circle of just 10.8m, handy in a vehicle of this size when you are trying to park, the steering is light too and relatively accurate to give you confidence when you put your foot down on the B-roads but there is a bit of body lean. We’re under no illusions though – this is a tall MPV (or a van with windows), it’s never going to handle like a sports car. 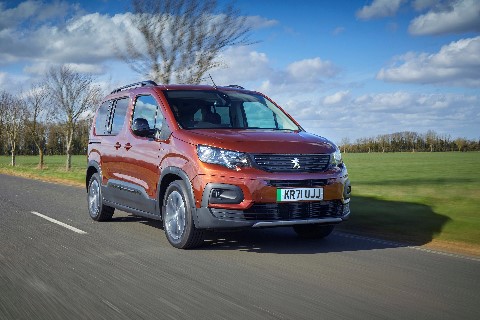 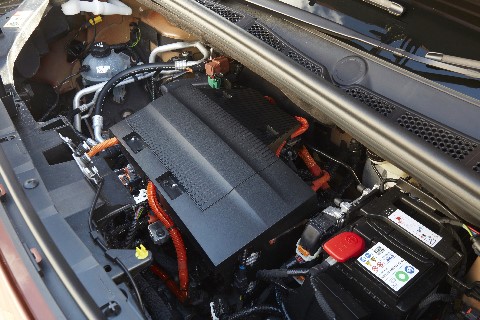 With just a 172 mile range, or around 150 in real world driving, you’re extremely limited in what you can do without having to pre-plan. On a return trip to Whitstable from our home just outside of Tunbridge Wells for example (via Sevenoaks on our return to collect my step son) – we got a taste of the infrastructure anxiety felt by so many. It is only a 100 miles but having driven 48 miles the day previously and not charged overnight (our other EV had just two miles with my husband just making it back from Cotswolds and thus took priority) we knew we’d need to stop. This meant a detour to M&S Maidstone – and if all three 50kW devices had been out of use our other options were bleak with just one other device delivering the same power at a nearby restaurant (and in use having already done a recce of it!) or a couple of 7kW chargers en route (which would have taken at least a few hours, given it’s 7.5 hours for a full charge).

Using the optional 11kW three-phase charger, would take that time down to five hours, but it’s far from ideal! Supporting 100kW rapid charging, 0 to 80 per cent charge can be completed in just 30 minutes, much more like it. But there are not enough of these chargers, certainly not where we were going anyway! Again just like the Citroën, you can use an app to schedule delayed charging to take advantage of off-peak electricity tariffs, meaning – even with the hike in energy prices – it’ll still be cheaper than filling up with petrol or diesel. Peugeot is also offering a free six month charging subscription to BP Pulse with every new electric or plug-in hybrid vehicle, giving buyers access to a network of charge points in the UK.

Similarly running costs will be lower with fewer moving parts, and customers can opt to purchase their vehicle with a single service plan to cover all essential maintenance, and there’s also no yearly VED road tax to pay, either, with the lowest Benefit-in-Kind rate for business users. Owners are also given a certificate of battery capacity after each service, with the battery under warranty for eight years/100,000 miles for 70 per cent of its capacity. 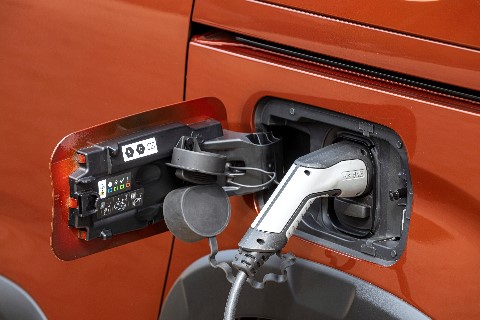 Peugeot have apparently given the e-Rifter lots of SUV styling cues in an effort to make it look more rugged, so there is black plastic cladding and roof bars, together with a monogram of its name on the back. The GT version has 17 inch aluminium wheels, which do a much better job of filling the arches than the standard 16s, and bespoke styling elements – it’s uninspiring but slightly less van-like than the Vauxhall and Citroën  versions. It is available in Standard or Long variants, measuring 4.40m and 4.75m respectively. All variants have an external height of 1.90m. 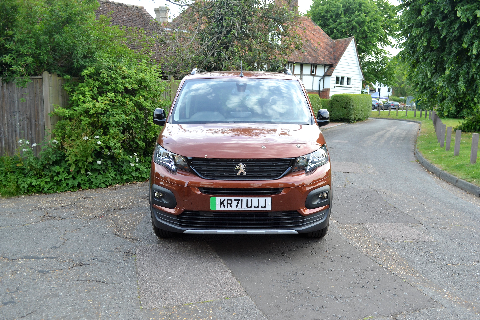 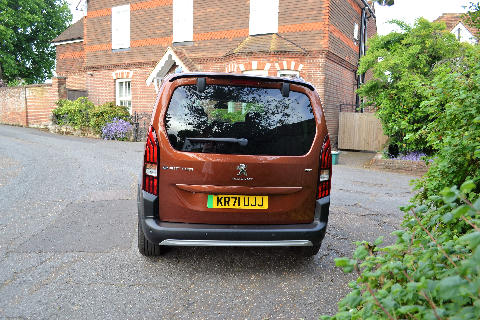 Available in two trim choices (Allure Premium and GT, as per our test car), both feature what the brand call its innovative digital i-Cockpit interior – basically a digital instrument panel and central display, which was first in the segment but to be honest feeling quite outdated now, as well as a small octagonal steering wheel. This helps to distinguish it from the ë-Berlingo and Combo-e Life and unlike its smaller cousins – the e-2008 and e-208 – the high driving position and tall dashboard design mean it’s a little easier for those over 6ft to get comfortable and have a clear view of the instrument cluster. Again, it feels less like a van compared to its sister models with proper door bins and a centre console rather than a flat floor.  They’ve also made an effort to help it look more upmarket with coloured trim and stitching for the black checked fabric seats but it’s still all very plasticky. 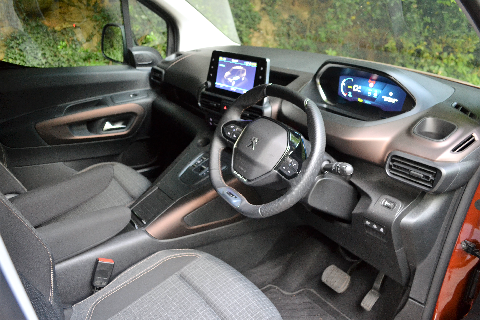 Each variant is available with a five or seven-seat configuration, and in both models the second row of seats can be slid up or down the cabin, folded, or fully removed from the vehicle, previously an optional extra. With the battery located underneath the floor, no compromise has been made in terms of boot or cabin space either, with 775 litres for the five-seater (1050 for the long-wheelbase) extending to a huge 3000 with the second row seats dropped (or 3500).

There are a number of large storage compartments dotted throughout the cabin for added practicality, all of which add up to 186 litres. Unique for the segment is the opening rear window, so you don’t need to be mindful of where you park to access stuff in the boot as that tailgate is huge when you open it up, not to mention heavy! The e-Rifter is also capable of towing up to 750kg and comes with trailer stability technology that reduces vehicle speed when it detects the trailer swerving.

The sat nav isn’t the easiest to use on the move nor is it very intuitive (or quick to respond with simple commands such as cancelling a route difficult to work out at a glance, not helped by small graphics that are hard to decipher. It does at least have Apple CarPlay and Android Auto as standard so you could always run your phone apps through the screen. It’s comfortable and roomy for five big adults, and it has Peugeot's Safety Pack fitted as standard that features Active Lane Keeping Assist, Active Safety Brake, Cruise Control with a Speed Limiter, Speed Limit Recognition and Recommendation, plus Driver Attention Alert, in addition to rear parking sensors and a 180° coloured rear camera. 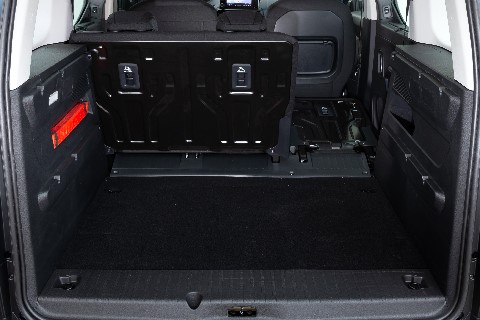 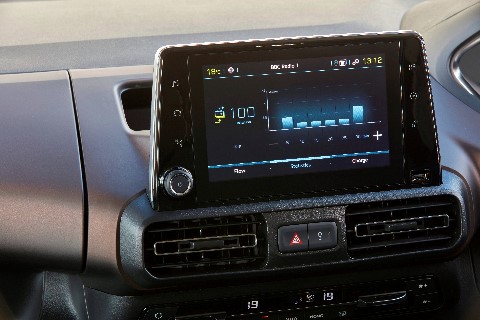 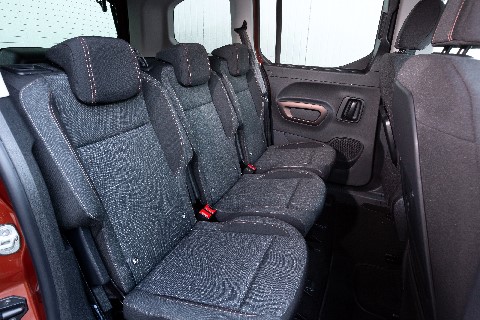 Unless you're sold on the lovely Peugeot lion badge, you may want to consider the Vauxhall and Citroën equivalents given it is the most expensive of the three at £32,875 for the base trim vs £29,610 and £31,995 respectively. Elsewhere? Well, you could wait for the Volkswagen ID Buzz, which promises more range and smarter retro-styling, but will also cost almost £62,000. There’s also the Mercedes-Benz EQV, but that’s even bigger and posher and costs closer to £79,000 or if you really want to splash the case there’s the Tesla Model X which at the time of writing you can only put down a deposit of £100 with pricing and options finalised as delivery approaches, but don’t expect any change from £100k. If you’re just looking for a large 5-seater, the Skoda Enyaq IV and Volkswagen ID 4 would fit the bill, offer more range but also cost more, which leaves the new MG5 EV, offering 250 miles on a charge, 100kW charging capability and even in top trim cost less than the e-Rifter. One of the main reasons you’d pick the e-Rifter or one of its sister models over one of the aforementioned EVs is its superior practicality – it may not be plush but it can stand up to the abuse that comes from having children.  Overall then, this is a very practical, versatile, spacious five or seven-seater, an option currently lacking in the EV space, and for the money it’s great for both large families and businesses – just plan in advance if you want to go anywhere over 150 miles! 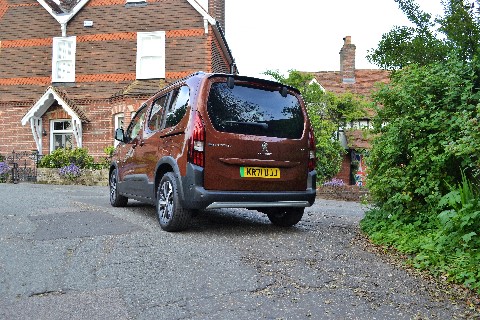