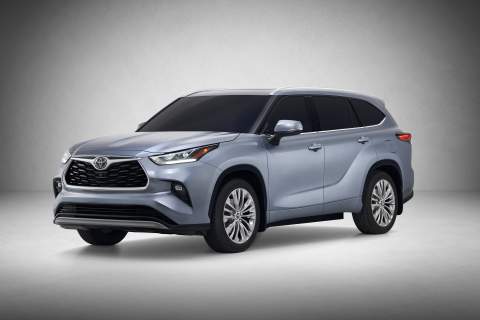 Toyota’s Highlander model was recently launched at the New York Auto Show, and its fuel economy figure of 34mpg combined grabbed the headlines – a 17 per cent improvement over the current generation hybrid.

Another of the 2020 Highlander Hybrid’s outstanding features is its 12.3 inch multimedia touchscreen display – the biggest in its class – which is available on the Platinum model. Speaking of specifications, this new SUV comes in four trim levels, though all have seating for seven or eight passengers and infotainment software that now includes Apple CarPlay and Android Auto compatibility as standard.

There’s another new nifty feature that works in tandem with the navigation system to anticipate traffic conditions and can allow the crossover to coast for longer distances when the 2.5-litre engine is not being used. The normal, sport, eco and EV drive modes remain. And the lithium-ion battery pack is located below its rear seat, so that boot space remains as roomy as ever.

The 2020 Highlander Hybrid will make its way to customers in, surprise, surprise, 2020 – February to be exact. But there’s no word from Toyota on price as yet.