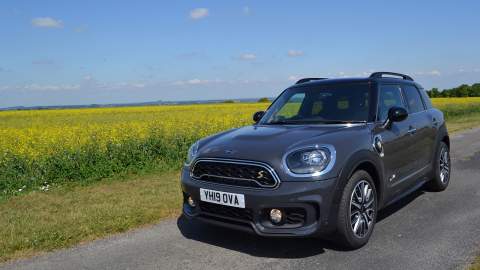 The new electric MINI is now available to order with deliveries beginning in March 2020, but if you can’t wait that long or indeed you’re not ready to go down the electrified route just yet there is another option.

The F60 MINI Countryman Cooper SE Sport is the brand’s plug-in hybrid, a medium-sized five-door hatchback. Its rivals include the Volkswagen Golf GTE, Audi A3 e-tron Sportback, Toyota Prius Plug-in (and self-charging C-HR), Hyundai Ioniq Plug-in, Kia Niro Plug-in and the larger Mitsubishi Outlander PHEV. This is set to change, though, with almost every manufacturer set to unleash its plug-in hybrid models in the near future, but for now the MINI is slightly different in that it has a raised crossover-style ride height and seating position, and it is four-wheel drive. 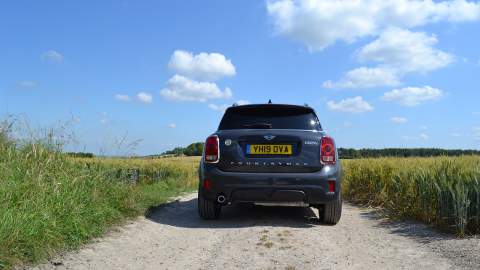 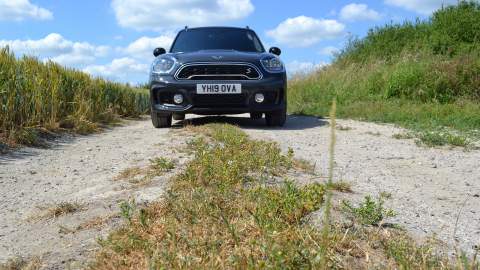 What are the pros and cons of the MINI PHEV?

Sadly the OLEV grant of £2500 which was available when this car was launched in June 2017 is no longer available and it’s not cheap anyway, with prices north of £33,400 (our test car topped out at almost £41k with what most be every option box ticked). That said standard kit is fairly good with a 6.5 inch colour screen, satellite navigation, Bluetooth, cruise control and autonomous emergency braking.

We like the fact that the Lithium-ion high-voltage battery can be charged at a wallbox in just two hours 15 minutes or an hour longer via a regular household socket. Also because it is housed just underneath the rear seat, the luggage compartment volume is only 10 per cent less than in the conventionally powered model variants (450 litres falls to 405), maintaining the space and practicality of the largest model in the MINI range.

That sort of space puts in on a par with most medium-sized five-doors. As a result of the rear seats having to be raised slightly to accommodate the battery the option to slide them back and fore is no more – a negative for those with long legs, but that said head room is at least respectable by class standards thanks to the Countryman’s high roofline.

Despite the motor and its battery adding 130kg to the car’s overall weight (now tipping the scales at 1660kg), it doesn’t seem to impact the car’s cornering ability, but you can feel it under hard braking.

It’s worth mentioning it has a smaller fuel tank (36 litres compared to 51) and while MINI claims the extra economy of the Countryman should boost driving range to help make up for it, it still means more trips to the petrol station on a long drive. 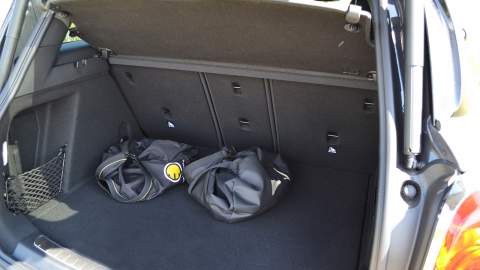 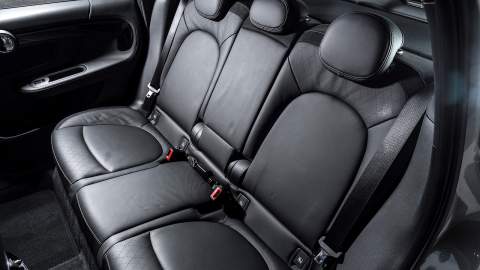 Under the bonnet is occupied is a 1.5-litre petrol engine which provides a peak output of 136hp and maximum torque of 162lb-ft, and comes on stream at 1250 rpm. It is combined with a modified six-speed Steptronic transmission which transfers its power to the front wheels. The whole setup lives underneath the BMW 225xe people carrier, too.

The second power unit is an electric motor and offers a high output of 88hp, generating a 122lb-ft that is available from standing, as well as constant power delivery even during high engine speed ranges. It directs its power to the rear axle via a two-stage single-speed transmission.

Combined to produce a total system output of 224hp and 284lb-ft enables it to make the 0-62 mph sprint in 6.8 seconds, and electric driving at speeds of up to 78mph. Being a plug-in has not hampered it being fun and brisk to drive.

Three operating modes available for selection via eDrive toggle switch: AUTO eDrive (electric driving up to 50mph, with the combustion engine enable on kick down or charge falls below seven per cent); MAX eDRIVE  (pure electric driving up to 78mph), SAVE BATTERY (combustion engine only). Average fuel consumption is a reported 134.5 mpg – we only got 45mpg but we were driving it rather spiritedly and the battery was at half charge. This mode can also raise charge state to at least 90 per cent so that sufficient electrical power remains for purely electric driving later on. 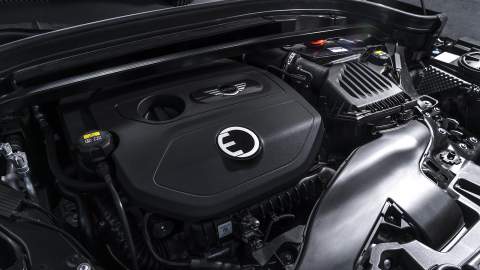 Kind of… The intelligent all-wheel drive system makes it feel grippier and more precise – push it really hard though and there’s a hint over understeer. It works by employing only one of the two power unit when the car is moving, while the other one can be additionally enabled at any time to optimise traction, ride stability and agility. The signal required for this purpose comes from the Dynamic Stability Control (DSC) unit, which continuously analyses both the situation on the road and the commands of the driver.

It is the same principle that is applied in the BMW i8, only the other way around (the combustion engine drives the rear wheels and the electric motor the front) and BMW, say it is a key factor that contributes to the ‘captivating character of this car’. In fairness compared with its rivals, the car certainly feels different and interesting on the road and while it is balanced, responsive and smooth, the VW Gold GTE is probably the better driver’s car. 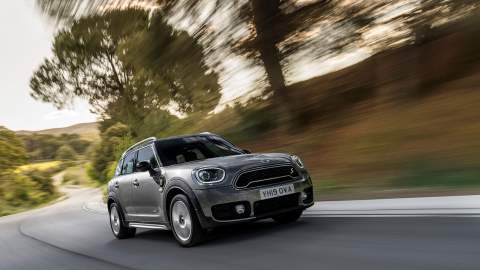 What about that 25 mile range?

It may not sound like a lot but according to statistical data set on Vehicle mileage by the Government and a National Travel Survey by the Department for Transport, the estimated average annual mileage per car in England was 7600 miles in 2018, which equates to 20 miles per day. Company cars reportedly recorded higher annual mileage as one would expect at 17,500, and while they couldn’t cover that 47 daily commute on electric only they would have the back-up of the engine.

Not only that but it can be charged at a wall box in just two hours 15 minutes and then there’s the benefits of low emissions - 49 g/km to be precise, qualifying it for free access to the Congestion Charge Zone and low Benefit-in-Kind rates. 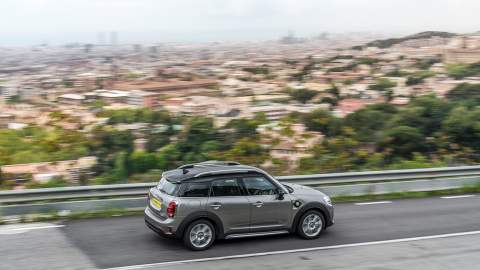 For starters there is yellow start/stop toggle switch and the instrument cluster gets a performance display, too, replacing the traditional rev counter with a gauge that also shows battery power and energy going back into the battery. Other than that it’s the well-built interior of the regular Countryman utilising quality materials and oozing character.

Outside, the connection for the charging cable is under a flap in the left-hand side scuttle, together with a model-specific “e” badge as well as a yellow “S” in the model inscription on the rear, radiator grille and door sill finishers. It’s all very discreet but unmistakable indications of the car’s trump card when it comes to emissions-free mobility. 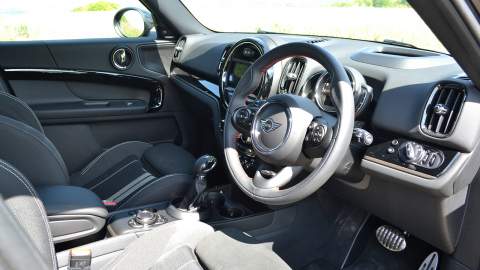 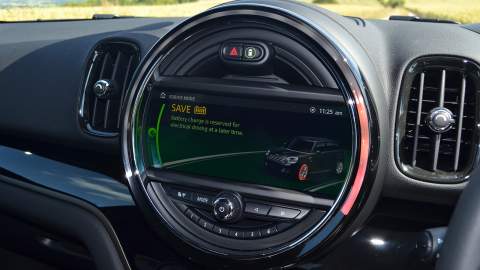 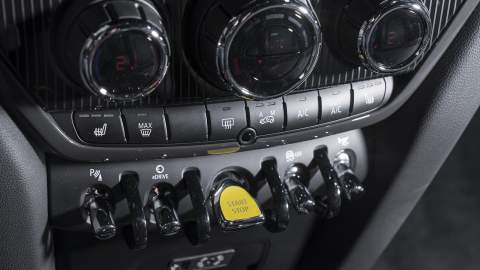 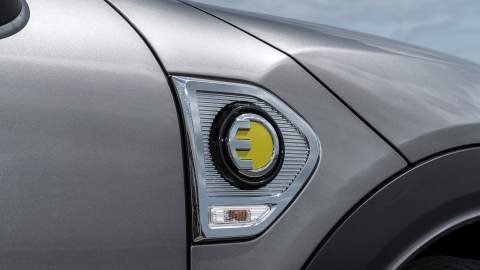 With the new MINI Electric starting at £24,300 and this plug-in hybrid option costing over nine grand more, we’d rather wait for the EV. But that’s not to say it’s the right decision for everyone. These sorts of cars serve as a stepping stone, to make the average person realise that they don’t in fact need more than 25 miles of range.  Still, it’s an easy-to-use hybrid, that despite the high price could be cheap to run – even more so for business users. 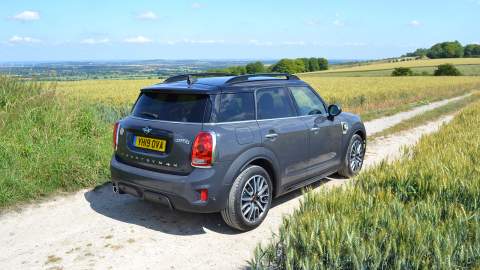