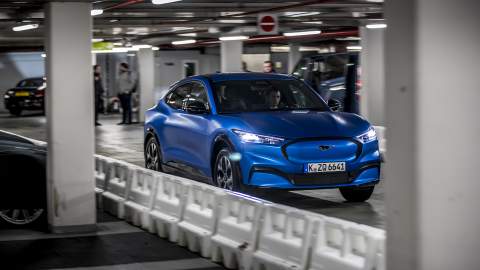 When Ford launched its all-new Mustang Mach-E in London they invited a few select journalists for a passenger ride. Here are our first impressions. 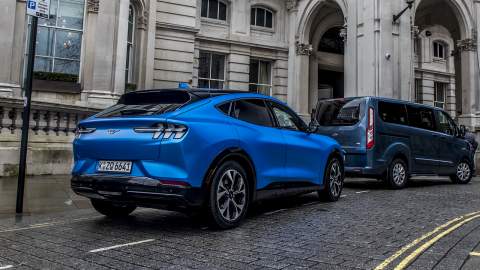 In what seems to be a rather controversial move for the die-hard traditionalists, Ford is expanding the Mustang family with an all-electric SUV that is apparently born of the same free-spirited ideals that inspired the brand’s infamous sports coupe, namely progress, fast performance and a touch of rebellion. And having now experienced the car first hand, albeit from the passenger seat, we kind of get it.

In the flesh, the car looks great. Its long, powerful hood, muscular haunches, aggressive headlights and trademark tri-bar tail lamps are all a nod to the Mustang, and thanks to advances in battery technology Ford were able to create a five-seater sporty-looking SUV that offers plenty of space inside for occupants and luggage. Think Jaguar I-PACE only more practical – it’s got a drainable ‘frunk' (front trunk) storage unit for goodness sake! Brilliant for dumping the kids in and hosing them off… sorry I mean the kids' muddy shoes. Hell, fill it with anything… ice and beer sounds good to us! 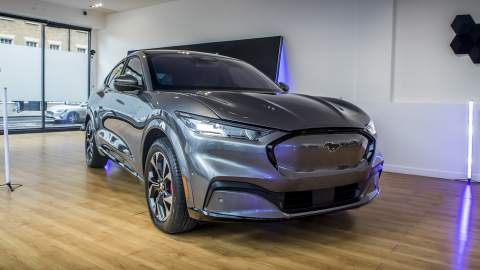 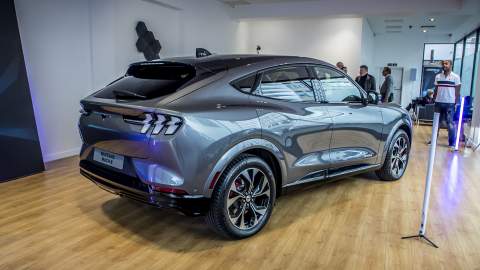 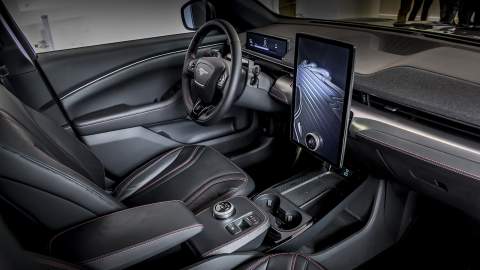 Available with standard and extended-range battery options (boasting a Tesla beating range of up to 370 miles) with either rear-wheel drive or all-wheel drive, Ford will also offer a special performance version in the form of the Mustang Mach-E GT which is targeting a 0-62mph acceleration of less than five seconds, as well as an estimated 458hp and 612lb ft of torque.

Prices for the base-level car with the 75kW lithium-ion battery will start from £42,070, and you can find out more about the Ford Mustang Mach-E here, because for now we want to concentrate on what the car is like first-hand – well riding shotgun. Our driver, Geert Van Noyen who is Vehicle Dynamics Manager for Ford of Europe, told us that the Tesla-like central infotainment screen is not yet fully functional and they are still finishing their development on the electronics, in particular the steering calibration, stability control and all-wheel drive calibration. While it may be six or so weeks until everything is complete, we’re told that the experience of a passenger ride – even in a prototype vehicle – should demonstrate the driving characteristics. 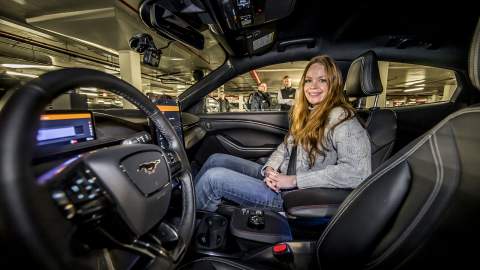 The plan was to drive from the Langham Hotel to Q Park Marble Arch in central London – a distance of one mile, and then back again. For those who know how congested the city gets during the week they won’t be surprised to hear that this journey took around 10 to 15 minutes each way. As such, there is not much to report on but with one of Ford’s vehicle development authorities at the helm we took full advantage of our time with him.  Here’s what Geert had to say:

“We have been working on the suspension tuning of this vehicle for the European market. It has been developed predominantly for use in the west, where the chassis is also built, but we’ve carried out specific tuning for Europe, so the set-up is totally different from North America.

“We obviously have been driving other EVs to help us benchmark the car, but in terms of driving dynamics we have our own character and while we look at what the competition is doing, we lean towards what we think fits the Ford brand.

“In terms of bearing any resemblance to the DNA of the Mustang in the way it rides or handles, the Mustang is a sporty vehicle, and the way that they are tuned is more akin to American sports vehicles, so they look to give it a lot of grip to go fast on the handling track. We have been focussing on creating the European Ford characteristics which is being fun to drive, nimble, and to give an immediate response to driving through twisty roads with precision and feedback. I’m not saying that Mustangs don’t have that already, but we are focussing on it a lot more, because for Europe, driving on narrow roads is very important, as is being able to cope with uneven surfaces.

“We have our philosophy and specific needs for the European market and that’s how we tune the vehicle. There are a couple of fundamental things like the tyres are different – in North America they drive all season tyres as standard but we tend to drive on summer tyres which makes a big difference. We also focussed more on the high speed stuff, because in Germany obviously you have Autobahns.

“The process is also a little different when it comes to EVs. The weight is higher compared to a conventionally powered car and the centre of gravity is lower, so you’re a little limited in terms of what you can do with the suspension tuning.

“The Mach-E has three driving modes: Whisper, Engage and Unbridled, which gives you full power. So the acceleration and responsiveness of the steering, as well as the specially developed propulsion sounds and even ambient lighting, will change with the settings. It’s also worth noting that regeneration is switchable and it offers one pedal mode which you can activate via the screen. It is similar to Nissan LEAF’s e-Pedal in that it allows the driver to launch, accelerate/decelerate and stop the vehicle by using only the accelerator pedal, but it’s not as harsh.” 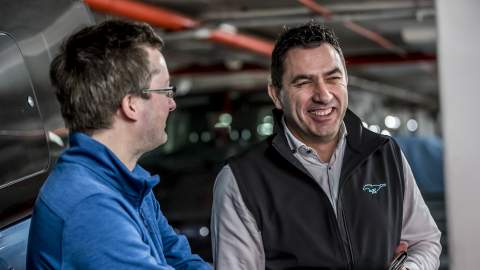 Away from the roads, we were taken to the aforementioned large underground car park situated beneath Hyde Park, where an area had been coned off for Ford’s drivers to complete a launch start and a slalom run on the return. Brembo’s all-new performance Flexira aluminium calipers certainly proved their worth – and the car impressed not just in terms of stopping distances but in making a sudden turn keeping body roll in check. It needs to have a hint of dynamic driving capability to warrant the Mustang name, and Ford’s engineers seem to have done a good job. It is worth pointing out that while the Mustang Mach-E wasn’t slow with sub-eight second 0-62 mph times targeted, it wasn’t neck-snapping Tesla Model 3 Performance quick – but that’s no bad thing. While supercar-slaying figures offers pub-bragging rights, it’s not wholly necessary or practical on our roads. 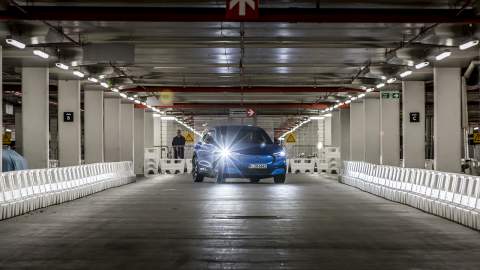 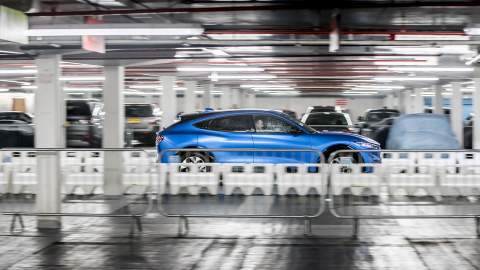 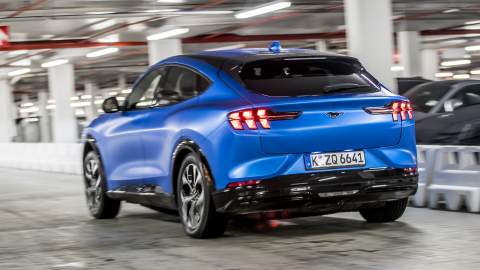 Personally I found the ride to be good. It was described as being akin to an ST Line model in the Ford range; nicely balanced and sporty, but a bit more comfortable and smoother than the pony car we all know and love. There were certainly no complaints from myself and my fellow passengers, who at over six feet tall didn’t suffer from any head or leg room issues either. The car feels like a real departure for Ford, with a state of the art interior that also feels luxurious. And if you needed any proof of how good the Mustang Mach-E looks from the outside – besides the pictures in this review – it was turning more than a few heads and getting admiring glances on the streets of London.

So, there you go, we will obviously have to wait until Autumn of this year to see whether the Mustang Mach-E has what it takes to succeed, but from our brief experience and the car’s stats it all adds up to what could be a revolutionary car for the Blue Oval. We can’t wait to get behind the wheel later this year to see what it is actually like to drive – just one thing Ford, please don’t hold the launch in central London, let’s put that headline range and nimble chassis to the test properly! 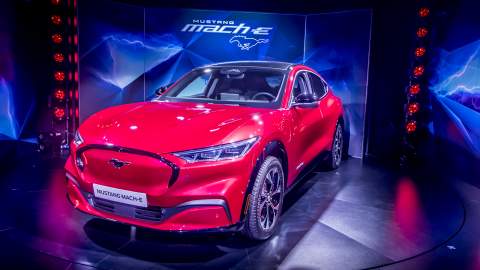