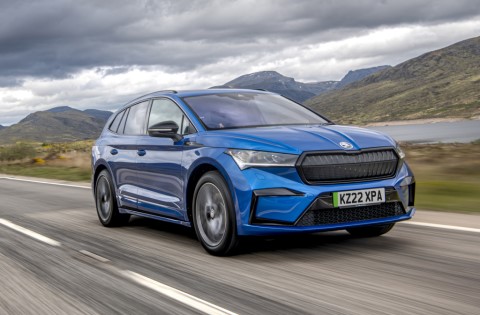 When it comes to EVs, SUVs make up a big proportion of the models on offer and as such, overall electric car sales. They translate well to electric cars, having the dimensions to swallow a decent sized battery and – often – dual motors, and still offer extremely roomy interiors.

Whatever your standpoint on SUVs, it’s difficult to argue that there aren’t some fantastic EVs that take the sports utility form. Advances in aerodynamics mean that the body style can be just as slippery as an equivalent hatchback and with the heaviest component in an electric SUV – the battery – mounted low down they don’t suffer from some of the roly-poly handling that characterised SUVs of old.

Putting people’s perception of style and fashion aside, practicality is one of the major draws of SUVs. Whilst boot size might not be that much larger than an equivalent hatch, they can be easier to get shopping and young children in and out of. Furthermore, fold the rear seats down and they come into their own as load luggers.

We’ve wracked our brains and been through the electric SUVs on sale today to bring you our top 10. All have their pros and cons, so we present these in no particular order.

We reviewed the pre-facelift, standard range MG ZS EV way back in 2019 and found it to be a capable and practical – if not remarkable – entry level EV. Since then, MG has given the car a facelift and made improvements all round. Notably, the MG ZS EV long-range now has a 72kWh battery, offering up 273 miles on the WLTP cycle and a 42 minute charging time at max speed.

The pre-facelift car’s infotainment came in for more than a little bit of criticism but the latest version, called MG iSMART, offers connectivity through a smartphone app. This allows various car functions such as climate, security and charging to be controlled remotely. A new 10.1 inch touchscreen interface with better graphics and improved functionality deals with interactions while behind the wheel. Augmenting this is a new digital instrument cluster and wireless phone charging on the higher spec Trophy model. Prices start at just £28,495 and all specifications get the plug-in car grant. 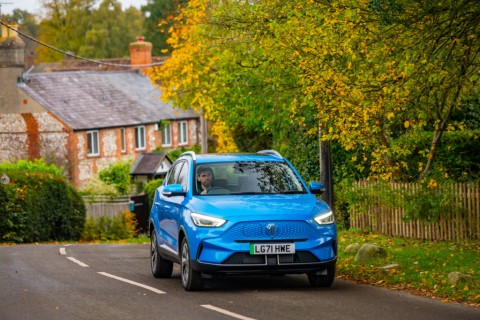 If you’re after a stylish, relatively affordable and tech-laden small SUV, you can’t go too far wrong with the Vauxhall Mokka-e. Its 50kWh battery offers up to 201 miles on a charge and can be juiced in just 45 minutes. Whilst it’s not the most engaging to drive, it’s more than competent enough for most people’s needs and what’s more, it looks great. There’s a decent amount of room for what is a compact SUV, too.

All specifications of the car come with a good amount of tech and safety features with high levels of connectivity and a plethora of active driving aids. Vauxhall also knocked £3k off the price of all spec levels since the government reduced the plug-in car grant scope, so even the most expensive Mokka-e will only set you back £30,495 on the road 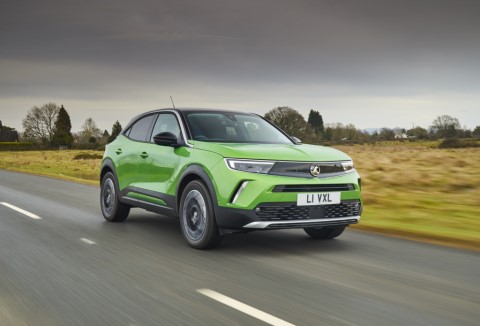 Ford’s first commercial battery electric vehicle had a lot riding on it, not least of which is the Mustang name. Happily, Ford has nailed it with the Mach E, which simultaneously manages to be stylish, full of useful and useable kit, and crucially, exceedingly efficient in the real world. Ford has achieved 6.5 miles per kWh in a real world drive between Lands End and John O’Groats, and whilst that’s unlikely for most of us, 4 miles per kWh isn’t. Two battery sizes (75kWh or 99kWh) mean a range of between 273 miles and 335 miles.

The Mach E comes with a good chunk of kit, including a 15.5 inch infotainment screen and all the usual means of connecting the car to your phone. Up to 1420 litres of space isn’t to be sniffed at either. Prices start at £42,530 for the rear-wheel drive car. 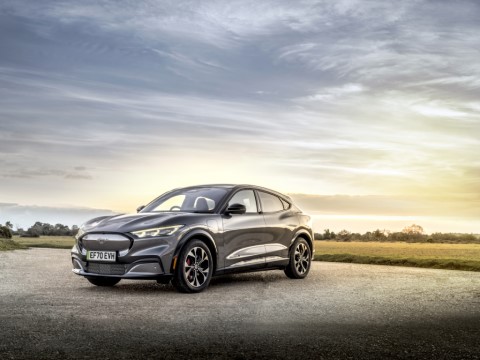 The first of two EVs that use Hyundai Group’s E-GMP platform that make it onto this list, the Hyundai IONIQ 5 scored a very solid 4/5 when we reviewed it. Strictly speaking, it’s a ‘CUV’ – crossover utility vehicle – rather than a proper SUV, but it does effectively the same thing. Quirky styling and innovative 400/800 volt architecture for ultra-fast charging define the IONIQ 5, and with a range of 300 miles with the 73kWh battery or 238 miles with the 58kWh battery, it’s very useable.

Hyundai’s styling is more than skin deep and the IONIQ 5 represents a very functional and stylish space inside, with two 12.25 inch displays for the driver and infotainment. It’s a comfortable and spacious car, with 527 litres of boot space with the seats up, capable of swallowing a family and their luggage, then whisking them down to Devon on a charge. It starts at £37.600. 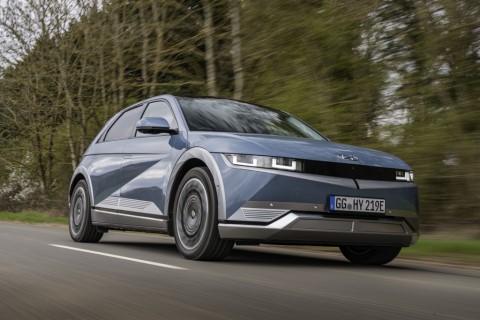 Kia’s EV6 is the second car in this list based on the E-GMP platform, so architecturally at least it has an awful lot in common with the Hyundai IONIQ 5. The EV6 is also not a ‘proper’ SUV, but with a raised ride height, it has many of the attributes. It’s a very stylish car and all UK variants have a 77.4kWh battery with the longest range variant capable of 328 miles. Even the most powerful variant currently available (with 321bhp) will crack 300 miles.

As standard, buyers get a versatile cabin, four USB charge ports and five 12 volt sockets, ambient lighting and a dual 12.3 inch display system with all the usual connectivity and voice control. Various driving assistance, active and passive safety systems make the Kia a safe car with autonomous driving features. Prices start at £40,945 on the road. 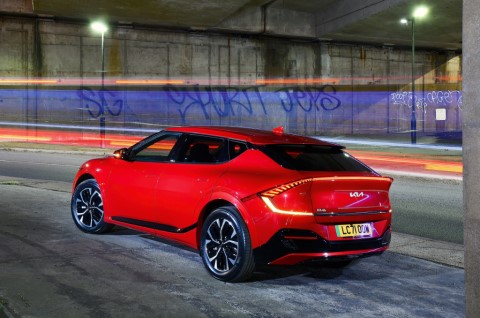 Another four star car on our list, the Volvo XC40 Recharge hit most of the spots we look for in an EV when we reviewed it, with our criticisms being about detail rather than our overall impression. That overall impression is of a very well thought out EV with superb performance, quality design and build, and Android-based technology that just works. With the performance on offer (0-62 in 4.9 seconds) the Volvo can be a bit juicy, but well over 200 miles is still the order of the day from its 78kWh battery.

As a place to be and car to drive, it’s very refined and does everything you’d expect of a Volvo – i.e. highly capable but in an unfussy way. The Android-powered operating system is slick and all specifications come with plenty of equipment as standard. There’s even a single motor variant which starts at £43,550 and achieves nearly the same range with its 69kWh battery vs. the dual motor, which starts at closer to £50,000. 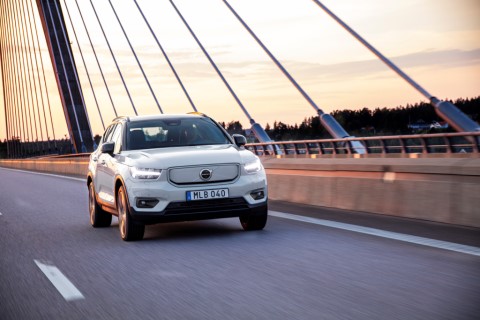 Audi’s Q4 e-tron is – in effect – its ‘entry level’ electric SUV. Based on the VW Group’s MEB platform it shares the same gubbins as most of the electric cars from Volkswagen and its Group brands. This is no bad thing, as the Audi is a compelling choice for people who want the four rings over a Škoda or Volkswagen. Two battery sizes and three power outputs are available, ranging from 52kWh and 168bhp to 77kWh and 296bhp. If you want range, the sweet spot is the 201bhp car with the 77kWh battery – good for up to 316 miles on the WLTP cycle.

We felt that the interior craftsmanship in the Audi was a step up from its VW and Škoda brethren. It’s also a practical car, with 520 litres of boot space on offer and well thought out storage throughout the cabin. The infotainment and touch interfaces work well, and Audi’s Virtual Cockpit is a treat. You do, however, pay for all this quality, with the Q4 starting at £40,750 in its lowliest form. Start adding options and you can spend well over £70k. 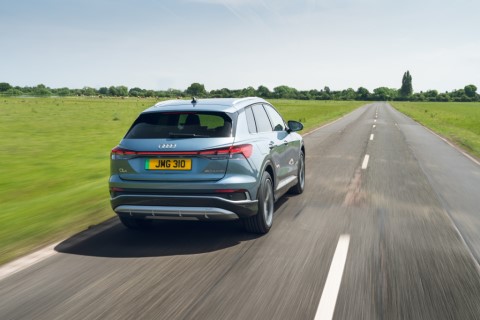 It’s hard to choose between the Škoda Enyaq iV and Volkswagen ID.4 as the second entry on this list for MEB-based EVs, but in our review the Škoda nabbed it by half a point over the VW. It’s the Czech firm’s first EV, and with VW Group’s backing and knowledge behind it, they’ve created a corker of an SUV. Powertrains are broadly similar to those in the Q4 e-tron, so there’s the option of single motor variants with 177bhp or 201bhp, or a dual motor version with 296bhp. A 62kWh battery offers up to 256 miles whilst an 82kWh (net) unit offers up to 333 miles.

As we’ve come to expect with modern Škodas, it’s well specified and includes a free-standing 13 inch central display and a digital dash with optional head up display. This is augmented with loads of connectivity and the latest VW operating system. It’s also big inside, with 585 litres of luggage space with the seats in place and 1710 with them stowed – more than its MEB-based rivals. Starting at £34,850, the Enyaq iV undercuts its rivals and is a bit of a steal. 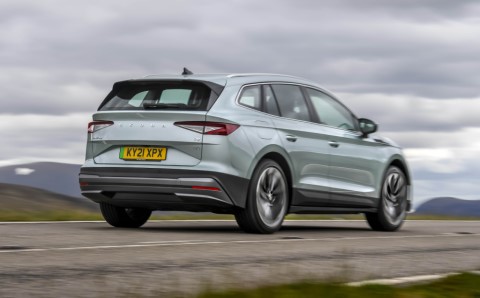 BMW’s iX3 is at the premium end of the electric SUV spectrum and is one of the more expensive cars on this list, but it’s not without plenty of merit. It’s BMW’s first volume EV (discounting the i3) and has been designed to look and feel as close to its petrol cars as possible. Its 282bhp, rear-drive chassis offers strong, linear performance and thanks to a 74kWh battery, it’s capable of up to 279 miles on a charge. It’ll charge at up to 150kW, too.

There’s the latest version of BMW’s Live Cockpit with a 12.3 inch digital display and a 10.25 inch central display. It also gets voice, touch and gesture control. As a daily proposition for the family, it stacks up well thanks to a 510 litre boot and high-spec interior. It isn’t cheap, though, with prices starting at £60,970. 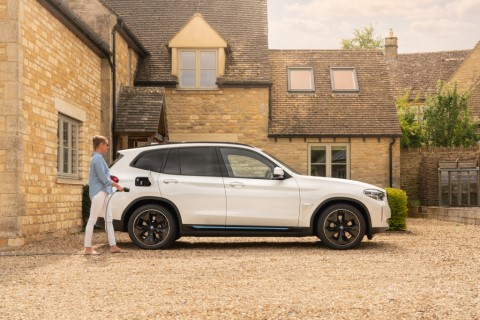 It’d be remiss of us to include a Tesla in this article, and with the Model Y the brand has created a compelling compact SUV. Sitting between the Model 3 saloon and Model X large SUV, the Model Y brings the best of both worlds with the sportiness of the former and elevated driving position of the latter. Whatever spec you go for you’re going to get there quickly with 346bhp the minimum available in the Long Range, and 483bhp in the Performance. An 82kWh battery offers 315 miles in the Long Range and 298 miles in the Performance with charging at up to 250kW meaning a full charge in 20 minutes is possible.

There’s a 15 inch central touch interface and the entire tech that Tesla is famous for. The Model Y also gets smartphone-based keyless operation and if you want to shell out, the brand’s Enhanced Autopilot system. A total of 2100 litres of luggage room sweetens the deal. Prices for the Long Range start at £54,990. 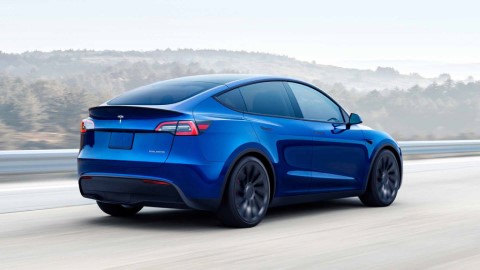