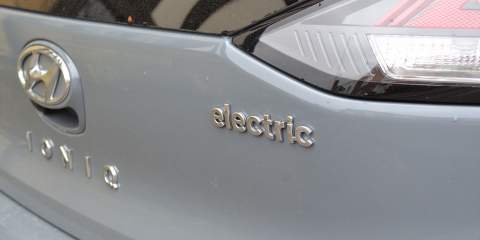 In 2019, the Hyundai IONIQ Electric was treated to a mid-cycle refresh, is it enough to stay competitive now though with a lot more players in the electric vehicle segment? We find out

When it was launched back in 2016, the IONIQ Electric was the world’s first car to offer three electrified powertrains – hybrid, plug-in hybrid (which you can read about here) and full electric. Three years later, with a growing number of other manufacturers launching their first electric vehicles, the IONIQ needed to up its game, and in 2019 it benefited from a raft of technological features, refreshed look, increased range and more power. We have it on test for a week to see how it stacks up against its competitors. 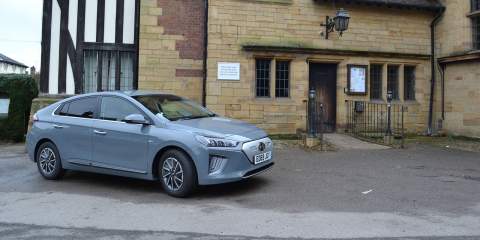 One of the key differences on the refreshed model is its permanent magnet electric motor, which  has been exchanged for a more efficient version, to deliver a maximum power of 134bhp (up from 118bhp) and 291lb-ft of torque (which remains the same). It has helped bring the IONIQ Electric’s 0-62mph sprint time down by several tenths to 9.7 seconds and while it’s not a heavy car at 1527kg (kerb weight) it feels sluggish compared to the progressive power delivery of other EVs, even in Sport mode.

It’s also not the best handling car we’ve sampled either. The suspension setup consists of Macpherson struts up front and torsion beam out back (to accommodate the battery pack) with gas shock absorbers all around, which translates into a less sophisticated system compared to the multi-link rear suspension of the hybrid. Yes, it’s a comfortable ride (on smooth roads at least, on rougher surfaces it jiggles slightly), but it’s also rather roly-poly through the corners. The steering is too light and doesn’t communicate much about what the front wheels are doing when you’re pushing it really hard – it’s not what you’d call dynamic.  Also you could really feel the wind buffeting the car when driving down the dual carriage way. On the plus side, visibility out of the sides is great – with no obstructions whatsoever from the B pillar, shame the same can’t be said when looking out the back with a bar across the screen. While some may label the stepped glass tailgate ‘neat’ or ‘cool’, what it actually does is hampers visibility.

Taking a cue from its Kona Electric sibling, the new IONIQ Electric adopts 1-paddle driving capability, which allows drivers to stop the car by simply holding onto the left paddle shift lever with often no need to engage the braking pedal. Otherwise, there are three levels of brake generation, which we found to be the best compromise – at its strongest setting (level 3) – for the majority of the time.

The new IONIQ Electric also features Eco+, which supplements the standard Eco, Comfort and Sport driving modes. By selecting the Eco+ mode, drivers reduce their energy consumption and the car’s remaining energy can be extended during unforeseeable emergency situations. 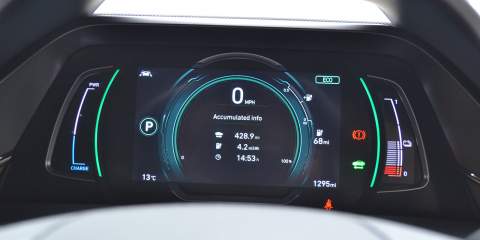 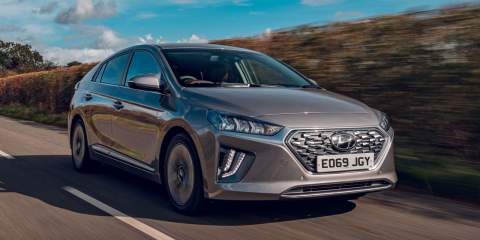 Drivers of the new IONIQ Electric can now enjoy 36 per cent added energy capacity and a WLTP-tested average of 193 miles between charges thanks to the battery which has been upgraded from 28 kWh to 38.3 kWh. It is fitted standard with a 7.2 kW on-board charger – an upgrade from current 6.6 kW – for Type 2 AC charging. Using a 100 kW fast-charging station, the battery can reach 80 per cent charge in 54 minutes. We never saw the claimed 193 miles – after a full charge on a cold day, our IONIQ showed 172 miles of range (which is more than enough for average commuter driving or typical family outings the IONIQ is best suited to). It’s worth noting – unlike a lot of competitors we’ve driven it’s pretty efficient, on a mix of city roads and motorway, it averaged four miles per kWh. 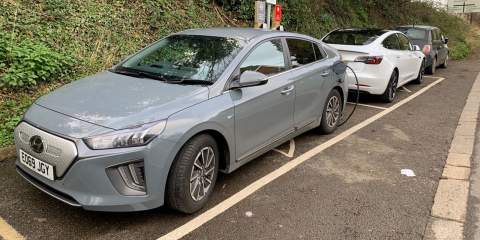 Looking rather similar to a Toyota Prius it’s not the most prettiest of cars, but Hyundai has tried to tart it up for the 2019 update.

Outside the new IONIQ Electric has been updated with silver and anthracite mouldings for the front and rear bumpers, a new distinctive pattern on the closed front grille (with active air flaps to aid cooling), redesigned 16 inch alloy wheels and new LED daytime running light bezels. The LED head and taillights have been completely redesigned, too, to help make the IONIQ Electric stand out at night. It is available in nine exterior paint colours, including four new ones.

Inside, customers have the option of four types of leather, in addition to standard Fossil Grey cloth, while the dashboard trim is in dark chrome and new blue ambient lighting helps to give it a more premium look and feel. If you opt for the clear, easy-to-use and responsive 10.25 inch AVN screen (which now protrudes from the centre console rather than sitting flush), the control panel for heating and climate has been redesigned with touch-type control buttons and a sleek, glossy finish. The standard 7 inch LCD console display has been improved with mood lighting to visualise the different drive mode themes and everything is easy to use. Rather like the exterior it’s not particularly inspiring, but overall build quality and finish is good, plus it’s a comfortable place to be.

Luggage capacity of 357 litres isn’t bad (with a handy section under the boot floor for cables) and there is certainly no shortage of stowage space, with big door bins, cup holders between the front seats, plus storage under the arm rest and centre console. Rear, leg and head room isn’t the best-in-class, but it’s not terrible. 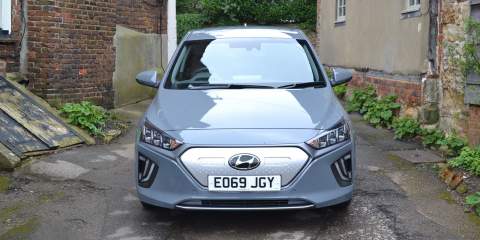 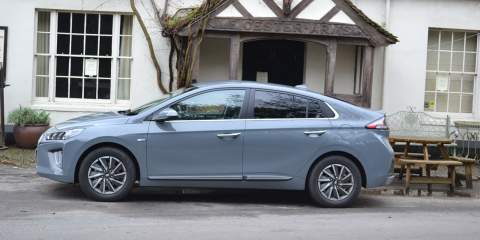 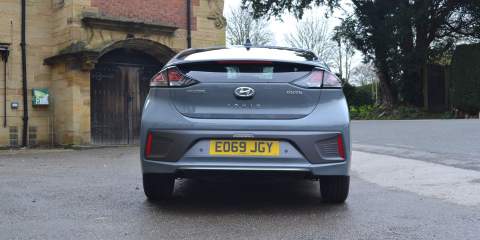 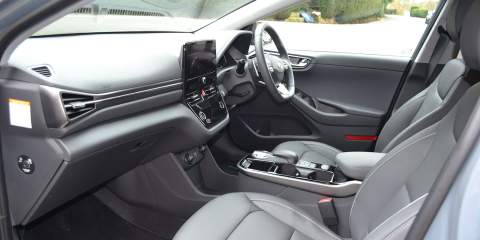 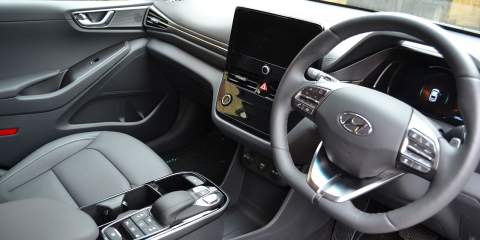 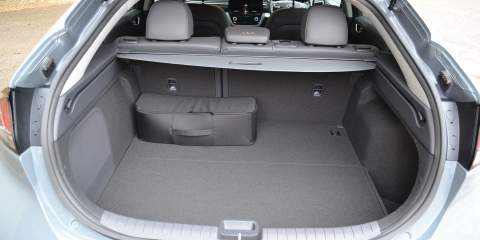 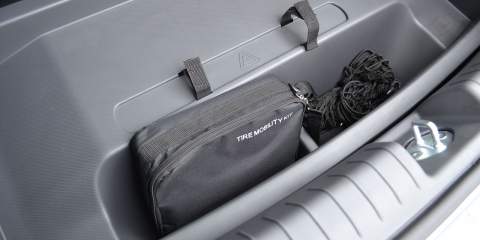 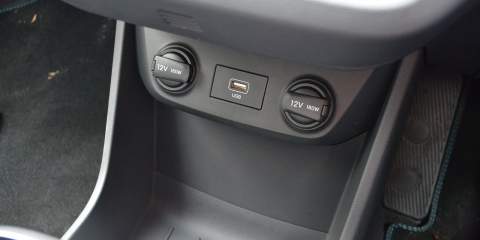 The new IONIQ Electric features Hyundai Bluelink, which is basically a connected car system for drivers to remote control the air conditioning and charging, while all versions allow remote lock or unlock via a smartphone app. It has also introduced eCall, which automatically dials the local emergency service should the airbags deploy or the call button (located above the rear-view mirror) is pressed with relevant information, and Hyundai LIVE Services when customers include the optional 10.25 inch Audio Visual Navigation (AVN) system. This gives drivers a five-year free subscription offering up-to-the-minute information about weather, traffic, speed camera warning (where legally allowed), on- and off-street parking, live nearby-dealer information as well as identifying nearby charging stations and live POI Search.

It was fitted to our press car and we have to say that it was very good, with the system displaying a wide variety of useful information across its split touch-screen. You can edit displayed widgets and icons, and it’s very intuitive to use. Also as well as Android Auto and Apple CarPlay which is standard on the base onboard system, with the new Multi-Bluetooth function (included with 10.25 inch AVN option only) you can connect two phones at the same time to listen to each phone’s music through Bluetooth streaming.

Optionally available are Lane Following Assist, Intelligent Speed Limit Warning, Smart Cruise Control with Stop&Go (which we found to be particularly good), Leading Vehicle Departure Alert (which notifies the driver when the vehicle in front has driven away from a stop), Blind-Spot Collision Warning and Rear Cross-Traffic Collision Warning. The lane detection and steering assist can get confused quite a lot and if you forget it’s on it can be a minor nuisance. 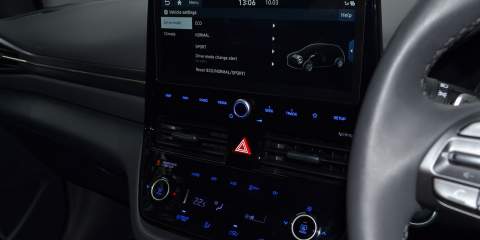 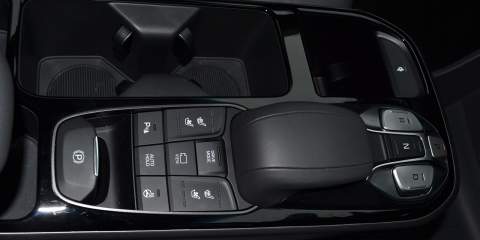 Based purely on cost and range, we would not recommend you buy a Hyundai IONIQ Electric. Starting from just shy of £30,000 there are now other EV competitors that are cheaper to buy and also have much longer ranges. Looking at it in isolation as a practical five-seat family hatch, or a commuter car, it’s a well-rounded product – perfect for those that like function and dependability but don’t care too much for performance or dynamic driving. The EV market is changing at a considerable pace, making this car not as competitive as it once was. If you’re a Hyundai devotee and it fits in with your lifestyle and budget, then it may be for you – otherwise it’s a tough sell. Its sister EV, the Kona Electric, has more range of course but it’s more expensive. It’ll be interesting to see how it compares to the IONIQ and we can’t wait to get one on test. 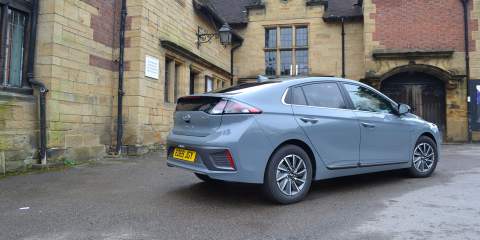