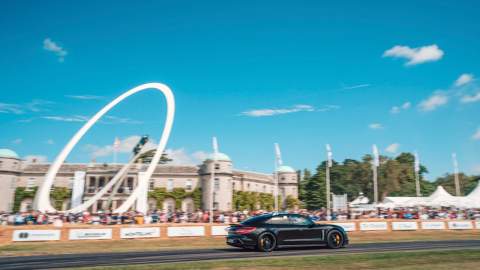 Big EV presence at the Goodwood Festival of Speed

Just in case you missed it (and if you did, how did you manage that?!), this past weekend was the Goodwood Festival of Speed – one of the UK's foremost motoring events. Over the weekend some 150,000 people flocked to Goodwood House in West Sussex to enjoy what is always a raucous mixture of sound, smells and speed. 2019 was no different, the theme this year being “Speed Kings – Motorsport's Record Breakers”, celebrating feats of speed from land speed records to fastest laps.

Now don't get us wrong, we still enjoy the sound of turbos spooling and V8s howling, the smell of petrol fumes and unruly amounts of tyre smoke (if it’s a special occasion), but the Festival of Speed moves with the times and the biggest headline of the weekend was created by an electric car...

Everything at the Festival of Speed revolves around the action that takes place on the famous 1.1 mile hillclimb that runs through the grounds of Goodwood House. Whilst most runs are done with spectacle in mind, many drivers take it very seriously. Nick Heidfeld did 20 years ago in his 770bhp McLaren-Mercedes MP4/13 F1 car, setting a time of 41.6 seconds. Now, however, the record belongs to the electric Volkswagen ID.R – adding to its records around the Goodwood circuit, Pikes Peak and Nürburgring.

Romain Dumas, who has been at the wheel for each of the ID.R's records, set a blistering time of 39.9 seconds in the 671bhp EV – 1.7 seconds quicker than the F1 car. The run was, frankly, astonishing, and the ID.R's range of talents seem to be endless. We certainly think that VW has nailed the Motorsport's Record Breakers theme in superb style! 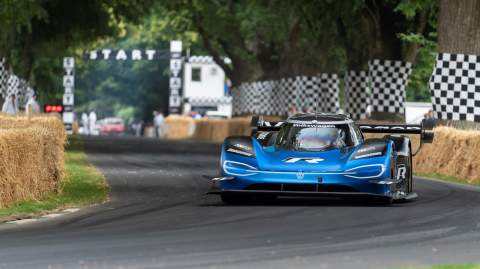 As well as making a splash on the track, Volkswagen gave its ID.3 a rare public outing. Bedecked in a psychedelic two-tone colour scheme, the appearance of the ID.3 follows the news that over 15,000 people have put down an initial deposit for the model across Europe. As we reported back in June, the ID.3 will offer a range of between 205 and 342 miles depending on the battery and cost similar to a nicely specced Golf.

Debuts and demonstrations of road-going models

Porsche's Taycan has been doing the rounds of various race tracks ahead of its official launch in prototype (and lightly camouflaged) guise and it was no different at the Goodwood Festival of Speed. The German brand's four-door EV was driven up the hill by none other than F1, Le Mans and Porsche legend, Mark Webber. On the subject of Porsche, it also brought a Formula E single seater which, unfortunately, didn't make a run up the hill. 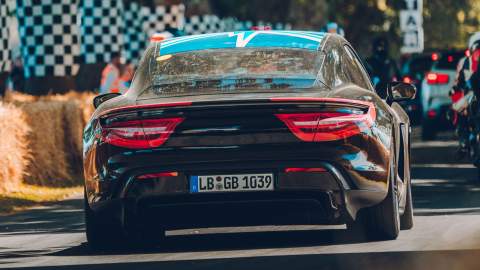 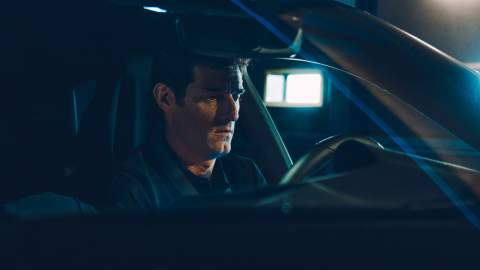 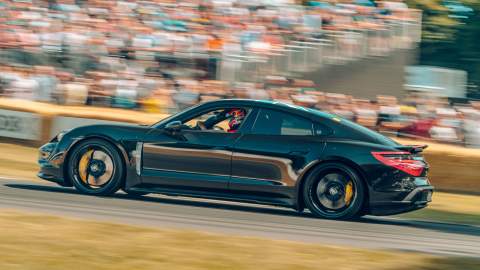 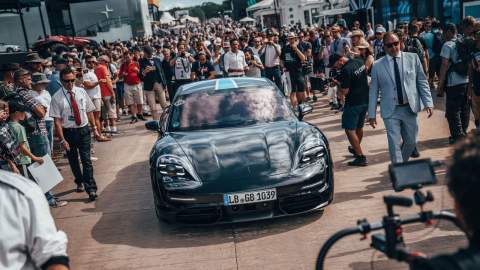 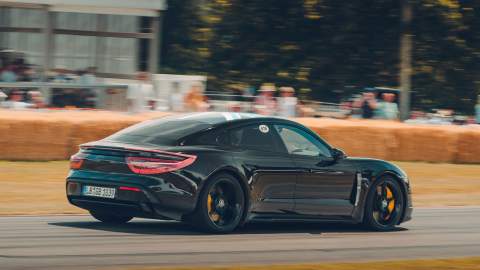 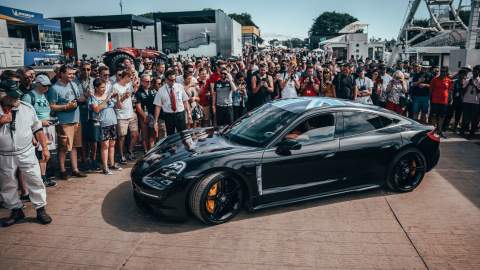 Remember the solar-powered 'One' from Dutch EV start-up Lightyear that we reported on? Well it made its public debut at Goodwood, with the only car currently in existence available for people to take a look at. Truly 'One' of a kind.

Swedish performance specialist Polestar brought their all-electric Polestar 2 along to the Festival of Speed – a car that promises to be a competitor to the Tesla Model 3 when it is launched in 2020. Boasting very Tesla-esque 396bhp, 0-62mph will take less than five seconds whilst the 78kWh battery should see a real-world range of 310 miles. It's set to be available from £34,000, however a launch edition will retail at around £51,000. 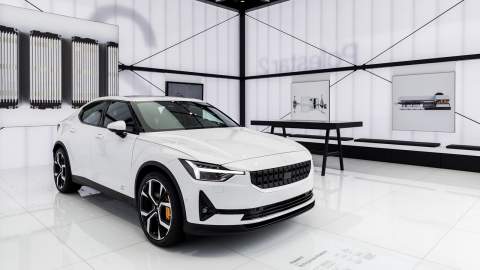 Honda not only had its new e on its stand, it also ran it up the hill, demonstrating that low centre of gravity and rear-wheel-drive handling prowess. 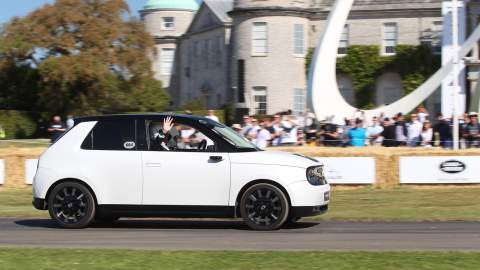 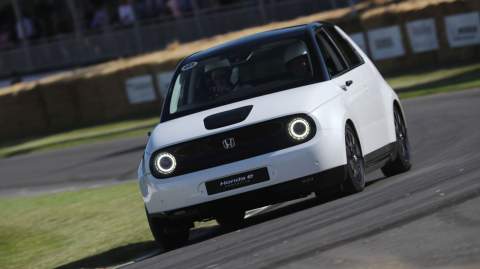 EV SUV rivals, Jaguar's iPACE and Mercedes' £66,000 EQC were on display, and Jaguar even ran a liveried iPACE up the hill. The British brand also had its Range Rover Sport PHEV in attendance – a plug-in hybrid that's somewhat flown under the radar. Continuing the British theme was the Clubman PHEV on MINI’s stand. 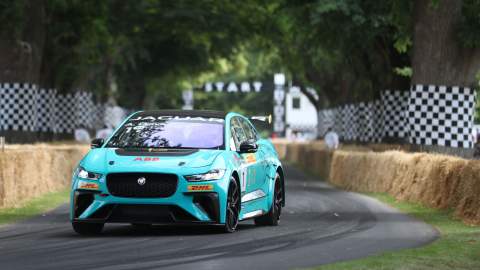 Theoretically powered by two motors producing a combined 456bhp and a 100kWh battery offering nearly 500 miles of range, like the Ami One the 19_19 is purely a concept – for now...

Finally, Lotus promised a sneak peak at its up-coming Type 130 electric supercar which will be called the Evija. The peak was very sneak, with the bare minimum of glimpses via a light-up display on its stand, but we don't have long to wait until the official unveiling which will take place on the July 16, so watch this space! 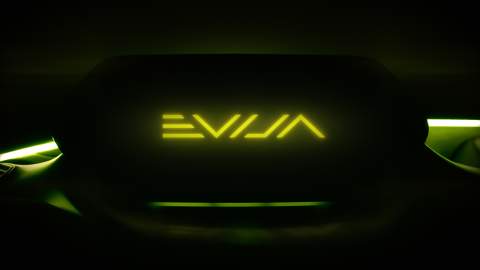 Inevitably one of the most popular areas of the entire Festival of Speed is the Michelin Supercar Paddock. Usually the reserve of cars with many cylinders in a V-configuration, an increasing number of EVs are gracing the area. Perhaps the most striking of these was the Dendrobium D-1 which is a British-designed (and, as planned British-built) all-electric hypercar promising 1800bhp and a 200mph top speed.

Also in the paddock was the Charge Cars Mustang – a Bullitt-style fastback aping the classic 60s shape but with an all-wheel-drive, all-electric powertrain. With a 64kWh battery pack, Charge is aiming for a 200 mile range, but also a 0-60mph time of around 4.5 seconds. It's certainly a car with built-in rarity: Charge is looking to build just 499 of them. Interestingly it was voted the Michelin Supercar Paddock Showstopper of the Festival – the first all-electric winner. 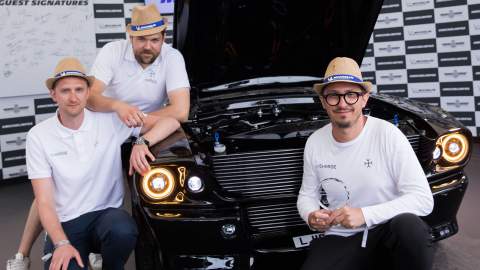 New race series, Extreme E, gives us a hit of what's to come with the Odyssey 21

Extreme E is a new race series which will pit off-road SUVs against one another over some of the most extreme terrain in the world. Sounds like a mash-up of WRC and Dakar, right? Well yes, it kind-of is, but the difference is that the SUVs in question are electric. The Odyssey 21 is one such vehicle and it made its debut at Goodwood.

From the Sahara to the Arctic, Extreme E will pit these 536bhp monsters against one another from 2021 onwards. The Odyssey 21 is a base model for the series, so whilst it gives us a glimpse of what Extreme E vehicles will look like when the series arrives expect a variety of silhouette-style cars that replicate everyday road-going variants. 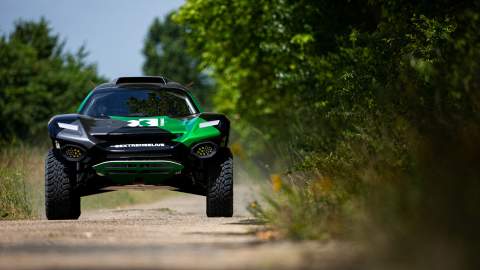 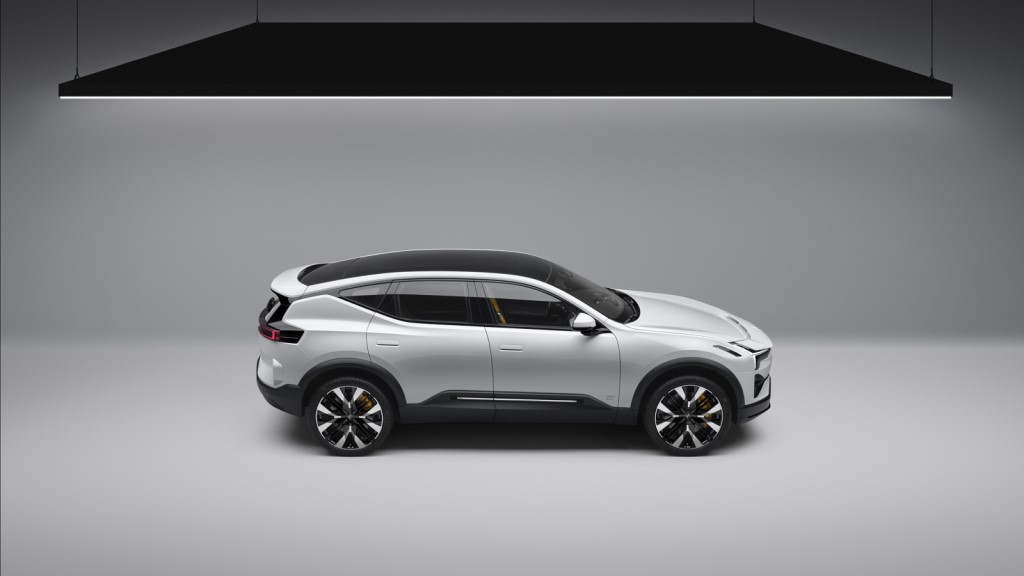