In the past, Ford has marketed its Transit as “The Backbone of Britain” - highlighting the fact that the small businesses which make up the vast majority of companies in the country rely on it - and vans like it - day-in, day-out. But it's also a segment of the market that has been comparatively slow to adopt alternative powertrains. However, change is happening.

In a segment-first, Ford has released its Transit Custom with a plug-in hybrid powertrain. As well as the load-lugging Transit, Ford has also applied its PHEV technology to the Tourneo Custom – an eight-seat people mover.

Other manufacturers are also offering their commercial vehicles with alternative powertrains, but unless you're in the market they've probably flown under your radar. With ultra-low emissions zones being implemented in cities across Europe, however, the commercial sector has had to adapt.

Both the Transit Custom and Tourneo Custom have an interesting powertrain, in that it is a range-extender, where the internal combustion engine provides power to the electronic drive rather providing power directly to the wheels. Instead, the front wheels are driven by a 125bhp electric motor from a 13.6kWh battery. A 1.0 litre ecoboost petrol engine acts as the range extender, firing up when the battery reaches a minimum state of charge, or power demands are such that it is required.

This setup makes sense, given that commercial vehicles rely on torque to carry payloads – 1130kg in the case of the Transit Custom – and whilst an excellent unit, Ford's 1.0 litre ecoboost petrol engine isn't a bastion of low-down twist. Furthermore, the small petrol unit is efficient and light, enabling the Transit Custom to achieve up to 91.7mpg and emissions as low as 60g/km. On battery-only power the Transit Custom can drive up to 35 emissions-free miles and via a regular plug takes 4.3 hours to charge. This is reduced to 2.7 hours using a Type 2 AC charger.

The Tourneo Custom comes with a minor weight penalty thanks to its eight-person carrying capacity, and whilst it shares the same drivetrain as the Transit Custom it doesn't quite match the latter's efficiency. It's still impressive for a van of this type, achieving up to 79.1mpg and 70g/km of CO2, as well as a battery-only range of 33 miles. Its interior space is also exactly the same as its conventionally-powered counterparts. 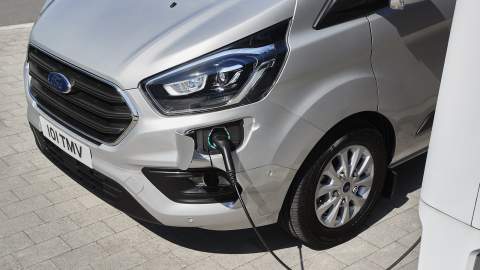 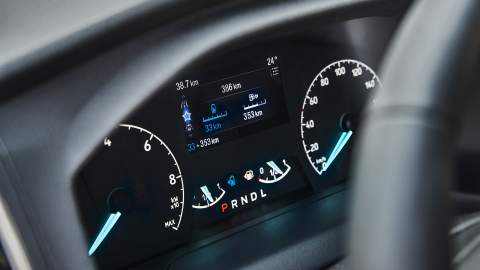 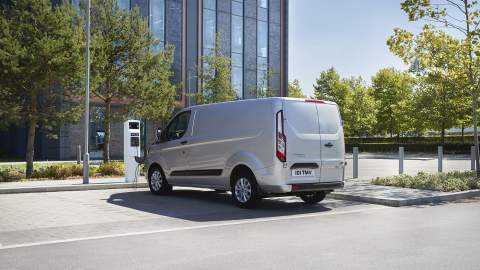 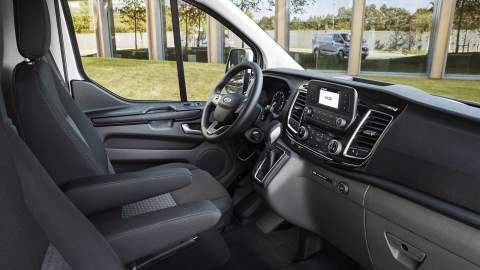 What else is out there?

Ford's insistence that plug-in hybrid powertrains are the best solution for light commercial vehicles is a rarity in the manufacturing world, however it does have merit. Its own extensive fleet study found that 75 per cent of driving in central London was undertaken on electric-only power.

Despite this, most other brands have gone straight down the electric route, and there is method in this way of thinking; when aimed at urban-based companies carrying goods over small distances, potentially within low emissions zones but will easy access to charging infrastructure, they're a no-brainer. Here's a few that are currently available in the UK.

A direct rival to the Ford Tourneo Custom, the EQV 300 is an eight-seat passenger van with an impressive 250 mile range thanks to a 100kWh battery pack and 201bhp motor. It was shown off at the recent Frankfurt Motor Show and will be on sale soon. It makes sense that Mercedes would utilise the powertrain for load-luggers in due course, even if it is yet to say so. 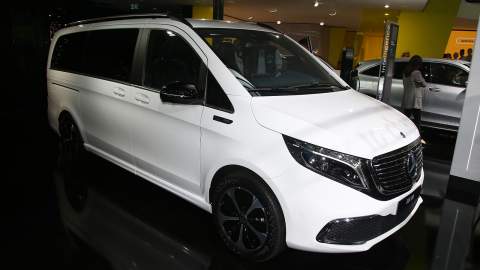 Renault vans are stalwarts of many fleets across the country, with the French manufacturer having gotten in on the EV van act early. The Kangoo Z.E. has been the biggest selling electric van on-and-off since 2016 and has a 124 miles range. The Master Z.E. has a payload of 1100kg, comes in three sizes and in the real world, will do 75 miles. 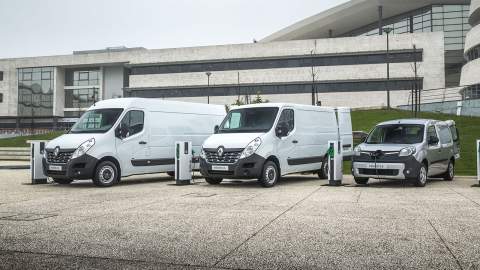 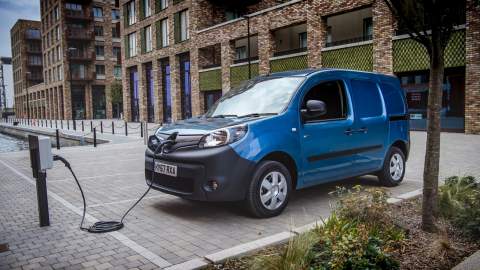 The other big player in the small van market (especially in the UK, which is its biggest market), the Nissan e-NV200 has been knocking around since 2016. A 40kWh battery pack was introduced this year, giving the van a Kangoo-beating range of 174 miles. 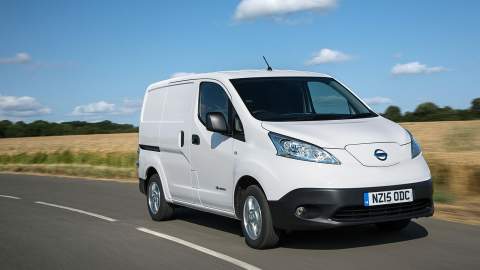 Sharing the same architecture and powertrain, these vans sit behind the Renault and Nissan in the popularity stakes. They make do with a 106 mile range, and despite the conventionally-powered versions getting new styling, the electric models retain the older styling, perhaps showing that they're a bit of an afterthought for PSA Group. 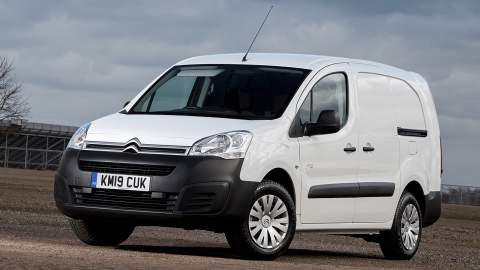 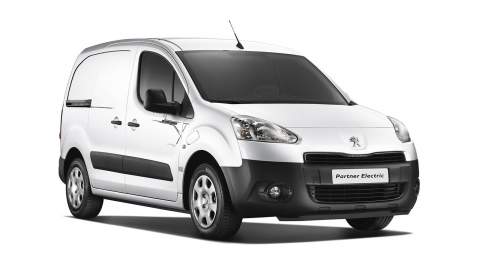 In the next couple of years we're expecting a glut of electric vans to hit the market. The Volkswagen e-Caddy is new on the market and the e-Transporter is due early next year with the larger e-Crafter due in 2021 once VW gets its backside in gear to produce them in right-hand drive. Vauxhall has an electric Vivaro planned for next year, whilst Citroen, Peugeot and Fiat all have large electric vans in the pipeline.