NIO, the electric vehicle start-up boasts swappable batteries, a dash-mounted digital assistant and online-only sales yet few people in the Western world have heard of the company. We meet up with Thomas Rice-Jones, Marketing and Communications Director at their London office to learn more.

Since NIO was founded on November 28, 2014, it has grown at quite a pace with over 7800 employees around the world. Can you tell me a bit more about its founder?

We were founded by William Li who is a very successful entrepreneur and business man, and set up one of the first internet companies in China, so he’s very forward thinking. He is best known for BitAuto, which is a major online content marketing service for the automotive sector in China. NIO was really him reaching a point in 2012 one day when he looked out of the window of his flat in Beijing and his wife was about to have their first child. Unable to see the building on the other side of the road because of the smog, he wondered how he could try and do something to help with the huge issue of air quality. He drew on his background and his strength in automotive and the internet and fused these together to form NIO. The company was set up with six initial investments and these grew over the months and years. We had investment from big tech companies such as Tencent Holdings Limited, Lenovo, Baidu and Investment Houses, and in September last year we were listed on the New York Stock Exchange, which was a big milestone for the business.

While NIO is a Chinese electric vehicle company headquartered in Beijing, after five years of rapid growth you’re a global organisation. Tell us more.

Yes, that’s right. While our R&D takes place in Shanghai, with manufacturing in a town called Hefei just outside, we also have offices in Munich where the vehicle designs are made, we have our US headquarters and autonomous AI driving development in San Jose, and our performance engineering offices in the UK, where we simulate and test concepts. The UK is also home to the Formula E racing team that NIO is now the title sponsor of. Previously, NIO has competed in the ABB FIA Formula E Championship since it was established in 2014 and secured the inaugural FIA Formula E Drivers’ Championship in July 2015.

Is this why you’ve been able to bring a car from the drawing board to the production line within three years?

Yes, in fact we have launched two SUVs now, the ES6 and the ES8. Our naming lexicon is that E stands for electric, S is for SUV and P [so their EP9 – more on that later] is for performance, the number is the power which we liken to the coffee strength for Nespresso pods!

The ES8 was officially launched at the end of December 2017 and deliveries to users started at the end of June 2018 which we’ve been busy with for well over a year now. We have positioned ourselves as a premium brand, as the automotive industry in China hasn’t been renowned for its quality – we want to change that and be successful on the world stage. It’s a seven seater SUV and it has great acceleration, hitting zero to 62 mph in 4.4 seconds.

The year after launching the ES8 we launched the smaller five-seater ES6. It’s targeting a different demographic as it has a sportier feel to it, and its doing well. It includes an intelligent in-car fragrance system, which can adapt the fragrance to the user’s mood. In the third quarter of 2019, deliveries consisted of 4196 units of its ES6, and 603 units of the ES8. We shipped 2019 units in September alone, including 1726 ES6s and 293 ES8s.

Prices start from £41,000 and increase to £50,000 depending on which model you choose. NIO also offers a battery renting structure, similar to Renault ZOE’s scheme.

What is so unique about the ES6 and ES8?

Not only are these vehicles electric but they are smart, reliable [NIO has recently ranked highest in J.D. Power’s Inaugural China New Energy Vehicle Experience Index StudySM] and provide the latest in technology.

The cars have the first on-board AI assistant for example – she is called Nomi and speaks Mandarin of course, and works on voice recognition. The idea is that anything you can operate via the touchscreen can be done by asking Nomi, such as operating the windows or sunroof, but she can also provide information, tell you about the weather, take selfies and even sense your mood and learn your driving style. This has become a stand-out feature of the NIO.

We wanted to create a mobile living space, so the interior habitat is well thought-out, too. The front passenger seat can recline and has a foot rest, and also has what is called ‘Childcare Mode’ where you can slide right back to the second row tend to a child in the rear of the car. There are lots of little touches which make it easier to live with.

The cars also have a level 2 autonomy called NIO Pilot, the most advanced ADAS for a production car, which has a whole range of features that are rolled out via over-the-air updates, and we have just brought out our new updated, improved interface.

The cars also use an all-aluminium chassis and the ES6 uses some carbon fibre too to help compensate for the weight of the battery.

How do customers charge their cars?

We want NIO to not only be about great vehicles but about great service, too. In China we currently have a world-first battery swapping scheme where you can drive into a small area which takes up the space of three parking bays, and a robotic arm will swap your battery over for a fully charged one in three minutes, so you can get on with your day. We have 125 of these electric battery swap stations. We also have One Click For Power which is an app where you can call a mobile charging van to you in 15 minutes, which carries two large batteries on board and can charge up your vehicle to 100km range (62 miles) within 15 minutes. Over 80 per cent of our users have home chargers though so these are just extra ways we can reduce range anxiety and encourage people to take on an EV.

Tell us about your smartphone app?

The NIO app has more than 800,000 users in China and it is where our community lives and interacts with each other. People use it to chat to a designated ‘fellow’ who is assigned to you to deal with any issues you may have. We also have a forum where experiences are discussed, the good and the bad! We have also developed the NIO House which we call a living space for our customers and their friends. It is our vision of a car dealership with a gallery to explore NIO’s products, but also provides users with experiences that go beyond the car. So for example, you have access an exclusive member’s area which it is divided into seven zones that include a Lab (bookable meeting rooms and workspace), Joy Camp (a space for children), Open Kitchen (a space to enjoy cooking classes and NIO’s signature coffee), and a Forum (space to organise a private party). The NIO House also hosts special events and activities that users can attend, from yoga classes to lectures with special guests.

Your EP9 is one of the fastest electric cars in the world, has it broken any lap records?

The EP9 set the lap record at the Nürburgring in 2017 (06:45.900), it also has a fully autonomous mode and it set a new world record for the fastest self-driving car at Circuit of the Americas in Austin, Texas, (02:40.33) reaching a top speed of 160mph. The car is for sale but in limited numbers and is for track only. With four high-performance inboard motors and four individual gearboxes, the EP9 delivers 1-MegaWatt of power, equivalent to 1360PS (1342bhp). It accelerates from 0-124 mph in 7.1 seconds and has a top speed of 194 miles per hour. With an interchangeable battery system, the EP9 is designed to be charged in 45 minutes and has a range of 265 miles. 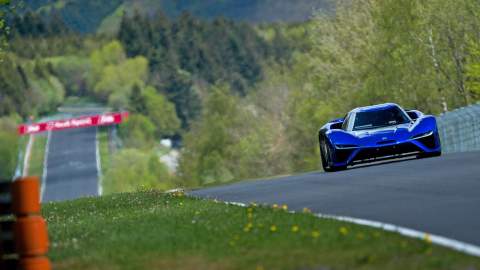 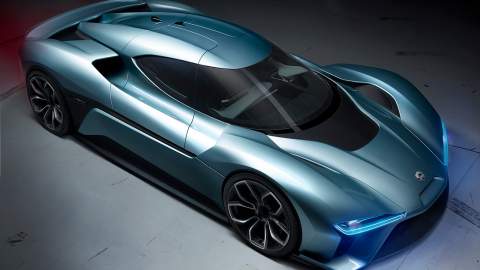 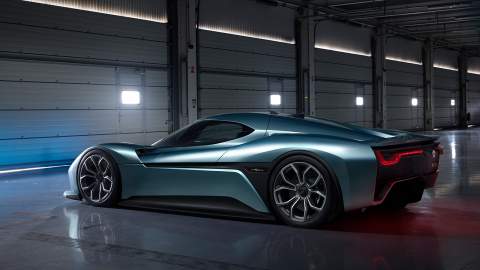 Do you only sell in China?

For the moment, yes. Remember, we aren’t even five years old yet but to put in the R&D and build a factory in a year, to bring a car from paper to market and create the servicing infrastructure that we have, is good going! Our intention is to sell our cars outside of China but we don’t have any dates yet, hopefully within a few years.

We feel that, in China at least, the new tech and whole experience will attract people to our EVs more. China has also been good for setting out testing space for autonomous cars and implementing the infrastructure.

NIO has recently been hit by the departure of one of its founders after financial pressures led the company to cut its workforce by 10 per cent. How are you intending to rebuild peoples trust?

I feel that we’ve had a clear vision and done what we said we would do, from having top talent and automotive businesses to work alongside us, to building a record-smashing supercar and putting SUVs on the market. Establishing a smart EV start-up hasn’t really been done before, so we’ve had to find our own path in this new industry, which has been especially challenging.

Growth has slowed this year as the government cut subsidies for purchases, which is good in a way as they wanted to keep the production high quality, but this obviously has an impact in sales. Also the trade tensions between China and the USA have impacted Chinese users in terms of their spending. This is all to do with the slowing of the market though rather than with NIO, so I don’t feel as though we have lost our way.

What can we look forward to from NIO?

The market is extremely challenging but our latest sales figures have demonstrated that we have enjoyed stronger results in the last quarter. The smaller ES6 is now available and both vehicles can access the 84kWh battery to extend range. We are also making it easier for us to interact with consumers by opening 200 NIO Spaces in 100 cities by the end of the year. NIO Spaces will allow us to quickly increase the number of sale points in the market. Alongside this, we are also looking at subscription programmes and corporate and fleet markets.