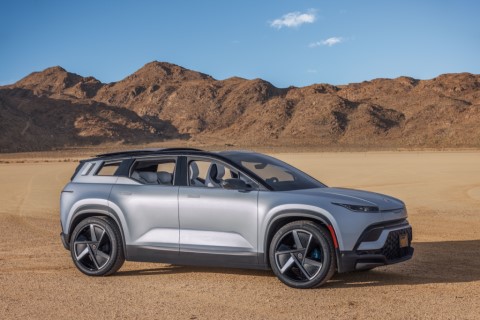 Re-emerging from its failed petrol-electric Karma, US car maker, Fisker, seems to have created a far more viable product in the form of the Ocean. The all-electric SUV has now been shown in Europe for the first time at Mobile World Congress in Barcelona, and with European deliveries starting this year, it’s an interesting proposition.

The brand’s CEO and namesake, Henrik Fisker, presented the car at Mobile World Congress himself, citing the event’s focus on the latest tech as aligning with the car’s desired attributes. Development of the Fisker Ocean has been going on since late 2019 with the Ocean having been presented at the Consumer Electronics Show back in early 2020.

According to Henrik Fisker: “With the Fisker Ocean's combination of performance, value and sustainability, I believe we have a unique electric vehicle with industry-first features, such as California Mode, a 17.1-inch rotating screen and the longest range in our segment.”

If you are wondering what California mode is, it drops the windows and retracts the large panoramic roof to provide as close to open air driving as you can get in a hard top. That 17.1 inch touchscreen also seeks to provide the best of both landscape and portrait modes with the ability to rotate it when the car is stopped from ‘Control mode’ (portrait) to ‘Hollywood mode’ (landscape).

Other competitive differences that Fisker hopes will set the Ocean apart from rivals such as the BMW iX3 and Audi Q4 e-tron include a big focus on sustainability. Interior materials are made from recycled plastics, whilst the brand reckons the solar roof can offer up to 1000 free miles per year. Fisker has proudly stated that its ambition is for the Ocean to be the most sustainable car across its production to disposal lifecycle.

In terms of spec, Fisker is going to be building three trim levels. At the bottom end of the spec in the UK is the Fisker Ocean Sport, which will start at £34,990. This will come with a range of up to 275 miles and will be front-wheel drive – powered by a 275bhp motor. Fisker hasn’t provided battery sizes but back at CES it mooted an 80kWh unit from CATL with 150kW charging. It has been reported that Fisker is still honing the final specs when it comes to maximum charging speeds.

The Ultra specification adds a motor on the rear axle to bring power up to around 540bhp and gets a larger battery (size unknown) to make it the longest-range Ocean on offer, capable of up to 390 miles. This will start at £48,900. Finally, the Extreme spec car gains more power still at around 550bhp, and starts at £59,900. Add another £90 onto that figure and eager customers can reserve the limited-edition ‘One’ spec car, which will be limited to 5000 units and will be based on the Extreme spec car.

To give some credibility to the car’s likelihood of reaching customers, Fisker is currently assembling 47 prototypes and has Magna Steyr in Austria on board to undertake production for the European market. It’ll be focussing on customer experience and is going to offer a basic six-year warranty or 100,000km (62,000 miles), and a powertrain and battery warranty of ten years and 160,000km (100,000 miles).

As we reported previously, the brand will be opening an experience centre in Munich and is hoping to follow this up with additional centres in other countries. Whilst deliveries for some European markets could start as early as early 2023, it’s not due in the UK until the second quarter of the year.

Fisker Ocean squares up to Tesla Cybertruck with off-road...

Fisker Ocean squares up to Tesla Cybertruck with off-road...