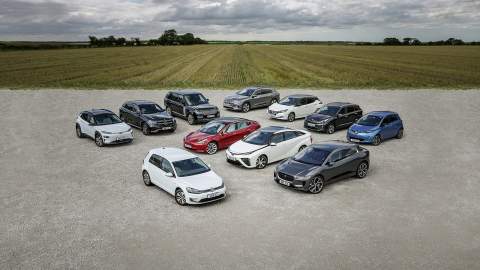 Has it ever occurred to you that people (us included) refer to electric cars specifically by the fact they are powered by electricity?

Electric cars are not just “cars” in the common vernacular. A car is powered by liquid fossil fuels and has an internal combustion engine. And that's not just us saying so; the dictionary classifies a car as being “...typically powered by an internal combustion engine”, which has caused Jaguar to push for a revision given that without it, its I-PACE doesn't really qualify for the World 'Car' of the Year title bestowed upon it.

Pedantic it may be, but moving from the current situation where EVs are curios to a point where they're just cars – like any other car – is critical in the normalisation of the technology. However, we will get there according to consumer research undertaken by joint government and industry campaign body, Go Ultra Low.

When asked what would increase their chances of buying an electric car, 45 per cent of respondents cited improved charging facilities. This demonstrates that more needs to be done to educate people as to the sheer extent of the UK's charging network, even in its current form. According to Zap-Map statistics, at the time of writing 368 charging points went online in the last 30 days alone.

Misconceptions around the range of EVs on offer in the UK were also a factor, with a quarter of people saying a wider choice would increase their propensity to purchase. The survey found that on average, people reckoned there were just 15 different models available. Again, the sheer choice available needs greater promotion as there are actually 24 fully-electric and 27 PHEV models available – numbers which are growing weekly.

Go Ultra Low has recently employed the services of celebrity adventurer, Ben Fogle, as a new brand ambassador who will bring the campaign's message to a wider group of people. He said; “It’s really encouraging to see that people expect EVs to be the norm in just over a decade. Our research shows that as we become more aware of the benefits of owning an electric car, the choice of models available and the rapidly growing charging infrastructure, people are more likely to consider going green and buy an EV.”

There's still an awful lot of work to do from all sides, though. The government has a huge role to play and, it could be argued, simply hasn't got a firm enough grasp of the rapidly changing technology and range of options being developed by the industry. Vehicle manufacturers need to be proactive at a dealership level which, through various experiences of Discover EV contributors (and readers), we know is where the problem lies. Charging network providers also need to get their act together to make it easier for people to use their chargers instead of dealing with myriad subscriptions and apps rather than getting out their debit card and paying for the service like they would for petrol.

Poppy Welch, Head of Go Ultra Low, is confident that they can make progress, however: “As we welcome Ben as our ambassador and a host of new members to the campaign – bringing together government and key players across the EV industry – we’re now better placed than ever to tell the full story of electric car ownership.”

When thinking about the adoption of EVs and normalising them to a point where they are just “cars” we can draw comparisons with all manner of other technologies. Mobile phones are an obvious one; bulky, crude and not much good when first developed, they have been developed to a point where we no longer even consider smartphones as “smartphones” – they're just phones. And they're also a standard part of everyday life. EVs will get there – probably more quickly than most mass-adoption technology – but there's still work to do.