Since it was relaunched in 2007 the Fiat 500 has proven itself wildly popular all over the world, selling by the bucket load to a predominantly younger, style-conscious audience. Now, Fiat Chrysler Automobiles (FCA) is playing EV catch-up and is entering the electric playing field with an all-new version of the 500. Emulating the success of the 2007 car isn't guaranteed, however, especially given the new 500's price tag.

Fiat has lifted the covers on a car that was a very poorly kept secret in the automotive world. We've known for some time that the all-new Fiat 500 was going to be launched in EV-only form; we have just had to wait until now for it to be confirmed by FCA itself.

The all-new Fiat 500 is FCA's first all-electric car, but perhaps more interestingly from a wider standpoint it is the first fully-electric, four-seater convertible to go on sale – anywhere. As expected, Fiat has increased the size of the 500 and taken it somewhat up-market with a new level of connectivity, autonomy and quality of materials. However, it has retained the cheeky, retro styling that has seen the current car become such a hit, but with details that clearly mark it out as a zero-emissions car.

There is one detail that could make it a struggle for Fiat to re-capture that mass-market appeal; the new Fiat 500 in high-spec, launch guise is priced at £29,500 for the convertible and £26,995 for the hatchback after the plug-in car grant is applied. And you can now buy one with order books having opened at the end of last week, but let's take a look at what you'll be getting for all that cash.

According to Fiat, the designers and engineers of the new 500 started with a blank sheet of paper, and whilst the body styling might ape what has gone before, the powertrain is entirely new. Knowing that range and charging time are two of the most important aspects of an EV for potential customers, Fiat started here.

Its solution to the former is a 42kWh battery which gives the new 500 a range of 199 miles on the WLTP cycle. This is six fewer miles than rivals such as the Vauxhall Corsa-e and Peugeot e-208, but significantly more than the 145 miles of the MINI E (which we love – read our review) and 125 miles of the Honda e.

The solution to the latter issue of charging is dealt with through an 85kW fast charge system which means drivers can add 30 miles in five minutes or gain 80 per cent charge if you leave it plugged in for another half an hour. Through a Combo 2 socket, which is located at the rear right side panel of the car, both AC and DC charging is catered for, though we would assume that the charging port would be moved to the opposite side for UK-spec cars. Home charging has been thought about, and launch edition buyers will come with an Easy Wallbox offering a simple Bluetooth-controlled plug-and-charge solution delivering up to 3kW.

Via an optional upgrade, the Easy Wallbox can be upgraded to 7.4kW which will enable a full charge in just over six hours. AC public chargers at up to 11kW are dealt with via a supplied Mode 3 cable.

Unlike rival cars, Fiat hasn't endowed the new 500 with a significant slug of power and in fact is relatively conservative, delivering just 116bhp to the front wheels. It still performs well enough for a city car, with the all-important 0-31mph taking 3.1 seconds. Double that speed takes nine seconds and it tops out at 93mph. One-pedal driving is possible thanks to adjustable regenerative braking, and the 500 has three driving modes: Normal, Range, and Sherpa – where speed is limited to 50mph and power delivery is curtailed to eek the most from the available juice.

Styling, design and the launch edition

Let's face it, Fiat was never going to stray too far from a winning formula in the looks department. Over the 63 years since the first car was released it has maintained a very recognisable face and overall shape. Of the 2007-present cars alone, Fiat has flogged well over two million worldwide.

The all-new 500 is slightly bigger at 6cm longer, 6cm wider and with a 2cm increase in wheelbase. Body shape is basically an accentuated and modernised version of the current car, with the front-end having the tell-tale sign of its EV underpinnings thanks to a blocked-off grille. A high detail line cuts through the (round LED) headlights and runs the length of the car, showing off the higher waistline. Larger wheels, at up to 17 inches, make the car more purposeful from the side-on, as do the body-flush door handles.

Inside, the car is also completely new and has a variety of throwbacks to the 500s that have come before. It's far simpler than previous iterations, however, with fewer buttons thanks to the inclusion of a touchscreen interface and intelligent use of the additional space afforded by the electric drive to provide more cabin storage. The main luggage bay remains the same as the current car, at 182 litres with the seats up and 550 litres with them folded.

Perhaps the most conspicuous styling feature is the way the outside is brought in thanks to that optional roll-top, convertible roof. Whilst not necessarily a 'true' convertible, the ability to let infinite headroom into the new 500 makes it the first four-seater EV convertible to go on sale.

At launch the Fiat 500 will be made available in the UK in top-spec “La Prima” edition, which gives us a good idea of what future top-spec cars will come with. This means full LED headlights, eco-leather, 17 inch diamond-cut wheels and chrome plated inserts on the windows and side panels. For the first 500 cars sold, a monogram soft top and numbered plaque will be included.

A new Uconnect5 infotainment system comprises a 7 inch TFT display, 10.25 inch touchscreen navigation and multi-function interface. Apple CarPlay and Android Auto is supported, and further smartphone connectivity comes in the form of a mobile remote and cabin pre-conditioner, Wi-Fi and a car monitoring assistant including theft tracking and a breakdown assistant.

By way of driver aids, the Fiat ADAS system provides level 2 autonomy through emergency braking, intelligent speed assist and lane control as well as adaptive cruise with lane centering. A rear-view camera is standard on the La Prima, as is auto high and low beams and rescue/emergency call. Topping off the deal is the Easy Wallbox home charging solution.

Updated 26.10.20: Fiat has now confirmed the specifications of the rest of the new fully-electric 500 range and the big news is that the base-spec car comes in at under £20k after the PiCG. In total there will be three spec levels with two different powertrains, although only the lowliest 'Action' spec car gets the lesser power and battery combination.

The Fiat 500 Action comes with a 94bhp motor, enabling 0-62mph in 9.5 seconds and a limited top speed of 84mph. It also gets a tiny battery of just 23.8kWh. Designed for the city, in urban areas it can crack 150 miles, though the WLTP cycle has it down to 115 miles. Charging can be undertaken at up to 50kW, making a full charge a sub-30 minute affair. With 'smart audio' turning a smartphone into the infotainment, 15 inch wheels, halogen headlights, rear parking sensors and a 7 inch TFT driver's display, it's a snip at £19,995 but can only be bought as a hatch.

Up from the Action is the 500 Passion. This gets the uprated powertrain as seen in the La Prima-spec car, meaning 199 miles on the WLTP cycle and up to 285 miles in the city. It gets LED daytime running lights and debuts FCA's new infotainment system with a 7 inch touchscreen, wireless Apple CarPlay and Android Auto plus a DAB radio. It also gets new voice recognition, activated with “Hey Fiat”. Some additional styling touches combine with cruise and climate control to add a bit more luxury to the 500. In Passion spec, it'll cost £23,495 for the hatch and £26,145 for the drop-top.

Finally, the 500 Icon spec car sits below the La Prima in terms of both equipment and price. It gets a larger 10.25 inch 'cinerama' touchscreen with integrated GPS and the new infotainment system. On the outside it gets larger 16 inch wheels, passive, hands-free access which is a first on an A-segment car, as well as the new black, button-free 'pebble' – a smart key which is wearable or can be subtly carried, activating the car as you walk up to it or deactivating it as you walk away. The interior gets some additional design touches including natural wood effect and vegan leather. It costs £24,995 in hatch form, or £27,645 as a cabriolet.

Up until now, the new Fiat 500 looks like a pretty good contender as a new entry into the electric city car market. It's desirable from pretty much every perspective, with its major selling point being those retro-cool looks and legions of fans who will simply want the new one!

The stumbling block is that price tag of £29.5k for the launch edition in convertible form, or a fiver under £27k for the hatchback (including PiCG). Of course, down the line when lower-spec cars come out, that figure will drop but let's be realistic here, it's not going to go for much less than £25k in poverty spec, and that's a fair wedge of money. Other cars get much better kit for a grand shy of £30k, as well as more space and the provenance of having been made by manufacturers well into their first generation, or even onto their second generation EVs.

Naturally the all-new 500 will fly out of showrooms regardless of the inflated sticker price, but then again so will the MINI E. Undercutting the 500 by almost £5k and cut from very similar retro cloth, on paper it looks like the better option. Another detail we should mention is that Fiat will, eventually, launch the new 500 with internal combustion power, which we can't but help think is a backward step.

It's now possible to reserve a new Fiat 500e Convertible or Hatchback in La Prima launch spec with zero deposit. Deliveries are due to start in late 2020 or early 2021. Simply go to www.fiat.co.uk.

We'll reserve final judgement until we drive it!

Fiat has released a documentary about the development of the new 500e, and it's well worth a watch if you have 15 minutes spare. Check it out below. 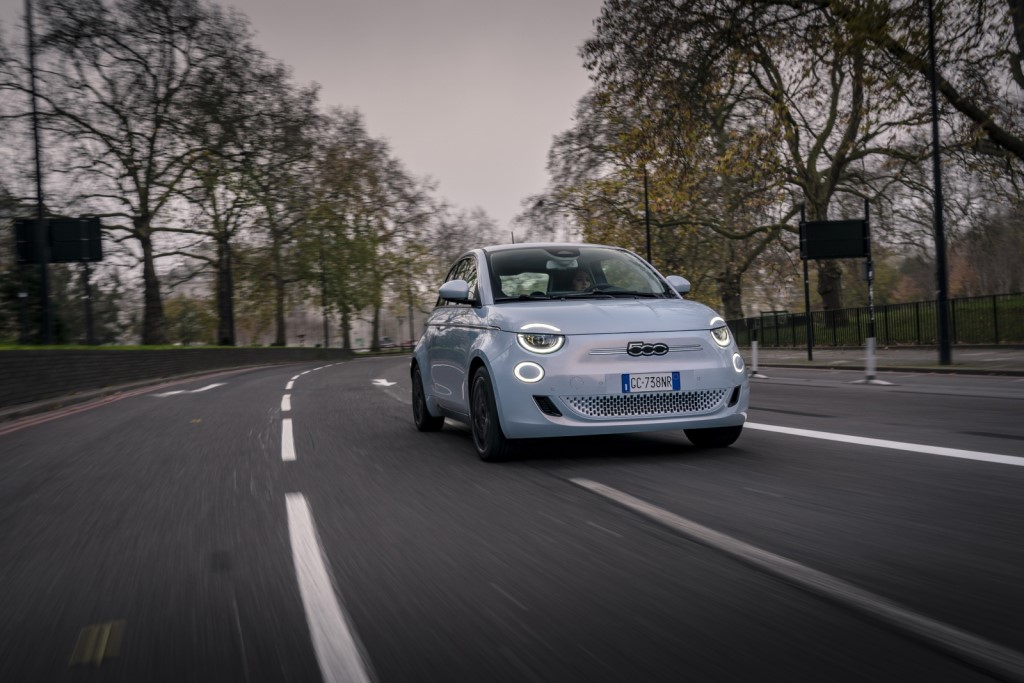 All Fiats will be electrified as of July