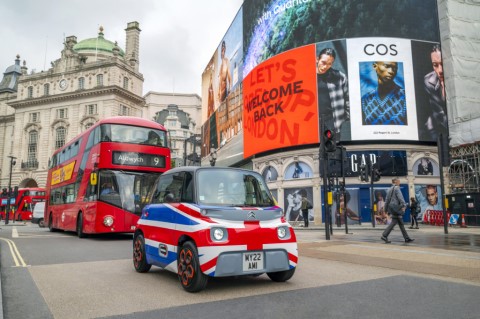 Top 10 EVs for the city streets

EVs make an awful lot of sense in urban environments. Zero tailpipe emissions make them clean and bundles of torque make them quick off the mark, whilst the lower speeds mean more miles per charge. With the recent introduction of an extended ULEZ in London, and other cities looking to implement similar schemes, they make more sense than ever. But what EVs should you be looking at for city driving? Here, we list our top 10.

A familiar car with familiar controls and a peppy little electric powertrain, the e-up! To drive, it shares many of the attributes that make the petrol-powered cars nice things to steer. Don’t be expecting fireworks when you put your foot down: with an 81bhp motor, 62mph comes up in 11.9 seconds and the top speed is 81mph. The 36.8kWh battery gives a very useful range of 159 miles and takes an hour to charge. It’ll seat four adults in relative comfort and comes with a decent array of standard kit. Yes, the infotainment is fairly awful and the people in the back won’t want to be there for too long, but it’s a comparatively grown up EV and at just 3.6m long by 1.65m wide, a natural city dweller. Read our review. 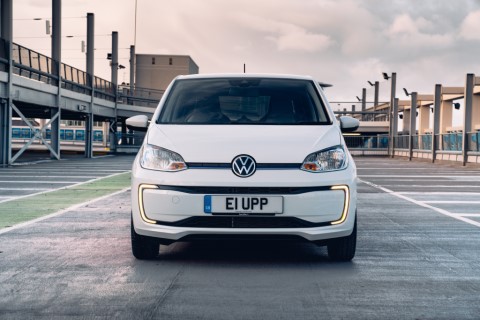 The new 500 is a great choice for anyone looking for a little bit of urban style. It is available with a range of powertrains from a 23.8kWh, 94bhp version with 150 urban miles available, to a 42kWh version with well over 200 in the tank. It can be charged in less than 30 minutes and has space for four, with a thoroughly practical 182 litre boot as well. Low-spec cars are very basic, but then again they start at just over £20k. Move up the range and you’ll get a 10.25 inch touchscreen, on-board Wi-Fi, connectivity and even Level 2 autonomous driving. Read more here. 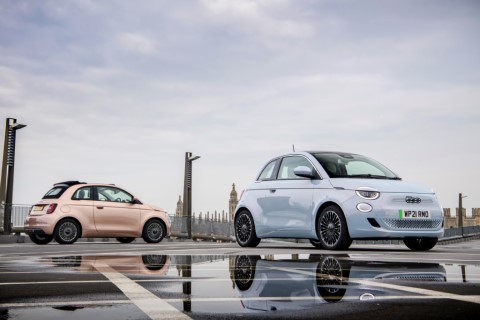 The MINI Electric is a properly fun, quick and funky little EV. Throughout the range all cars come with a touchscreen featuring navigation and smartphone connectivity, digital cockpit, cruise control and dual zone AC. The ace up the MINI Electric’s sleeve is the 184bhp, 199lb-ft motor which makes the MINI a proper little hot hatch, capable of 0-62 in 7.2 seconds. A sporty, direct chassis adds to the fun. Thanks to a 35kWh battery, range is 145 miles on the official cycle and charging takes less than 40 minutes and will carry four people just like any other MINI. It’s nicely built as well. Read our review. 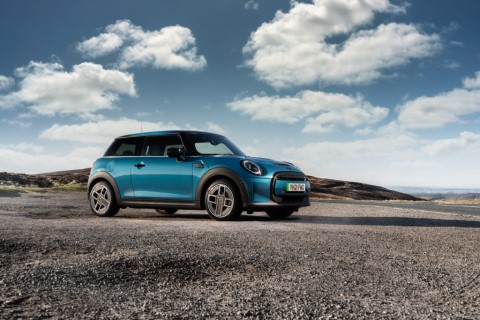 The Renault Twizy was ahead of its time, having been launched way back in 2012 long before we were talking about the likes of the Citroën AMI (see below). The Twizy was the biggest selling plug-in car in 2012 – shifting 9015 units, which is a laughably small number now and shows how far we’ve come in accepting EVs. The Twizy seats the driver sitting ahead of a single passenger. Doors and weather protection are optional and there’s no advanced connectivity to speak of. However, the Twizy is a proper little commuter from out-of-town, capable of 50mph and 62 miles on a charge (which takes 3.5 hours on a three-pin). 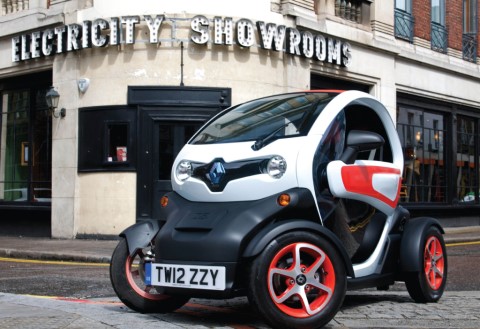 Citroën’s AMI is heading to the UK in 2022 and is among the first of a new generation of tiny EVs dedicated specifically to city travel. At 2.41m long and 1.39m high its small footprint makes it perfect for zipping around town with two aboard. The 5.5kWh battery enables it to travel 43 miles at up to 28mph and takes less than two hours to charge, even from a regular three-pin socket. We drove it in Coventry and despite feeling a little vulnerable on roads that exceeded the 30mph limit we reckon it could be a cheap, utilitarian way of making clean urban motoring affordable to the masses. 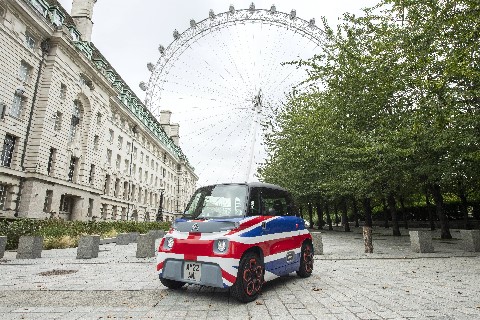 smart was one of the first brands to get rid of internal combustion from its range cars. Both now share a powertrain comprising a 17.6kWh battery and an 82bhp motor. Performance and range are far from breath-taking, with the diminutive cars able to hit 60mph in 12.7 seconds and reach almost 81mph. You’re going to run out of range on the sad side of 100km (62miles). They’re not the best equipped or most practical, but as cars to run around locally or just pop to and from the shops in zero emissions silence, either is a good choice. All you need to do is work out whether you need space for two additional people in the back. Read our review of the forfour here. 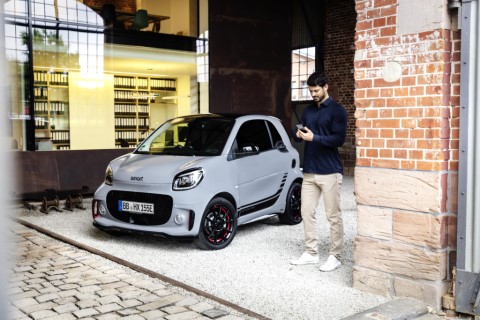 BMW’s compact but versatile EV has been around for the best part of a decade but it’s still up there with the best for city driving. It’s fun to drive and has a decent turn of pace when you want it, hitting 62mph in just 6.9 seconds. Inside, it has been refined over the years and makes for a nice, tech-laden place to be with all the connectivity and style features you’d expect from a premium brand. The 42.2kWh is worth 188 miles officially and can charge in less than an hour. The biggest thing going against the i3 is the price of nearly £34k, but if you can afford it, you probably won’t be disappointed. Read our review. 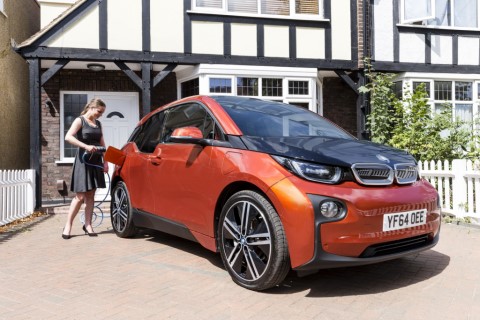 Renault’s second entrant on this list is a more conventional choice than the Twizy. The ZOE could easily be a family’s sole car, offering a lot of bang for your buck. With a 245 mile range, delivered thanks to a 52kW battery and highly efficient powertrain, it comfortably trumps all of the other cars in this list. Even in base ‘Play’ spec, the ZOE gets a 10 inch driver’s display, a 7 inch infotainment screen, but up the budget and you’ll get an array of connectivity and driving aids. Check out our verdict of the Renault ZOE. 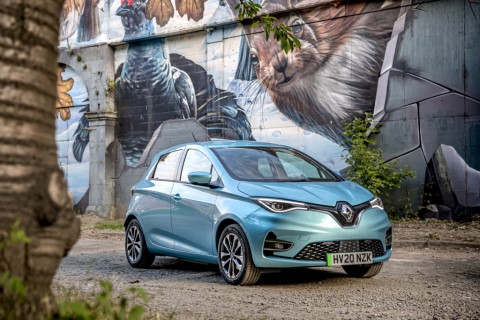 Vauxhall’s inaugural EV is what we labelled ‘an electric car without the flashiness’. It has decent range al 209 miles, good levels of technology as well as familiarity and ease of use that makes it a great car for first-time EV buyers. It’s a Corsa, after all. The 134bhp motor and 50kWh battery combo is tried and tested and at 100kW DC, charging takes just 30 minutes. Even on the base-spec car there’s a good level of kit including mobile connectivity and a 7 inch touchscreen interface. See what we thought of it. And if you’d like effectively the same car with a Peugeot badge, the e-208 is the car for you! 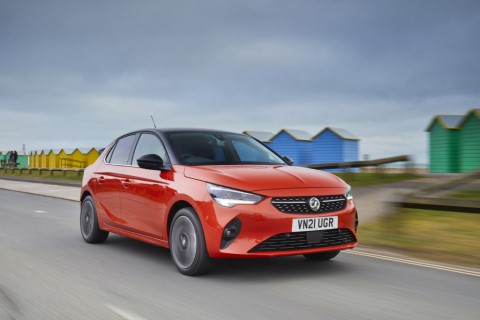 Honda’s first mass market EV is a good one. Distinctive styling puts it up there with the MINI and Fiat 500. It’s also fun to drive thanks to 50:50 weight distribution and a 151bhp, 232lb-ft motor, alongside a go-kart-like chassis. Where the Honda e comes into its own is its multiple advanced technologies. The full-width digital dashboard includes five screens, and comprehensive safety features put the Honda e right up there with the best on this list. A small 35.5kWh battery means a 137 mile range, but this is plenty for day-to-day urban driving. Here’s our review. 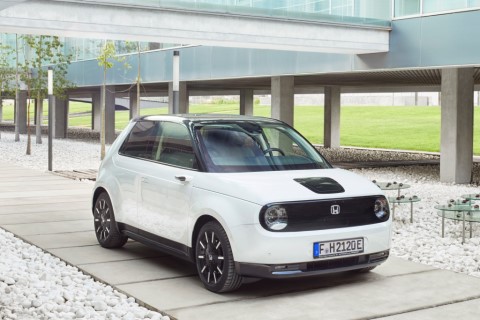