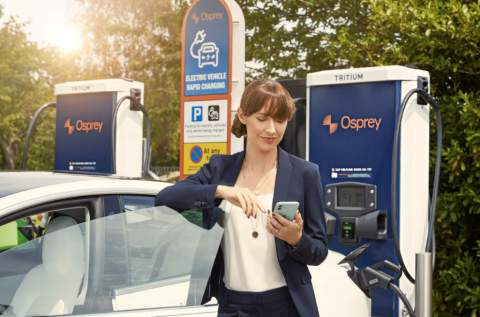 Osprey Charging has partnered with Ediston – a retail major retail property owner – to install charge points at an initial ten out-of-town retail outlet sites. Located across the UK, and supporting some of the country’s biggest shopping brands, the initial roll-out of rapid chargers of up to 75kW is expected to be expanded in due course.

Ediston is a name that you might not have heard of, but it owns a number of warehouse sites across the UK that house shopping brands including Aldi, Costa and The Food Warehouse. In total, the company reckons millions of visits are made to its sites per year.

It has now gone into partnership with Osprey Charging – one of the biggest and fastest growing charging networks in the country which also happens to rank amongst the best for user experience – to add ultra-fast charge points to its portfolio of sites across the UK.

An initial roll-out will see ten sites equipped with up to six of Osprey’s ‘Tritium’ chargers which balance available power to maximise the charge speed for each car that is plugged in. These can deliver power at up to 75kW whilst also minimising waiting time and in ideal conditions, could charge an average EV from empty to full in around 45 minutes. To put that into perspective, that’s a drink-in Costa followed by a gentle peruse around Aldi.

The first site to gain these new ultra-rapid chargers is Haddington Retail Park in East Lothian, with the installation currently in progress. Further sites will get their chargers during the year with even more sites set to benefit as Ediston acquires or builds new retail sites.

Graham Lind, Head of Retail Warehouse Asset Management at Ediston, said: “With EV registrations increasing year-on-year, we’re fast approaching a new era of electric transport. On-site EV charging at retail parks will soon become an essential offering and customers will expect to be able to charge their vehicles wherever they shop and our tenants will expect us to provide the infrastructure which enables them to do so.”

More EVs were registered in 2021 than in the previous five years combined, as Graham Lind hints at in his statement above. This is obviously fantastic news for the environment and for the decarbonisation of personal transport, but the availability and quality public infrastructure is a concern for many.

The availability of infrastructure is variable depending on where you are in the country with some cities better equipped than others. There are now over 49,000 points at which an EV can be connected to charge in public across the UK (according to Zap-Map at the time of writing) and this is growing quickly. There are an estimated 400,000 EVs and 750,000 PHEVs on UK roads according to the SMMT, meaning that there’s a massive gulf between available charge points and the number of cars that can be plugged in.

There is a bigger gulf between the number of petrol or diesel cars and the number of fuel pumps, but clearly fuelling up takes less time than charging.

Of course, most people charge at home most of the time, but with an increasing number of people who have no off-street parking wanting to buy an EV, the discrepancy is stark. Rapid charging with a high turnover rate, like that being provided by Osprey, is going to be critical in plugging the gap that currently exists.