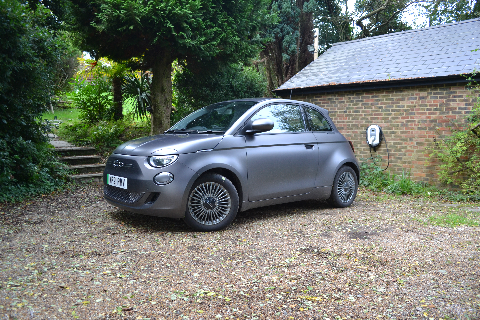 For the second time in just nine months the government has slashed the Plug-in Car Grant (PiCG), and it is now only available for models costing up to £32,000 down from £35,000 previously. Having been cut by 40 per cent to £1500 – down from £2500, industry insiders have accused the government of sending mixed messages on electric vehicles.

It’s a move that won’t prove popular with prospective buyers either, with drivers already experiencing record-high prices for fuel and second-hand cars, some of which rose by 30 per cent during 2021. Added to spiralling energy bills, rising food prices and yet more financial hardship for some if additional Omicron restrictions are enforced and the cut to grants could not been timed any worse.

It also comes in the wake of the introduction and expansion of emission taxation zones in Birmingham and London respectively, in a bid for drivers to replace their older petrol and diesel cars with lower or zero emission vehicles. For those driving into the capital's Ultra Low Emission Zone, which was expanded 18 times in size in October, the daily rate is £12.50.

With manufacturers given no forewarning, it means some of their battery models are priced out with immediate effect. Previously, some 27 cars were eligible for the scheme but the new price cap means just 17 electric cars currently on sale in Britain now qualify. While the PiCG is available to vehicles with CO2 emissions of less than 50g/km that can travel at least 70 miles on zero-emission power meaning a plug-in hybrid could technically qualify for the grant, no such PHEV model meets these criteria, so for now it’s exclusively available to 100 per cent electric cars. To see the full list go to gov.uk/plug-in-car-van-grants.

The Plug-in Van Grant has also been cut to a maximum of £2500 for small vans (2.5 tonnes gross vehicle weight) and £5000 for large vans (2.5t-3.5t GVW) and each business, organisation or individual may receive up to 1000 PiVG each financial year.

The DfT said the changes will allow 'the scheme's funding to go further and to help more people make the switch to an EV' and, despite the cuts, the ‘government's total investment in the transition to electric cars remains unchanged'.

In a statement released on December 15, Transport Minister Trudy Harrison said: “The market is charging ahead in the switch to electric vehicles. This, together with the increasing choice of new vehicles and growing demand from customers, means that we are re-focusing our vehicle grants on the more affordable vehicles and reducing grant rates to allow more people to benefit, and enable taxpayers' money to go further.”

Mike Hawes, SMMT Chief Executive, said: “Slashing the grants for electric vehicles once again is a blow to customers looking to make the switch and couldn’t come at a worse time, with inflation at a ten-year high and pandemic-related economic uncertainty looming large.

“Industry and government ambition for decarbonised road transport is high, and manufacturers are delivering ever more products with ever better performance. But we need to move the market even faster – from one in a hundred cars on the road being electric, to potentially one in three in just eight years – which means we should be doubling down on incentives. Other global markets are already doing so whereas we are cutting, expecting the industry to subsidise the transition, and putting up prices for customers. UK drivers risk being left behind on the transition to zero-emission motoring.”

Paul Willcox, Managing Director, Vauxhall, commented: “The changes provide a confusing message to UK consumers and will harm EV adoption at a time when we need to be doing all we possibly can if we are to stand a chance to move the UK to electrified only vehicles by 2030.

“Whilst we understand the government’s desire to phase out the plug-in vehicle grant at some point, we really need to see a more strategic, longer-term approach.  A lack of clarity and certainty for customers can only harm EV adoption and leave the UK lagging behind other countries in the race to decarbonise personal transport.

“Whilst electric vehicle adoption is growing rapidly at the moment, EVs still represent a small percentage of the overall UK vehicle parc. In our view, further work is needed on other fiscal incentives, such as considering a reduction in VAT for EVs, and also aiming that support at those that financially need it to make the move to EVs.”

Andy Alderson, founder and CEO of online car leasing business Vanarama, said: “The Plug-in Car Grant and Plug-in Van grant have both been major factors in helping people make the decision to move away from older and more polluting technologies to greener and cleaner EVs.

“We all knew grants couldn’t continue forever but to slash them so savagely and with immediate effect just as the industry prepares to hit the EV tipping point in 2022 doesn’t seem sensible at all.

“The government’s own plans to end petrol and diesel sales by 2030, as was talked about so much at the COP26 summit just last month, must now be in serious doubt.”

The government states that ‘its approach to supporting the uptake of electric cars is clearly working – while the grant has slowly reduced over time, the sales of electric vehicles has soared’. Surely record sales in 2021 have been down to the fact that there are more electric cars than ever to choose from and the price gap has been slowly narrowing, not to mention customers’ could still receive a £2500 reduction for cars costing up to £35k.

More notably perhaps is the fact that there is clear evidence that incentives boost sales. Take Norway for example. As well as significant grants, zero road tax, no VAT, reduced company car tax and savings on toll roads and ferries, parking was also free until recently, though charges are still capped at 50 per cent of the maximum. Drivers of zero emission cars can even use bus lanes. EVs accounted for more than 70 per cent of registrations in 2020, enough said.

It seems counterintuitive to set an ambitious target to end petrol and diesel sales yet put in less measures and schemes to aid EV adoption than other European countries who don’t plan on proposing a 100 per cent cut in CO2 emissions for another five years after us.

There is one positive and it seems to be missing from a lot of media coverage and that’s a statement about infrastructure, with the government saying “it will introduce new rules next year that will increase confidence in our EV charging infrastructure. These rules will mandate a minimum payment method – such as contactless payment – for new 7.1 kW and above charge points, including rapids. Motorists will soon be able to compare costs across networks which will be in a recognisable format similar to pence per litre for fuel and there will be new standards to ensure reliable charging for electric vehicle drivers.”

Let’s hope it’s more positive than this most recent move and instils confidence in those looking to make the switch as well as give industry warning and time to prepare. But after Boris Johnson’s bizarre Peppa Pig reference during his address to the Confederation of British Industry (CBI), who knows what will happen!