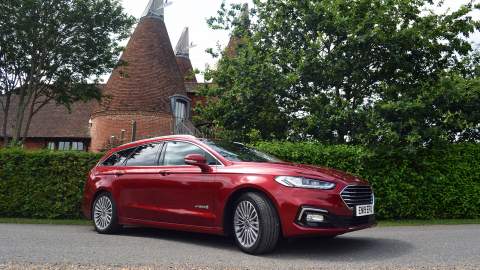 The Ford Mondeo large family estate now comes as a petrol-electric hybrid for the same price as the diesel only equivalent, we find out what it’s like to live with for a week.

As part of a refresh of Ford’s hybrid Mondeo, it introduced an estate in spring 2019. Revealed at the Brussels Motor Show in January, the car maker was quoted as saying that the new model would enable customers who require greater load-carrying capability to benefit from the driving range and freedom of a traditional combustion engine with the efficiency and refinement of an electric powertrain. Introduced in 2014, previously the Mondeo hybrid was only offered as a four-door variant, and the estate’s arrival was intended to strengthen the body style’s 30 per cent share of sales and in fact increase that figure by another 20 per cent.

Fast forward just nine or so months and Ford is making the headlines with its plan to make half of its passenger vehicle sales electrified by 2022 – the year in which the brand expects the tipping point of electrified versus conventional petrol and diesel powertrains. In fact, the company is launching 17 electrified vehicles in Europe by 2024, including eight in 2019, but for now the only eco conscious model available in the UK is the Mondeo hybrid, so we got one in on test for a week to find out what it’s like. 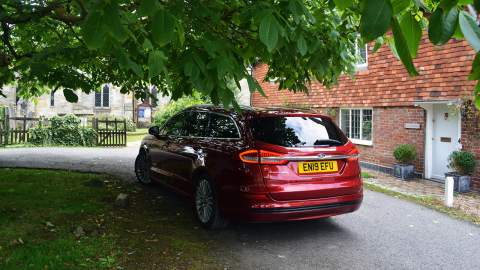 While it is self-charging (that is no electric-only range), the Mondeo Hybrid is capable of pure electric driving when it sets off and when you coast (even at motorway speeds). Ford at the time said it was to eliminate range anxiety and the need for customers to use an external power source to charge the battery, but with electrification fast becoming the mainstream, they are now substantially increasing the number of electrified models and powertrain options for their customers as previously mentioned. Perhaps the older-tech of the 'self-charging' set-up is designed to be the model that comes before the stepping stone (a plug-in hybrid) to electric.

It uses an electric motor to support the specially-developed 2.0-litre Atkinson cycle petrol engine in driving the front wheels, and a generator to enable regenerative charging of the 1.4 kWh lithium-ion air-cooled, recyclable battery. A Ford-developed power-split automatic transmission decides at any given time whether power should come from the engine, the electric motor, both at once or neither. Plus it includes an extra 'L' setting that forces the engine to rev harder and is intended to help control your speed in tricky downhill conditions.

While the hybrid system is pretty much the same as before, Ford say its latest generation of powertrain software is more effective at using the engine’s torque to deliver greater fuel efficiency and performance – seamlessly adjusting transmission ratios to utilise the highest engine torque at lowest engine speed and delivering a linear response to acceleration. And it seems they’re right, car is easier to drive smoothly, and the switch between petrol and electric is, for the most part, seamless.

Going back to the hardware, it simulates the performance of a continuously-variable transmission, rather than a torque-converter or dual-clutch auto, which is probably why throttle response is poor and when at higher rpm there’s the characteristic drone of this type of gearbox. And that’s a shame as its fairly capable handling-wise, turning in nicely and composed through the bends but a comfortable fine cruiser on the straights.  It’s everything you expect from a Ford: predictable and reassuring.  A zero to 62mph time of 9.2 seconds isn’t shabby though for load-lugger of this size, and actually puts it on a par with several other Mondeos, but better than the smaller Toyota Prius or larger Mitsubishi Outlander PHEV. 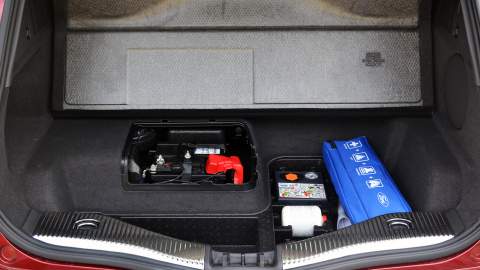 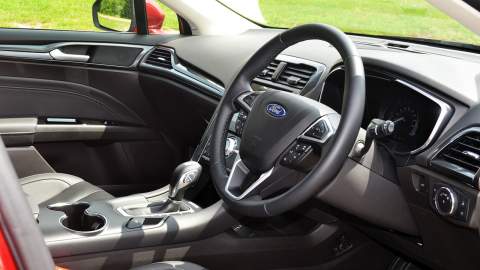 It can drive up to 85mph in electric mode, while the drivetrain delivers 187hp with a combined fuel consumption of 46.3mpg and 113g/km CO2, which is the lowest in the Mondeo range. Covering a wide range of roads over our week with the car, we averaged mpg in the mid to high-forties, which is better than a conventional petrol Mondeo, but on the motorway we suspect the diesel equivalent would use less fuel.

Regenerative braking technology captures up to 90 per cent CO2 emissions and fuel efficiency figures (with the pedal less grabby and more natural than the previous version) while further technologies designed to also help include: 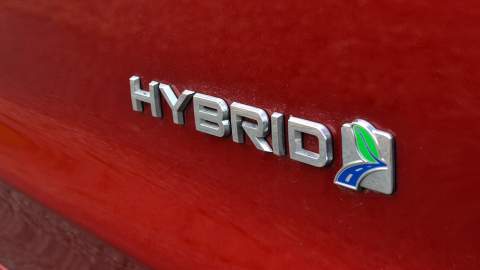 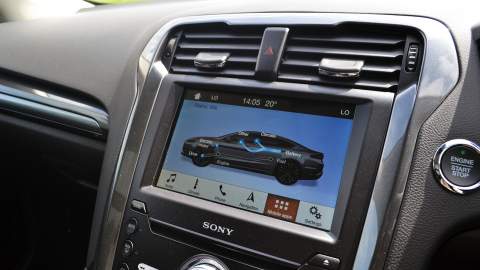 The current Mondeo continues to feature what it calls a lean side-profile, power-dome bonnet and a slim-line headlight design, but the exterior has been freshened up for 2019 and Ford says the cabin is finished to a higher standard, too.

These updates include an enhanced upper trapezoidal grille shape and a revised lower grille design that blends into the new fog-light surrounds (that’s different depending on what three trim levels you have – Titanium, ST-Line and Vignale), together a sporty new bumper fascia with a more pronounced lower lip spoiler. Outback new C-shaped tail lights (that join the revised fog-light and LED daytime running-lights) are intersected by a stylish, full-width strip in satin silver or chrome finish.  The only clue to the petrol-electric tech is the large ‘Hybrid’ lettering on the front doors.

There are also now more options for customers to further personalise their vehicle. Our ‘entry level’ test car for example was spec’d with an Exclusive colour (Ruby Red), rear privacy glass, Bi-LED adaptive headlights (which were very impressive), power tailgate and a panorama sunroof.  All of those options come in at £3295. 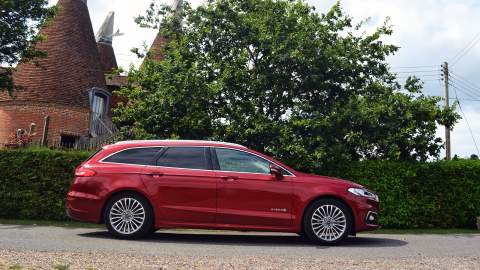 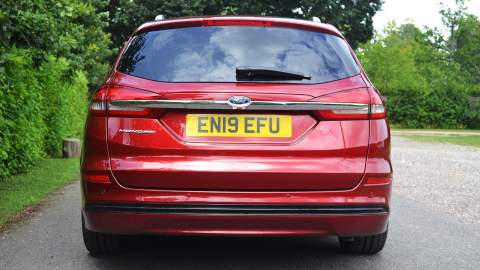 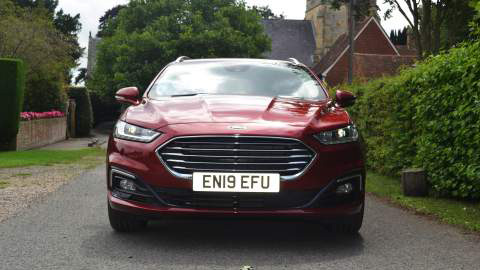 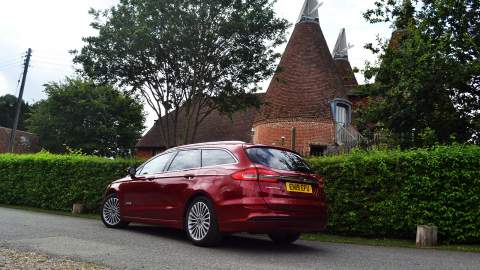 With a battery and electric motor in the boot, the new HEV estate only provides 403 litres load capacity beneath the cargo cover, which is 195 litres less than the Toyota’s new Corolla Touring Sports. That said there’s no compromise to passenger legroom, and with the rear seats folded flat it has up to 1508 litres. What this car is not short of storage space in the form of a decent sized glovebox, various cubby holes and cup holders.

Material quality is higher than one would expect and the general look and feel is smart and uncluttered – but not quite as upmarket as some of the premium German marques. The controls are well laid out and the redesigned instrument cluster has clear TFT screens that replace the car’s analogue dials and Ford’s latest SYNC 3 infotainment system as standard, which has improved over its predecessor with smartphone integration, pinch-to-zoom gestures, 3D mapping and auto correction when typing in locations.

Navigating the touchscreen functions takes a bit of getting used to, and it’s not as quick to respond as other systems, as clear or detailed, but there are permanent shortcut keys in the corners of the 8 inch screen, which is handy. 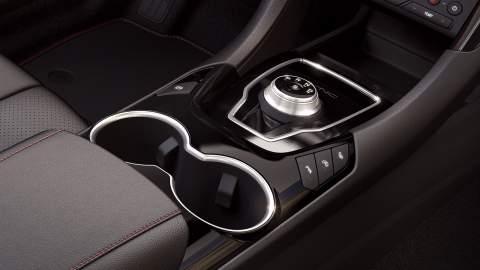 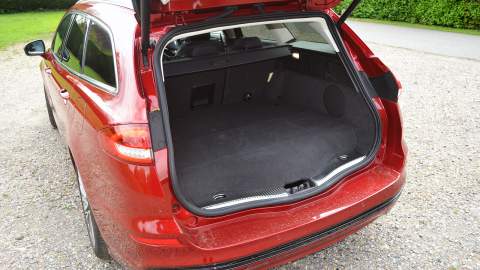 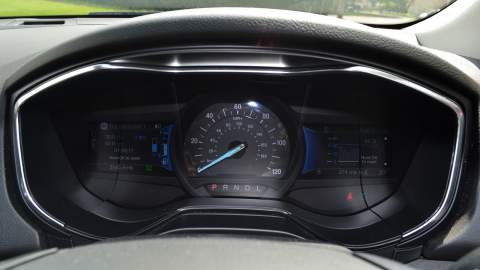 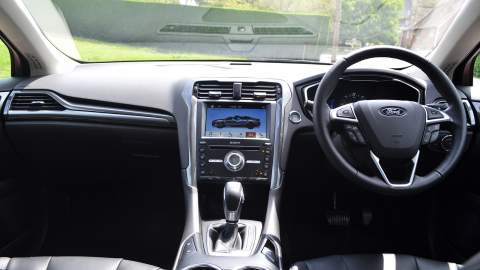 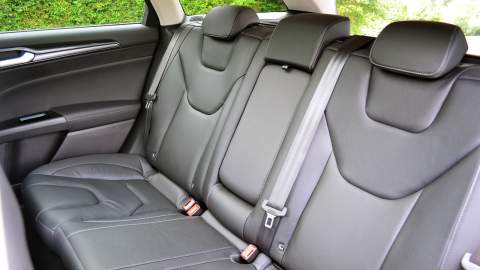 The Ford Mondeo HEV Estate offers tempting BiK rates for company car users (the lowest of any Mondeo) with a green agenda, but if you’re a family looking for other self-charging petrol hybrids you may want to consider the Toyota Corolla Touring Sports, which is cheaper and slightly faster, with a bigger boot and lower CO2 levels (1.8-litre 76g/km; 2.0-litre 90g/km).

Due to those relatively high emissions, the Mondeo Hybrid doesn’t qualify for exemption from the London Congestion Charge either, and while we’re addressing the car’s negatives it’s expensive (even if well-equipped), plus there is no hatchback available. Also at a time when the Mondeo Hybrid's rivals are mostly plug-in hybrids with lower emissions (albeit with a higher price tag), it loses its appeal even more.

The fourth generation Mondeo may not be the UK’s third best-selling car that it was in the mid-nineties but it’s a still a large, comfortable car that can cover huge motorway miles with ease. We will be driving the Volkswagen Passat GTE this week – and while it’s a plug-in hybrid it is an estate that you may want to also weigh up – we’ll let you know what we think when we drive it this week!  It will also be interesting to see what the potentially better packaged although smaller mild-hybrid Focus Estate is like when it arrives. 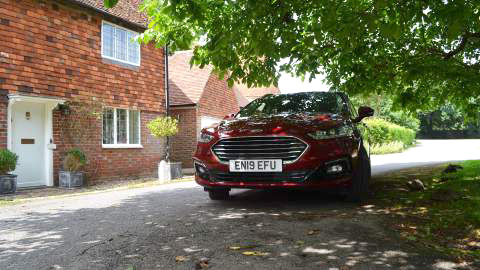