With great range, space and practicality, the Renault ZOE has tons of appeal for an urban runabout

The Renault ZOE is among the smallest of electric cars, but that’s not to say it lacks on range and practicality – quite the opposite. Having already bought us the fun Twizy two-seater and Kangoo ZE van, which is the most successful small electric van in Europe, the ZOE first appeared in UK showrooms a few years later in June 2013.

Although it has been developed on the platform used by the fourth generation Clio and shares the same battery tech as the Nissan LEAF, Renault says the ZOE is designed from the ground up as an electric vehicle (unlike its Fluence ZE all-electric family saloon) with 60 new patents. The model was updated at the end of 2016 with a facelift, new top-level trim, improved range and much bigger battery.

The ZOE is fun to drive around town, but the brakes are grabby as they try to produce energy to recharge the battery, which makes it difficult to slow down smoothly and in stop-start traffic. There are two electric motors available – rated at 87bhp and 107bhp and referred to as the Q90 and R110 respectively.

At low speeds there’s not much to notice in performance between them, but above 40mph the Q90's acceleration quickly starts to tail off, whereas the R110 will get you up to 70mph noticeably more swiftly. While it has a top speed of 84mph ZOE drivers shouldn’t really try to keep up with the flow of the outside lane, likewise on particularly steep gradients the lack of performance becomes apparent and the range starts to drain quickly.

The ZOE’s batteries make it 400kg heavier than a Clio, which results in more body roll through the corners. That said, ride comfort is well composed, steering is light and precise and with a short wheelbase and low centre of gravity (due to the batteries being floor mounted) it turns well. It becomes a little unsettled over rough surfaces on faster roads as the suspension errs on the firm side and overall lacks the fun drive of a traditional supermini, but it’s perfect for the school run, weekly shop or commute to work. Renault provides two ranges: 174 miles in the summer and 112 miles in the winter for the Q90, while for the powerful R110 with the newer 41kW battery, those numbers increase to 186 miles and 124 miles respectively (WLTP). A full recharge is estimated by Peugeot to cost around £3.

Charging the ZOE from empty takes seven to eight hours if you plug it into your 7kW charger at home, or two hours and 40 minutes from a 22kW charging point. For £750 there is a Quick Charge upgrade that allows the battery to be topped up to 80 per cent from empty in 65 minutes from a high-powered 43kW charging point. The more powerful R110 can't accept such a high rate of charge; the same 0-80 per cent battery top-up takes a further 35 minutes.

It’s worth noting you can't charge the ZOE from a standard household 3-pin socket, so you need a wallbox for its Chameleon charger (that can take charge at different levels of power, from 3-43kW), which is supplied and installed in the purchase price.

With the plug-in car grant of £3500 prices start from £18,420, which is five grand less than the Nissan LEAF, but you then have to lease the battery. Payments reflect estimated annual mileage, and start from as little as £59 per month (up to 4500 miles) or £110 per month (for unlimited use). On the upside, Renault promises to replace them if they ever dip below 75 per cent efficiency. Alternatively you can buy an ‘i’ version outright, including the battery, but with prices starting at £23,770 and the fact you have to deal with any problems that arise after the five-year/60,000 mile warranty, we'd recommend you lease the battery separately. Exterior-wise it’s completely different to a Clio and there's not much in the way of styling to tell you this is an electric car, save a subtle charge port and some ZE badging. Inside the switchgear and dash is carried over from the Clio but a digital TFT display replaces the conventional dials. Overall, it feels well-built but some of the plastic surfaces look cheap and scratchy compared to its rivals such as the Volkswagen e-Up or BMW i3, but then the ZOE massively undercuts the prices of both. The standard 7 inch R-Link infotainment screen is reasonably intuitive, but frustratingly you can only get the Renault ZOE with Android Auto, not Apple CarPlay.

It comes with generous levels of standard equipment (including 15 inch alloy wheels, electric windows, rear parking sensors, climate and cruise control, Bluetooth connectivity, USB socket, DAB radio, touchscreen infotainment and TomTom navigation system) and there are three trims available – Dynamic Nav, Signature Nav and S Edition Nav. The entry-level Expression Nav is the only model available with the shorter-range 22kW battery, the other models get the 41kW version, along with the option of the Quick Charge motor. The driver’s seat isn’t adjustable in height, and while the steering wheel moves for reach and rake, a taller person will most likely find it more difficult to get comfortable. That aside there is plenty headroom and legroom in the front and there are lots of storage options. Like most Renault models, in converting from left- to right-hand-drive the manufacturer didn’t move the fuse box, and it takes up half the space in the glovebox, which is shame.

Providing the front seat passenger is prepared to compromise their own legroom, rear seat room is good; it’s definitely more than adequate for three children. The rear seatbacks don’t split when they fold down and the location of the batteries means you don’t get a flat load area but there’s more boot space than in a Clio with 338 litres so it will easily accommodate a small pushchair, few suitcases or big weekly shop. It’s a small gripe, but there’s no hidden storage for the charging cables. For anyone considering the Signature Nav model with the upgraded Bose sound system, they will have to compromise on space with the amplifier taking up a significant amount of room in the boot. 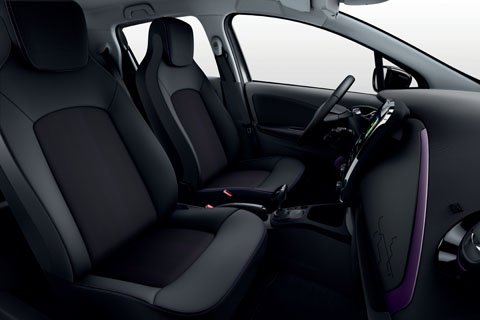 With the ZOE, Renault offers a practical supermini with all of the benefits of electric power including low running costs and real-world longer range than most electric cars. In fact, it’s one of the few cars on sale that shapes up as a true rival for the Nissan LEAF, with the exception of residual values of course – the ZOE dropping in value faster than most electric cars.

The lack of outright power is not suited to everyone either and the rather basic, drab interior doesn’t match up to its exterior design, but it’s a great entry into EV ownership and ideal for daily city-based driving. The ZOE achieved the maximum five-star Euro NCAP rating when it was crash-tested in 2013, and although a lot of rivals now have more driver aids as standard, it has still impressed the world’s motoring press. It was one of the finalists in the 2013 World Green Car of the Year; named the What Car? Car of the Year 2018 Best Electric Car Under £20,000 and the Best Small Company Car 2018 by Carbuyer, and won the Eco Car Award at the 2018 carwow awards.

Don’t believe the journalists? It was Europe’s best-selling electric vehicle in 2016 and 2017. It’s fair to say Renault is definitely one of the more forward thinking manufacturers when it comes to electric cars. 'Free' EVs given away in French and German schemes