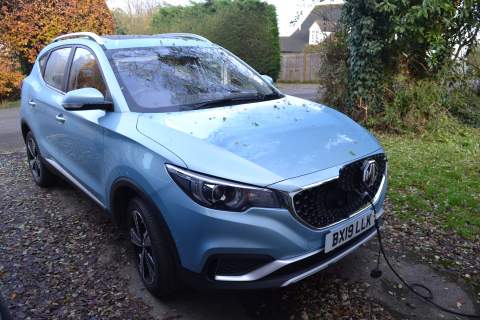 The MG ZS EV is the first family- and wallet-friendly electric car. Discover EV was invited to the launch at MG’s multimillion dealership in the heart of London but only got the chance to drive it for 30 minutes. This time we had a week to review it.

With the first 1000 customers able to snap up an MG ZS EV at a launch price of just £21,495, the car maker received unprecedented demand, securing that amount of orders in just two weeks. There are not many options when it comes to affordable family electric vehicles and so MG, clearly recognising they had seen a gap in the market, decided to extend their offer to match the government grant for the next 1000 customers.

When we wrote about our first impressions of the car we said that the MG ZS EV may well be the start of an era for one of the most famous names in British motoring (albeit one that’s now Chinese owned and built!). While it is undeniably a great value car, we did come across a few issues.

The not so technologically advanced MG Pilot driver assistance suite

The MG ZS EV is touted as the most high-tech MG ever, with the inclusion of its MG Pilot driver assistance suite (which comes as standard on Excite and Exclusive versions) and includes Lane Keep Assist, Adaptive Cruise Control and Traffic Jam Assist. The trouble is when it did work (our pre-production test car had the tendency to throw up error messages about the lane departure warning system and its inoperative cruise control system throughout our time with it) it just didn’t work very well. We certainly wouldn’t put it on a par with the systems from BMW or Volvo.

What else was annoying?

The infotainment system is not the best – woefully slow to respond to any inputs and complicated to use. The navigation doesn’t allow you to search for charge points either, which is a bit useless in an electric car. You can at least hook-up your smartphone and use Apple CarPlay or Android Auto.

The MG ZS EV boasts LED technology for the front daytime running lights and rear lights which auto dip, but again it’s not entirely reliable causing a few fellow dazzled drivers in our path. Oh, and at one point when my colleague was driving at night the lights turned off by themselves!

And another thing (sorry MG) – when you turn off the vehicle and go to walk away it sounds a loud audible warning to take your key, which is quite a useful feature we’re sure – however it also does it when you are then inside the car and about to drive it away! And it’s so intrusive that we’re sure it must have woken up our neighbours when returning or leaving home at unsociable hours. Whenever I would get annoyed my three-year-old son would chirp up defensively “That car just playing a tune, mummy”. Clearly it didn’t annoy him as much!

What about that WLTP-accredited range of 163 miles?

While 163 miles is more than enough for the average driver, other manufacturers are offering 200 plus miles. The Hyundai IONIQ Electric for example offers up to a 194 mile range, but does cost £29,450 which in line with MG’s current offer is almost £5000 more than it’s top spec Exclusive trim model. It is at least fairly accurate if you drive it very efficiently, and the delivery driver who has had lots of time behind the wheel of the MG ZS EV told me that he has seen 175 miles on warm days. However, switch on the air conditioning and any other systems and the range will rapidly deplete – losing up to 10 per cent he reckoned. Add lots of motorway miles or cold weather and you are more likely see a 130 mile range.

We had a rather wet week during our time with the car and unfortunately the front and rear windscreen would regularly mist up necessitating the need for the demist button. As a result of this we had to interrupt our journey from home to Bluewater shopping centre to charge the car as at some points we were losing five miles of range over every one mile driven. The journey is a total of 45 miles. We had 90 on the clock when we left our home, but by the time we got half way we had just 30 miles left. While we had enough range to reach Bluewater, where there are chargers (that are fee to use by the way) had they been out of use or occupied we wouldn’t have got back home. Obviously had we charged the car the night before there wouldn’t have been an issue but for the interests of journalism I was trying to investigate how many miles we could get on one full charge.

It’s a small bugbear but the way the charging port cover at the front flips up means accessing it is a bit awkward requiring you to crouch down to properly access it and there is also a lack of timed charging. Most other electric cars have this and many more have phone apps to make it even easier to control and monitor charging. The MG does not.

After a week with the car driving 155 miles of mainly B-road and some motorway we were averaging 2.7 miles per kilowatt hour, which puts it on a par with a second-generation Nissan LEAF. The official WLTP combined miles/kWh figure is actually 3.3 – and again if you drive like Miss Daisy with no air con or anything else then it’s probably feasible.

While we’re on the subject of range, to see how many miles you had until you needed to plug in required you to press either the Battery toggle on the centre console, or shuffle through various menus on the steering-wheel mounted buttons to get it permanently displayed on the instrument cluster, which is a little infuriating.

During the press launch we were given a 12 mile route to drive through the centre of London which was shared with another journalist so what we actually got was half an hour sat behind the wheel mostly spent frustrated at traffic, roadworks and angry cyclists, rather than experiencing the car itself.

We said first impressions were really rather good, the ride was smooth, the steering precise and nicely weighted and to some degree we were right having never got above 40 mph! Out on the open countryside driving at higher speeds it does get upset by large bumps and deep ruts, but it does respond well as being one of the lightest EVs currently on sale, it feels more agile than its pricier rivals.

On the motorway it’s comfortable and quiet, and while the top speed is only 87mph it doesn’t run out of puff around the legal limit, with enough poke to confidentially overtake.

We also said during our first drive of the car that the brake pedal was at least predictable whatever level of regeneration you opted for, which is a plus for the MG as so many other car makers struggle with successfully integrating regenerative and friction braking into the pedal’s travel.  Unfortunately when manoeuvring out of our drive the brakes were so snatchy that at times it felt like you were going to go through the windscreen! Also at one point I wasn’t able to activate the third level of regenerative braking with the warning Regenerative Braking is Limited Please Use The Brakes coming up.

The MG majors on interior space boasting some of the most generous shoulder, leg and headroom in its class, with plenty of room for two adults to sit in comfort in the back. With the panoramic opening Sky Roof that comes with the Exclusive model that we had on test it also feels light and airy, the higher driving position gives you a more commanding view of the road, and the seats are comfortable. Boot space is decent (and includes a false floor for the cables) with plenty of cubbyholes in the cabin itself, but the glovebox is utterly pointless – literally just enough room for a car manual.

It doesn’t look bad either – with an SUV body shape it’s a design that appeals to buyers globally, while inside it’s also rather pleasant. Well-weighted and simply laid out switchgear, soft materials and stitched leather effects. It has a smart-looking dashboard although some of the panels however were creaky which isn’t good on a car with less than 5000 miles on the clock!  Some of the plastics are on the scratchy side too.

Are its flaws worth the bargain?

At the end of the day it is hard to fault a family-sized electric car that cost less than £25,000 and comes with a longer-than-average warranty.

What you have to be mindful of is that old adage… You get what you pay for. It’s hard to say whether the electric glitches we experienced will plague production EV ZSs, but it’s not a great advert. While there are some areas that could be improved upon there’s no getting away from the fact that it’s significantly cheaper to buy than any of its rivals, even the entry-level Excite model comes with a decent amount of equipment (MG Pilot suite of driver assistance technology, keyless entry, smartphone mirroring, sat nav, air conditioning, auto headlights, rear parking sensors, 17 inch diamond cut finish alloys). While it didn’t prove terribly efficient on our test (which probably explains why the Hyundai has a longer range despite having a smaller battery) at the current cost of electricity it’s irrelevant.

If you’ve been wanting to make the switch to electric but have been put off by high purchase costs, the ZS EV is a good option: well-equipped, decent to drive, spacious, practical, comfortable and with a useable range. It’s also recently achieved the coveted Five Star Euro NCAP rating further supported by MG’s famous 7 Year Warranty, underlining the car’s value-for-money. The current Euro NCAP tests are the most stringent ever, making this Five Star rating a significant achievement for MG, who’s previous models had only scored just three stars in its crash tests.

The ZS EV brings electric car technology to a wider audience and represents an exciting era in the company’s history. More than 3000 customers have placed orders since July (with deliveries commencing in September) – proving to be record-breaking sales for the brand. Currently, thanks to MG’s latest offer, the ZS EV in top-spec Exclusive trim is available from just £24,745, after the Government’s plug-in car grant and the generous £2500 MG customer saving have been deducted. Buyers looking to order the entry level Excite version can go electric from just £22,745, making it a good alternative to a Hyundai Ioniq Electric Premium or Nissan LEAF 40kWh N-Connecta.

MG extends its £21,495 offer after record pre-orders of its ZS EV