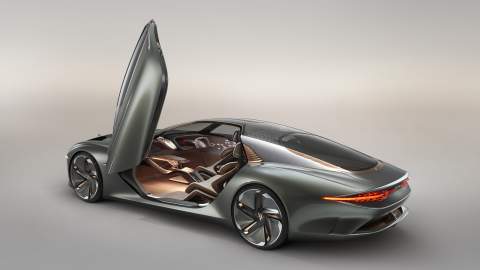 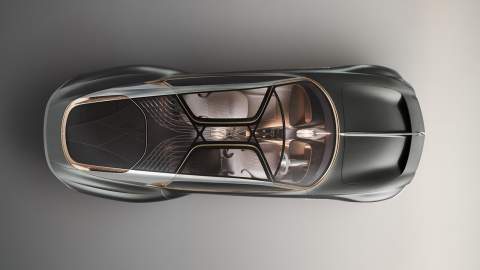 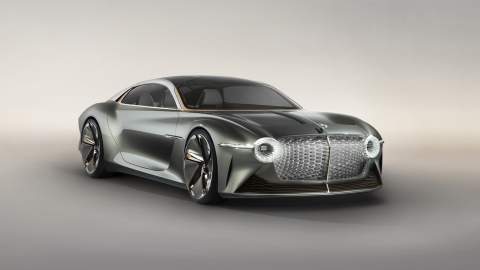 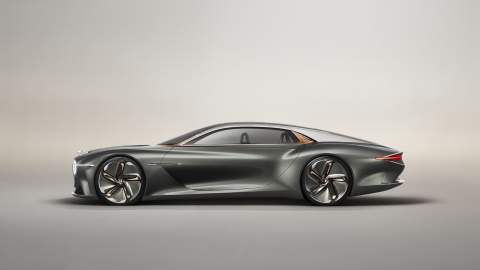 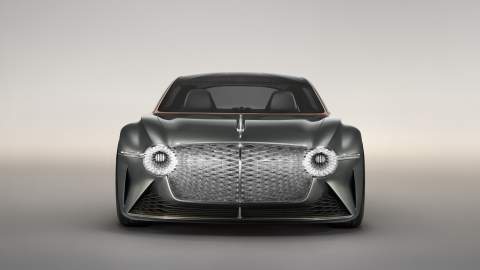 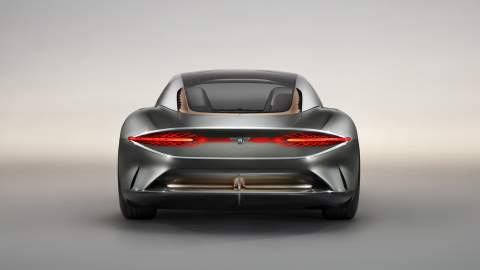 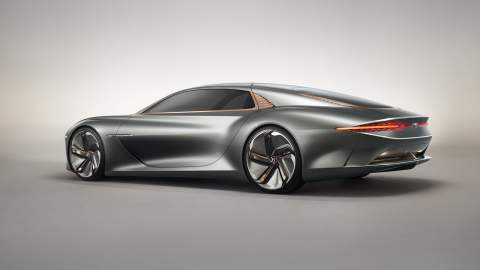 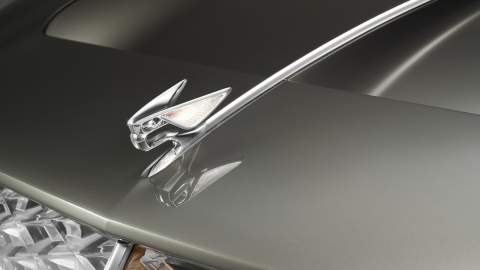 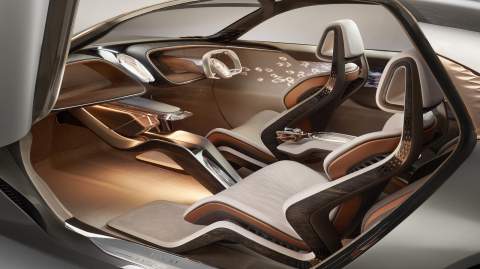 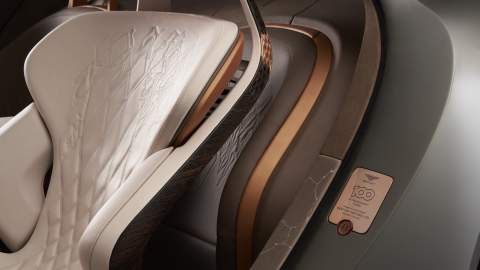 Never ones to shy away from the bold and the brash, Bentley has revealed a brand-new luxury concept which demonstrates its vision for the future of sustainable, luxury motoring. Called the EXP 100 GT, the car is part celebration of the British brand's centenary and part physical embodiment of how Bentley sees high-end motoring for the year 2035.

The EXP 100 GT is based on a fully electric platform and looks to build in autonomy on the road, and experience-enhancing artificial intelligence (AI) in the cabin. Sustainability isn't limited to being a zero tail pipe emissions vehicle; the concept is a test-bed for all manner of materials, including 5000-year-old, copper-infused riverwood – but more on that in due course.

On the outside the EXP 100 GT is unmistakably a Bentley. It's big – really big – at 5.8 metres long and 2.4 metres wide. Each of its two doors is two metres long and, in order to enable access in the unlikely event it ever gets parked close enough to another car, the doors pivot out and upwards for ease of access. When opened, the car stands almost three metres high.

Various design cues hark back to Bentleys of yore and reinforce its century of heritage. The round LED headlamps and oversized grille ape the infamous Blower Bentley, while further back there is the recognisable R-Type Continental haunch. At the rear, a ‘horseshoe’ section of the boot is a 3D OLED screen on which lighting effects can blend in with the rear lamps.

Throughout the EXP 100 GT, Bentley is keen to highlight its sustainable credentials. Copper and aluminium feature heavily in the bodywork, just as it did 100 years ago in W.O. Bentley's designs. A liberal use of carbon fibre is, admittedly, a bit more 21st century. The newly conceived exterior colour, called Compass, uses paint that contains a pigment which reflects colours depending on what light is shining on it. It is made synthetically using rice husks – a harmful bi-product of the rice industry.

Beneath that rather extraordinary looking bodywork, the Bentley EXP 100 GT is based on a brand new EV platform which ensures it retains the brand's current, conventionally-powered Grand Touring credentials. Being a concept, Bentley's figures are based on how it is predicted battery and charging technology will develop rather than existing available tech – but that's half the fun of concept cars!

Bentley conceives that, with future battery technologies achieving five times the energy density of current batteries (no pun intended), a range of 435 miles will be possible. Charging to 80 per cent capacity would take just 15 minutes, and the process would be managed by the on-board Bentley Personal Assistant AI.

Crewe's finest has always favoured galloping performance delivered by big displacement, lazy engines with mountains of torque. The EXP 100 GT promises much of the same, delivering over 1100lb-ft of torque through a torque-vectored chassis enabling 0-62mph in 2.5 seconds and a 186mph top speed. Part of the reason for this extraordinary turn of speed is a predicted weight of just (for its size) 1900kg thanks to the lightweight materials used throughout.

Putting the Grand into Grand Tourer

Inside, Bentley has gone to great lengths to combine supreme luxury with sustainability. Almost everything you see and touch is hand-crafted, and the technology that you don't see is in-line with the autonomous future that many are predicting.

The cabin of the EXP 100 GT seeks to provide a naturally lit area that is both cosseting and futuristic, and able to change its characteristics depending on the occupants' desires, feelings or moods. Five different modes can be chosen or changed through gesture control: Enhance which seeks to bring the outside world inside; Cocoon which almost shuts out the outside world to create a protective space; Capture which records experiences from inside and outside the car to be built into its unique history; Re-live so elements of a Grand Tour or journey can be replayed; and Customise through which owners can take control.

Wood has always been a big part of a Bentley cabin, cut from the finest trees, crafted and exquisitely finished. It's no different on the EXP 100 GT, with the wood flowing from metal surfaces and into glasswork. Something Bentley is very keen to point out is its use of 5000 year old, copper-infused riverwood, sourced within the UK from the Fenland Black Oak Project and dug up from peat bogs, lakes and rivers where it has been preserved. It's an extraordinary material to be using, and not the kind of stuff that just grows on trees!

The embroidery on the door panels is supplied by Hand and Lock – a London-based company that has traditionally plied its trade on royal and military dress uniforms. Leather is supplied by Bridge of Weir, a specialist company from Scotland, which uses locally-sourced hides for use within the cabin. In an exclusive move by Bentley, the company has also used a leather-like material made from the bi-products of wine making – which we assume is available in Burgundy, ahem!

Air filtration is utilised in the EXP 100 GT to help bring the outside world into the glasshouse-style cabin. Controlled through the Bentley Personal Assistant AI, it will purify the air entering the passenger area but maintain the natural environment aromas when desired, but also shutting them out in – for example – urban settings. If drivers want to smell the true essence of Bentley, the brand has worked with ‘ethically-aware fragrance house’ 12.29. And as you're wondering, the true essence of Bentley apparently smells like sandalwood and fresh moss. Naturally.

The Bentley EXP 100 GT is optionally autonomous. It manages the driving experience based on the external environment and passenger well-being which might include maximising an exhilarating self-drive across mountain roads, or disengaging from a stressful, inner-city commute. As the driver becomes a passenger in autonomous mode, the car – and the Bentley Personal Assistant – work to enhance the experience by reading biometric data.

For example, biometric seating can be configured in three different ways, depending on whether the owner is driving or using autonomous mode. Sensors monitor temperature, passenger position and environmental conditions to deliver the ultimate in comfort, whatever the conditions.

Bentley Personal Assistant pre-empts passenger needs and can even maximise comfort based on its knowledge of its owner. For example, reactive seat surfaces respond to passenger position during driving, automatically offering more support when the need is sensed. In addition, biometrics are embedded throughout the Bentley EXP 100 GT to track eye and head movements, even blood pressure. Whether it can call the ambulance service if a driver's vital signs exceed safe limits is unclear.

We rather like the Bentley EXP 100 GT. It's ostentatious, possibly pretentious, massive and powerful – basically everything a Bentley should be. But underneath the pomp and circumstance it's environmentally sound, well thought-out and sustainable (even with its 5000 year old, copper-infused riverwood). Moreover, it looks to a future of both EV technology and the physical act of driving – or increasingly minding – a car which would maintain the essence of Bentley but without built-in obsolescence.

What a way to celebrate 100 years!