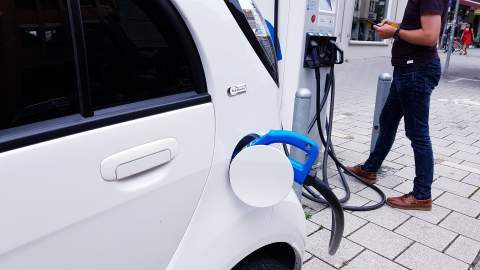 The government is doubling the funding available to local authorities for them to install on-street, public charging points. Announced by Transport Secretary, Grant Shapps, an additional £2.5 million will fund the installation of over 1000 new charge points on residential streets with the aim of providing infrastructure for those who want an EV, but don't have private off-street parking.

Government funding to support the installation of on-street residential charge points has been knocking around since 2017. The imaginatively named 'on-street residential charge point scheme' had £4.5 million allocated in 2018/2019 and 2019/2020, which with the additional £2.5 million brings the total to £6 million, significantly increasing its reach.

Transport Secretary, Grant Shapps, said: “It’s fantastic that there are now more than 20,000 publicly accessible charge points and double the number of electric vehicle charge points than petrol stations, but we want to do much more.

“It’s vital that electric vehicle drivers feel confident about the availability of charge points near their homes, and that charging an electric car is seen as easy as plugging in a smartphone. That’s why we are now doubling the funding available for local authorities to continue building the infrastructure we need to super-charge the zero emission revolution – right across the country.”

Given the government's commitment to net zero emissions by 2050, it's perhaps no wonder that increasing amounts of money is being pumped into such schemes.

Already, 16 local authorities have received funding and over 1200 charge points are set to be installed by the end of this year. With the scheme funding 75 per cent of the cost of purchasing and installing a charge point, and the cost of charge units continually falling, it is hoped that the money available will go far further than it would previously have been able to.

In terms of the infrastructure itself, each application for a grant is undertaken on a case-by-case basis, but it will include everything from lamp post-based chargers to more traditional designated bays with standalone chargers. Even future charging solutions will be eligible as soon as they become available.

The additional funding comes on the back of record growth for EV registrations in the UK with sales of pure electric cars almost tripling in July alone. Year-to-date, a total of 30,933 plug-in cars have been registered (including both PHEVs) which is 2.2 per cent of the total car market, and the appetite for EVs is only set to continue this rapid growth.

Keeping up with the demand for infrastructure remains a challenge, however, and the government's place in providing it is still being worked out. “The success of the UK’s electric vehicle revolution hinges on access to charging infrastructure and many neighbourhoods so far feel disconnected,” said AA head of roads policy, Jack Cousens.

“This announcement is therefore very welcome news but there is still a long way to go.”