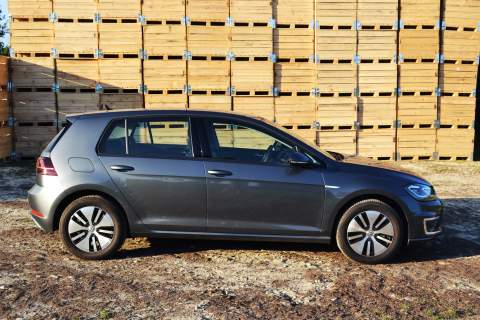 If you’re looking to make that first step into EV territory the e-Golf should be a car that works for most people.

It was a brilliant advert and played to an idea that the Golf had become a ubiquitous name referred to in many contexts – it was a descriptor for a hatchback car that isn’t actually a Golf. It was the choice of the hatchback car market and a model that all other car manufactures aspired to create. Certainly 10 plus years ago this probably wasn’t far from the truth. The VW Golf was one of the most obvious choices at the premium end of the hatchback segment and I’m sure other brands used it as a benchmark.

Personally I’ve driven many Golfs over the years and even owned a bog standard Mk5 S and R32. I can say that every one of them drove exactly “like a Golf”. There is something quintessentially Golf about a Golf, a feeling that I’ve never really got about any other car throughout their model years.

Perhaps I’ve been brainwashed by DDB London, the agency that put the ad together, but it didn’t stop me getting into the e-Golf and getting exactly the same feeling. Before I even pulled away for the first time I was fairly certain I knew what it was going to drive like.

Aside from the dashboard display being different, the lack of engine noise and the regenerative braking I wasn’t far wrong. Many of the EVs we drive feel very different to their ICE counterparts, which is not necessarily a bad thing, but VW have managed to make the e-Golf feel like a regular Golf to the extent that if you got into the car not knowing it was an EV and had the regen off, you probably wouldn’t initially realise.

Even opening the bonnet reveals an ‘engine’. We’re so used to the things being locked away or behind plastic covers with high voltage warning stickers, that the first time I opened the bonnet I had to take a step back and wonder if I really did have an e-Golf.  All the usual gubbins are there and its configuration is very much like an ICE car, although it’s obviously an electric motor.

To a certain degree this took some of the magic away. It almost went too far towards being normal; we wanted to find a little ‘frunk’ there with no accessible bits and pieces. Instead it almost looks like VW have taken a Golf and simply put an electric motor in where the ICE engine was.

In retrospect it’s probably no bad thing and goes some way to explain why it feels “like a Golf” and with the general public still treating EVs with a huge amount of suspicion due to their difference, the e-Golf brings a surprising amount of familiarity. 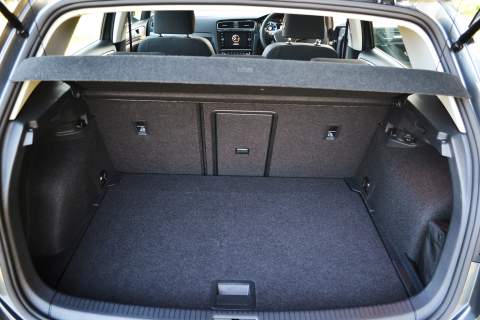 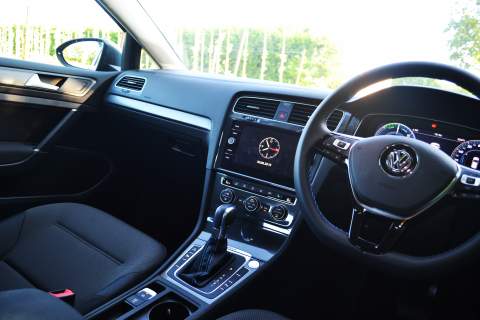 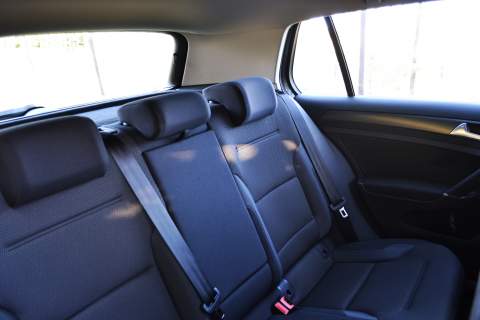 Golfs have always handled well and the e-Golf is no exception up until nine-tenths. It feels grounded and solid for most of the driving you’d ever do in it, but give it full beans and you then start to notice the setup. You feel the added weight in the floor pan as if the car wants to turn on itself like some kind of strange yaw control. It feels like you’d expect a Mario cart to feel. We can’t make up our minds if this is a good thing or not.

It’s certainly not the quickest EV we have tested. VW claim a 0-62mph time of 9.3 seconds, but to be fair the car feels a lot quicker than this. It’s probably down to the 0-40 being much faster before then tailing off towards 62mph. Its top end is only 93mph so 62mph is into the top third of its capability.

For the average driver though it feels more than quick enough and decidedly nippy in town with the torque of the electric motor taking the car off the line with some force. It does make us wonder what an e-Golf R would be like, something we’d very much like to experience.

The gear selector enables the driver to select park (P), reverse (R), neutral (N), Drive (D) or Braking (B). In Drive a push to the left or right of the gear stick allows the driver to select the level of regen. The first pull down engages D where the second pull down engages B, which is effectively D with maximum regeneration. Personally I don’t understand why anyone wouldn’t want to drive an EV without max brake regen, but I guess its personal choice.

The car then has several driving modes. Normal, Eco and Eco+. The car starts in normal setting but the driver can then select either of the two eco modes via a button awkwardly positioned the other side of the gear selector.

Eco limits the car to 65mph and turns down the ferocity of the air con (no bad thing) and Eco+ limits the car to 58mph and almost turns the air con off. There is also blue score that the car gives based on how efficiently it is being driven. It’s a number out of 100 but we didn’t see any difference in this based on the driving mode. It would seem entirely possible to drive as economically as possible without engaging these modes.

This blue score is fairly useful giving you some gauge about how efficient you are driving, but the blue training app, which is a series of graphs and diagrams we simply didn’t understand. 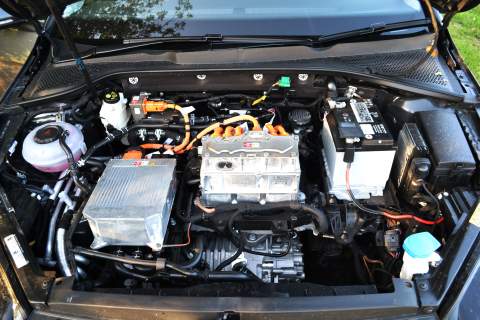 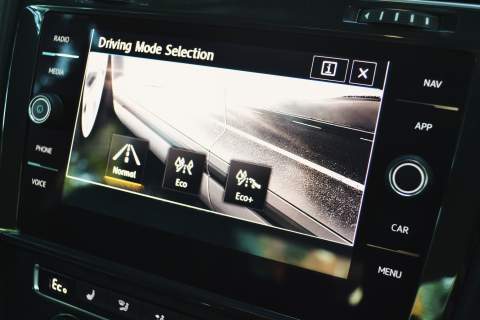 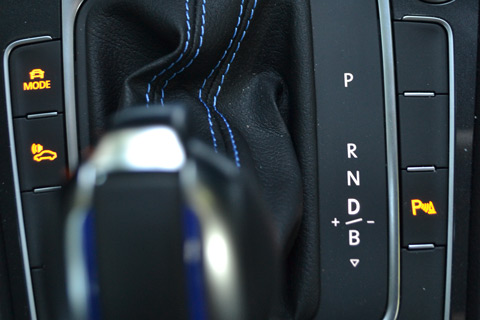 We had our car for a week. I commuted to the office in it every day which is a drive of almost exactly 20 miles each way taking in about 40 per cent B roads, 40 per cent motorway and 20 per cent town. Each day the car would indicate around 125 to 135miles range which proved very accurate as I returned with between 85 and 95 left. This was driving with a blue score of around the 86 mark, but also with moments of full throttle whilst enjoying the B roads.

The range display whilst driving is somewhat less accurate as it seems to calculate the range too quickly. Any steep hill or overtaking would suddenly wipe 10 miles off the range. This would return and average out over time but it you’ve ever driven an older BMW on the last eighth of a tank you’ll understand what I mean. 20miles, 5 miles, 10 miles, 0 miles, 30 miles, empty.

Over our time with the car we averaged between 4.1 and 4.6mi/kWh. We charged the car overnight on a normal household three-pin plug and the car suggested that replacing the 40-50 miles I did each day would take four and a half hours. I didn’t check this but it was always fully charged in the morning.

Sources vary but most we’ve checked suggest my commute is substantially further than the average. Even if I did 80 miles a day I fully suspect I could charge the car to full overnight and even if I used the full range a few days a week it would top back up over time. So even with the limited real world range of around 125 miles (VW claim a 186 maximum but agree 124 is more realistic) the e-Golf is a fully viable prospect for my lifestyle and I would imagine many others as a second or even first car. 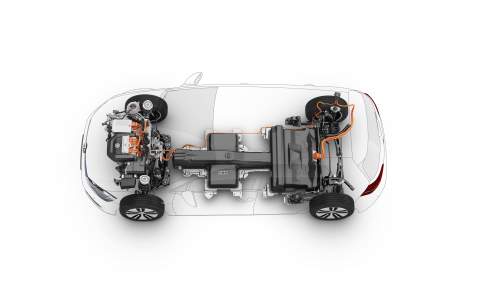 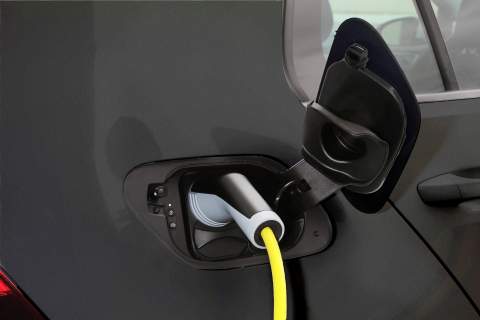 Outside there isn’t much to distinguish the e-Golf from the rest of the line-up except a slightly larger charging point flap which accommodates a Type 2 adapter with an added pull out for CCS, the model designation at the rear, the lack of vents at the front and of course the deletion of a tailpipe.

Inside the story is much the same. The interior is very similar like the rest of the Golf range with the only real differences being the dials on the Active Info Display. The rev counter is replaced by a power and recuperation dial.

The Active Info Display is great and allows the driver to configure different information to be displayed in and around the dials and a map with the current route if one is set. However it feels like considerable effort has gone into making it not quite as good as the Audi equivalent. It’s slower to react and to update, not as configurable and doesn’t feel as premium.

The centre display called the Discover Navigation Pro infotainment system is standard on the e-Golf and reacts to hand recognition, so extra icons appear as you go to tap the screen and you can make gestures to move between music and radio stations.

Our model was fitted with radar guided cruise control which worked very well. It can’t change lane for you but it will keep speed and distance.

On a less positive note we found the air con extremely frustrating. Set on auto any temperature requested that was slightly lower than the actual temperature meant ice cold air was blown over the driver. Likewise you got a furnace if set to something slightly higher. The car seemed to sense that no one was in the passenger seat and thus turned off the air going to that part of the car which may go some way to explaining its overzealous efforts on the driver, but it was annoying nonetheless. Clearly we could have set the fan and temperature ourselves but shouldn’t have to.

On the left hand side of gearstick there is a mode selector (more on that later) and a button to enable and disable an optional engine sound. Both were difficult to access and caused you to peer over the gear selector to see them and the engine noise didn’t seem to work at all regardless location or speed. Given the recent new EV warning legislation that came into play from 1 July, we’re guessing any new e-Golfs will come fitted with an Acoustic Vehicle Alert System (AVAS).

Something that still intrigues us are the five little extra bars on the power meter titled E-MAX. It would seem that using 100 per cent power would drain these and overtime they would be replenished with efficient driving. However it didn’t feel like any additional power was available when these were draining. Even looking on a number of forums (and translating German forums) no one seems to be sure what they were for. It makes sense in a hybrid environment giving an active boost and indeed there is something similar in the GTE, but in an EV it would seem less clear. 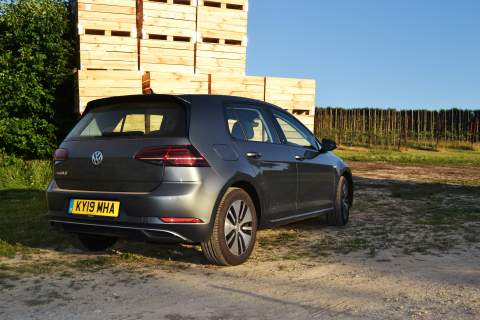 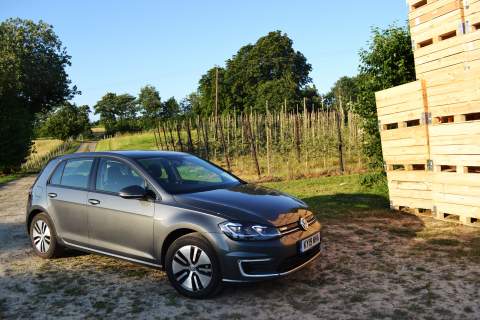 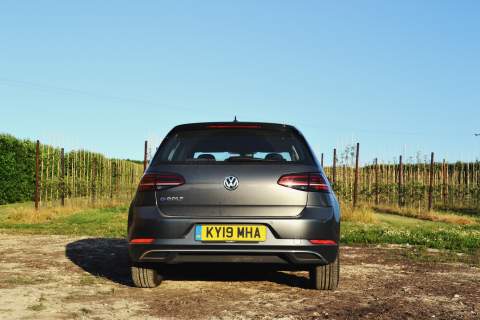 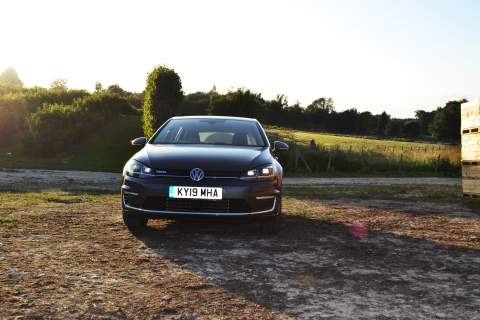 Whilst the e-Golf is one of the slowest EVs to 62mph, has a low top speed and one of the smallest ranges compared to what is available right now, it won us over on so many other levels.

It feels exactly like what it is based on and makes the prospect of transitioning from ICE to EV so much less scary and so much more familiar. It may not have the 250 mile plus range of the newest small EVs but I used it as my sole car for a week, slow charging from home with no range anxiety whatsoever.

Volkswagen have also set a goal that the battery packs should still have 80 per cent of their original power after ten years, so any fears of batteries needing replacing should be set at ease.

To sum up Volkswagen has taken its Golf and whilst it’s given it a heart transplant it’s fundamentally the same car – this is by far one of the best electric hatchbacks for its time that we have tested.