With Volkswagen’s flexible all-electric MEB platform not due to support a city car until 2023, the brand has refreshed its e-up! promising more for less. We take a look at the latest incarnation

The Volkswagen e-up has always been aimed at city dwellers and commuters, but thanks to greater energy content of the battery the revised version has 159 miles (WLTP), also making it perfect for any families  looking to go electric with their second car. Better still with the plug-in car grant the new generation e-up! comes in at just over £20,555 (vs £13,105 for the standard conventionally powered up!) or £280.76 on PCP with a deposit of just over two grand (vs £192.26). Given our main criticism of the outgoing e-up – range (previously 83 miles) and price (with a difference of £7450 as opposed to £9790 between ICE and EV) – at least VW has made improvements on both.

In terms of handling nothing has changed. According to VW’s press release, the e-up! is really fun to drive, we would call the MINI Electric or Honda e fun to drive even if they err on the firm side, not the VW e-up! sadly. Yes, it’s better than its petrol sibling thanks to a lower centre of gravity, with the batteries being integrated into the vehicle floor, but it’s not exactly engaging (or enjoyable) during a B-road blast. Ride quality is at least good, with it managing to absorb our less than perfect roads, steering gives reasonable feedback and it’s fairly well-controlled through the corners in terms of body roll, but you don’t want to be throwing it into a series of tight bends.

Where it does come into its own is around town, with punchy low-speed acceleration making it easier to pull away from junctions and nip in and out of traffic. Acceleration from 0 to 62mph now takes 11.9 seconds as opposed to 12.4, while top speed is still 81 mph.

The e-up! has five levels of regeneration – labelled D, D1, D2, D3 and B. D allows the car to roll freely when no accelerator or brake input is detected, while D1, D2, D3 and B use the electric motor to re-capture energy that would otherwise be lost by braking, in increasingly thorough intervals. When B mode is active, the energy regeneration can be as much as 40kW at 62mph. When the driver activates the brakes heavily – deceleration of around 0.3g or more – the car’s standard, hydraulic brakes kick in.

There are also three different driving modes to choose from to help control how the car uses its power: Normal, ECO and ECO+. Eco mode limits the motor’s power to 66bhp and torque to 123lb ft, reducing the car’s top speed to 71 mph and switching off the air conditioning, while the stricter Eco+ mode limits the e-up! to 52bhp and 98lb ft, with top speed of 56 mph.

The greatest improvement with the new e-up! is the capacity of the batteries, which has risen from a gross 18.7kWh to a usable net capacity of 36.8kWh gross. As a result, the vehicle’s range has been extended up to 159 miles (WLTP), almost double that of its predecessor’s 83 mile range – in comparison the MINI Electric has 145 miles.

Going back to that battery pack, it now features a different type of battery cell – now a total of 168 pouch battery cells with a flexible outer shell made of aluminium-coated plastic, where the outgoing e-up! used prismatic battery cells. Thanks to the cells’ increased energy density and revised packaging, the battery volume has been reduced by around 20 litres and weighs just 15kg more than the outgoing system (including all controllers, fuses and connections) despite boasting double the capacity of the old one.

The range was very accurate, and using a mixture of dual carriage ways, country roads and town driving we averaged 50 miles each day during our week loan of the car, and just topped it up each night from a domestic 3 pin socket.

With DC charging at 40 kW, it would have been a lot quicker of course, taking 60 minutes to charge the battery to 80 per cent of its capacity. Like most EVs, the charging process can be scheduled in advance, initiated or stopped via your smartphone using the standard maps + more app. The app can also be used to operate the standard stationary air conditioning system in the e-up!. Charging the e-up! in the UK is also now more convenient and free of charge, if drivers choose to use one of the circa 2400 Volkswagen charge points at Tesco sites, in a deal linking the supermarket, Volkswagen and charging partner Pod Point.

Going for a Volkswagen e-Up over the regular 1.0-litre up! will obviously be costing you less on fuel bills and tax, but you’ll need to cover a lot of miles (and ideally through London’s Ultra Low Emission Zone where it’s exempt from the fee) to make up for the £7450 deficit.  The insurance group is also higher although still at the cheaper end of the scale (10E), but on the upside you get a lot of options thrown in as standard (see Comfort and Practicality).

The e-up! features bespoke exterior styling bespoke to identify it as an EV, with an exclusive front bumper incorporating C-shaped daytime running lights, a set of 15 inch Tezzle alloy wheels to aid aerodynamics and blue trim. Inside, you’ll find new front seats (now with height adjustment for the passenger) and a bespoke instrument binnacle with power use and regeneration gauge. Over the entry-level car, the e-up! also features high-spec touches like a leather-trimmed gear knob, handbrake lever and multifunction steering wheel (otherwise a £290 option) and chrome trim on the air conditioning panel and light switch surround. Overall, it is starting a feel a little outdated now, however.

The e-up! is only available as a five-door, otherwise it’s not any different to a petrol up!. Space in the rear is good, with plenty of headroom thanks to its boxy shape, though if you need to sit three in the back you should opt for the Renault ZOE, which also has a bigger boot. The 250-litre boot is pretty woeful actually and you’ll struggle to get any more than four bags of shopping in it, and that’s if you don’t carry the charge cables around with you. While it has a dedicated storage tray at the base of the boot it’s only really big enough for one.  There’s also little storage in the cabin itself with a cup holder front and rear and small door bins. That all said, for my three-year-old son and I, it was comfortable and practical enough to carry out a week of summer holiday activities.

As previously mentioned you do get a lot of standard kit, that otherwise would be options on its dirtier relatives, not just in terms of comfort and convenience but also safety and security. These include: climate control (£280), Light and Sight pack (£150) with automatic coming/leaving home lighting function and LED daytime running lights and rain sensor, Winter pack (£375) with electrically heated and adjustable door mirrors, front fog lights with static cornering function and heated front seats), carpet mats (£60), and the Cruise and Park Pack (£440) with cruise control, parking sensors and rear-view camera displayed via the vehicles audio system display. Lane assist is also now standard.

Infotainment is not the best (non-existent) with what it calls a Composition Phone radio system with a Bluetooth interface, an almost pointless 5 inch colour display providing information such as the radio channel and the image from the rear-view camera, and a maps + more dock. Basically this allows you to fit your smartphone at eye level and connects you with your car, friends and playlist but also shows you your route. I just used a TomTom and listened to the DAB radio.

The e-up! gets a three-year subscription to the We Connect e-remote mobile services app at least, allowing the driver to check on their e-up! when away from the vehicle. Benefits include remote charging management, pre-conditioning of the car’s interior prior to a journey to minimise the use of energy from the battery. Vehicle trip statistics and status can also be monitored remotely, allowing the driver to check the car’s state of charge, for instance.

The only other disappointment is the Euro NCAP safety rating. It was rated 3 stars but that’s mainly down to poor scoring on Vulnerable Road Users (46%) and Safety Assist (55%) – this car doesn’t have autonomous emergency braking which loses it a lot of points. Adult Occupant scored 81%, and Child Occupant 83%, at least, and every version comes with airbags, anti-lock brakes, traction control and lane-keeping assistance, as well as tyre-pressure monitoring and ISOFIX child-seat mounts in the rear.

So, the base price is lower than that of the predecessor model, and it has an increased (and therefore more useable) range. Despite its compact dimensions, it will comfortably accommodate four occupants, and it comes with plenty of kit as standard.

In Germany where the insurance categories are favourable and the price is reduced further by ‘environmental bonuses’ it’s proved a popular entry level to electric cars with 20,000 vehicles ordered over the first three months of this year. That means every second order of the up! series is for the fully electric version. In comparison the e-up! makes up around 5% of the UK’s up! Sales. Although VW owe that relatively modest figure to limited production for the UK market.

It is one of the cars with the lowest cost of ownership in the market, but at the end of a day it’s based on a design from 2011 when it went on sale in the UK, and its own mechanically identical cousins, the Skoda Citigo e iV is cheaper with prices starting from £17,455 (although is apparently no longer available to order according to the website) and the £19,800 SEAT Mii. So your best bet is to go for either of those, or spend an extra £4 to £6k and look at buying either the MG ZS EV, MINI Electric, Renault ZOE or Honda e, depending on your preference for handling, space, styling and range. 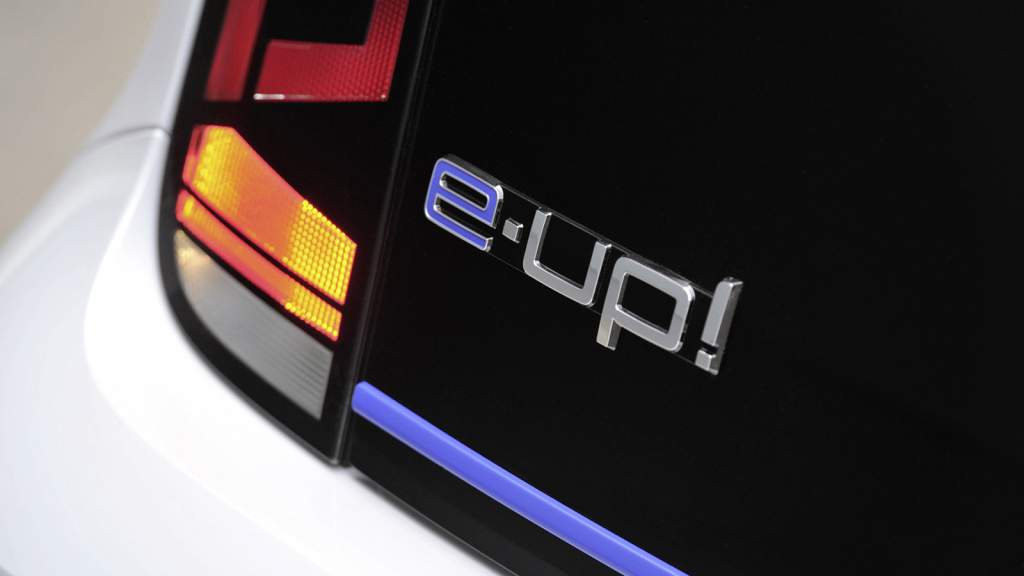 Volkswagen e-up! gains range and is also set to underpin...