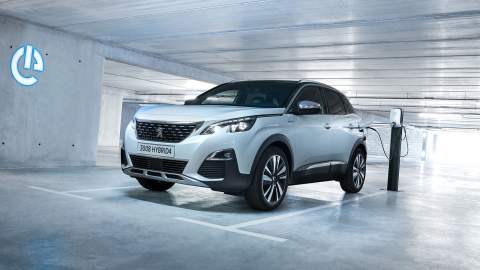 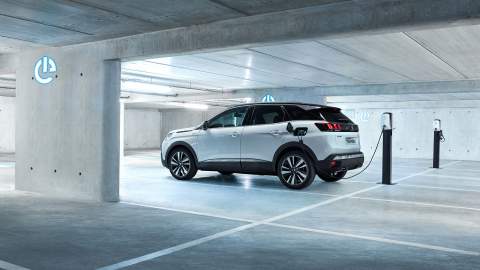 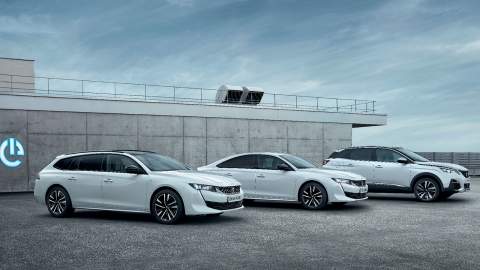 Not that long ago if you'd said Peugeot would be producing a c.300bhp, four-wheel-drive SUV that emits just 29g/km of CO2 we'd probably have thought you imaginative – at best. However, this is exactly what Peugeot has done with its new 3008 GT Hybrid4 PHEV SUV.

Arriving for order later this year, the 3008 GT Hybrid4 joins the increasingly crowded ranks of powerfully plug-in hybrid family SUVs – an area of the market which is only likely to get busier as manufacturers scramble to get models onto the market for this most popular of vehicle segments. So what does Peugeot's effort have to offer?

Peugeot's PHEV powertrain combines the brand's 1.6-litre PureTech turbo petrol engine – which produces 197bhp – with two electric motors which bring the total power up to 295bhp. Thanks to this, and the traction afforded by four-wheel-drive, the 3008 GT Hybrid4 will accelerate past 62mph in 5.9 seconds. There's no word on top speed, however.

On electric-only power, the 13.2kWh battery delivers 36 miles of WLTP driving – so expect closer to 30 in the real world. Charging is thankfully rapid, with zero-to-full taking less than two hours using a 7kW charger, making the 3008 PHEV ideal for a typical commute where there's a charger at the other end.

Company car drivers will certainly find the Peugeot 3008 GT Hybrid4 an attractive proposition as, thanks to CO2 emissions of just 29g/km on the WLTP cycle, the SUV falls into the lowest Benefit-in-Kind (BIK) rate. As of April 2020, it will be subject to a rate of just 10 per cent.

As well as the Hybrid4 variant, Peugeot will be launching a two-wheel-drive PHEV shortly after the first cars hit the road in early 2020. This will get an overall power output of 221bhp thanks to a 177bhp version of the PureTech petrol engine and a 107bhp electric motor located in the front axle and controlled by an eight-speed automatic gearbox.

Inside, the 3008 GT Hybrid4 gets Nappa leather trim, inevitably Peugeot's latest infotainment system and safety equipment such as adaptive cruise control with stop and go function and lane position assist.

David Peel, Managing Director of Peugeot UK, said: “The 3008 SUV GT Hybrid4 is the next step in Peugeot’s electrification journey. It will join the all-new e-208 and e-2008 SUV, and follows our philosophy of ‘choose your Peugeot, choose your powertrain’, as 3008 SUV buyers have the choice between efficient petrol, diesel and the plug-in hybrid electric technology for their car.”

Common basis for the 508 PHEV

Peugeot's 3008 GT Hybrid4 will soon be joined by PHEV versions of its 508 fastback and 508 SW estate. It's safe to assume that these will share the same four and two-wheel-drive powertrain options as those that we've detailed here for the 3008 SUV. This all falls into Peugeot's goal of electrifying its entire fleet by 2023 – a fleet that has recently been joined by both the e-208 and the 3008's little brother, the e-2008.

Update: 06.10.20 Peugeot has confirmed the prices and specs for the new 3008 Hybrid and Hybrid4 which is available to reserve now, and will hit showrooms early next year. Available with either a 221bhp powertrain with front-wheel drive or 295bhp in full fat Hybrid4 guise, the former starts at £37,530 and the latter at £42,530 in 'Allure' trim.

In Allure spec, the 3008 Hybrid gets 18 inch alloys, tinted windows, the Safety Plus Pack, Peugeot Connected 3D navigation with a 10 inch touchscreen and fabric upholstery. One step up in ‘Allure Premium’ spec brings open and go keyless entry, aluminium roof rails, a folding passenger seat, ambient lighting and textile door details. This costs £38,230 for the Hybrid 225 and £43,230 for the Hybrid4.

Peugeot e-Rifter coming in the autumn

If they keep the price sensible this could attract a number of would be outlander PHEV purchasers.