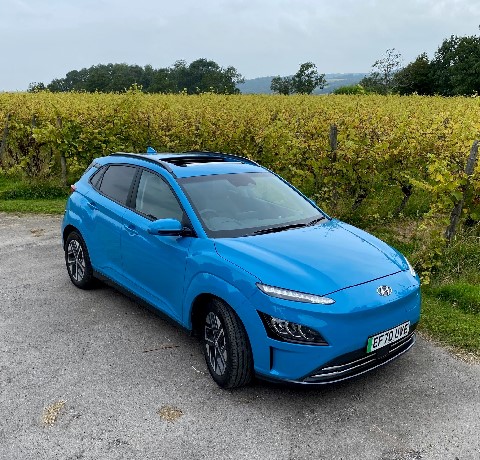 The Hyundai KONA Electric has received a series of updates. We take a look at what’s changed in comparison to its predecessor which we reviewed last year.

Since it was launched in 2018, the Hyundai KONA Electric has proved extremely popular, thanks to a great combination of design and excellent real-world range, not to mention a heap of kit. In its first two years, over 120,000 units were sold globally, with 53,000 of those in Europe. It’s certainly proved its worth in the long distance capability category too, after three production models set a new range record of 1026 kilometres on a single charge at the Lausitzring in Germany.

If you’re a family after an all-electric compact crossover it represents great value for money, however as the market for this type of car continues to grow, the Korean brand has seen an opportunity to up its stakes. As a result a load of upgrades – based around design, technology and practicality – have been added. Let’s get down to business. 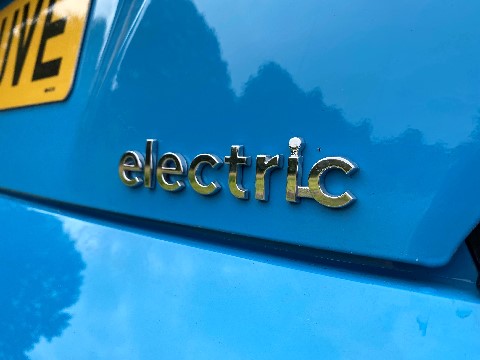 Unlike its petrol or diesel counterparts there’s no front grille, while other visual differences include the charge port (now asymmetric to make ‘a stronger statement about driving electric’ apparently), LED Daytime Running Lights and sharper headlights, now stretching around the side of the car and incorporating multifaceted reflector (MFR) technology. Air inlets in front of the wheel arch claddings aid aerodynamics while the air intake in the lower bumper is visually enhanced by horizontal satin accent bars.

Together with the new painted wheel arches, 17” alloys, and revised rear bumper and wider set tail lamps, the new KONA Electric looks a lot cleaner. It’s also longer than the previous version, but sadly doesn’t address the car’s limited rear seat and boot space given its only 25 millimetres. This is probably one of the car’s few negatives in addition to the quality of materials and general design that are not in line with the price tag.

And last but by no means least especially for those that want something other than red, black, white and grey, there are eight new colours including two-tone roof options. 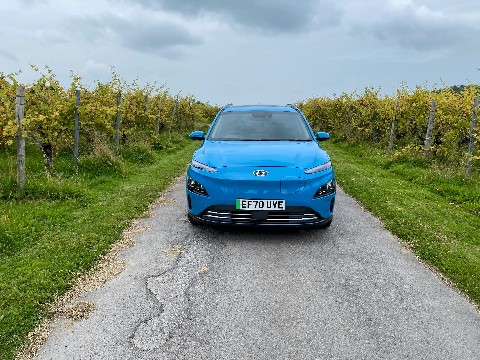 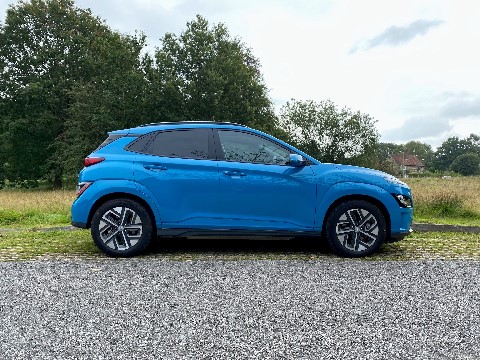 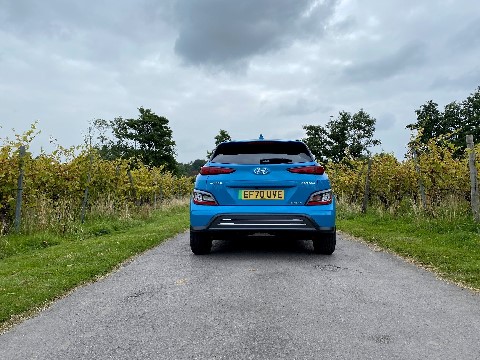 For the first time ever, the KONA Electric comes with a 10.25 inch digital instrument cluster with a choice of display and information options, whilst the 10.25” AVN system is now standard across the range, with its combination of Bluelink app control, KRELL premium multi speaker sound and navigation with voice control. For those that select the 8 inch Display Audio system they can wirelessly connect their smartphones.

The Bluelink upgrade brings it more into line with what a lot of the latest EVs are offering – to select charging times that best fit your schedule or your budget, as well as pre-heat your car when connected to an external power source to save battery power on the road. It also includes a range of new and advanced connectivity features. Last Mile Navigation, for example, helps customers continue the journey to their final destination via the Bluelink app even after their car has been parked, using either Augmented Reality or Google Maps. Connected Routing harnesses real-life and historical speed information through GPS, which is stored in the server and updated every month, to predict upcoming traffic every five minutes. This ensures more accurate traffic forecasting, more precise times of arrival, and more reliable route recalculations. Live Parking Information is also really useful – it gives users real-time information on the location and price of nearby available parking spaces. All very clever stuff.

There’s also ambient lighting for the front footwells, a choice of two interior colour packages and additional storage space in the front of the car where the shift-by-wire system, which now enables operation of the driving modes, eliminates the routing space for the mechanical linkages between a normal shifter and the transmission. The handbrake has also been brought into the 21st century and is now electronically activated. Passengers in the rear benefit from a USB port. 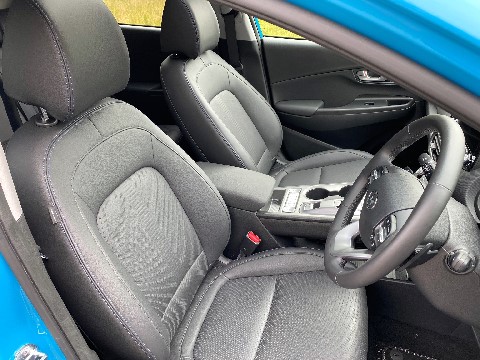 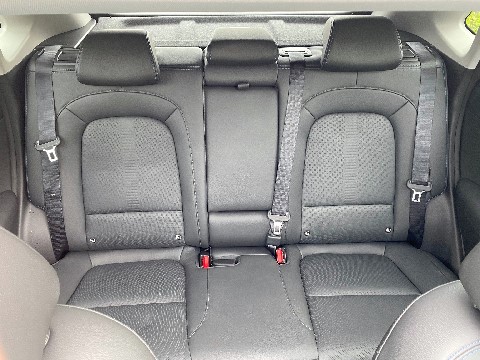 Like its predecessor, the new KONA Electric still offers two different battery electric powertrains. Here’s a reminder to those who need it. The long-range version with a 64 kWh battery delivers 198bhp, 291lb-ft and a 0-62mph time of 7.9 seconds, while the basic version with a battery capacity of 39.2 kWh, provides the same torque but is down on power by 66bhp, and takes two seconds longer to complete the aforementioned sprint. Top speed is 104mph and 96mph respectively.

After tyre improvements on the 2020 model year update, the 64kWh battery version offers a claimed class-leading range of 301 miles (WLTP) on a single charge (although we managed 270 over our week with it), while the smaller battery model offers a range of up to 190 – still more than enough for the average motorist.

The Smart Adjustable Regenerative Braking system allows the new KONA Electric to automatically set the regenerative braking level, but drivers can take over via paddle shifts and they work great for slowing it down without the need to touch the brake pedal. When you do need to use the brake it’s a lot more natural and predictable compared to other rivals, such as the Nissan LEAF.

Charging from 10 to 80 per cent takes about 47 minutes using a 100kW direct current fast charger and there’s an optional 10.5kW on-board charger, allowing for significantly shorter charging times using public three-phase AC charging stations or a wall box at home (6 hours 50 minutes for model tested 10-100%). Moreover new KONA Electric owners can now benefit from the brand’s Charge myHyundai – a pan-European integrated public charging service, which gives access to over 170,000 charging points via a single card or an app, and can be easily found via the central touchscreen. 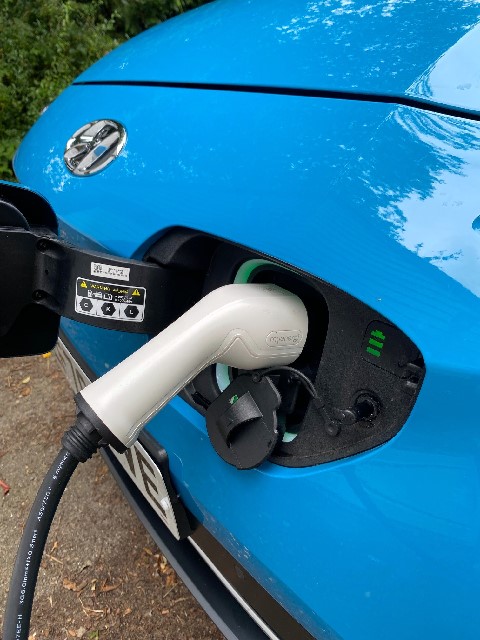 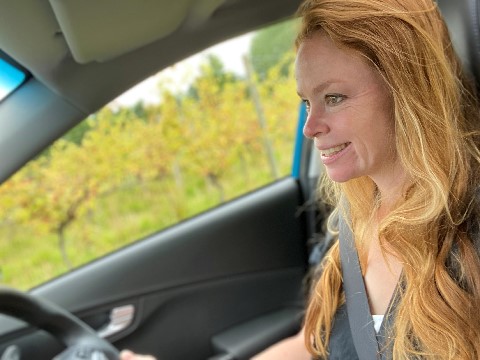 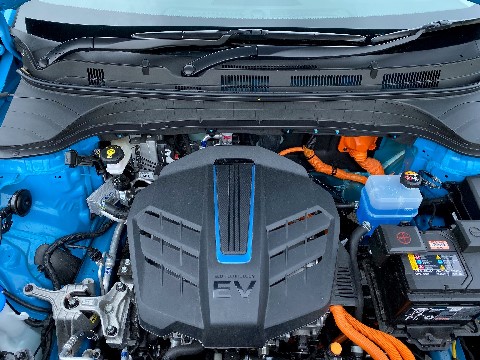 The KONA Electric isn’t exactly lacking in safety and driving assistance systems, but the update brings even more functions for added peace of mind under the guise of a SmartSense package. These include Blind-Spot Collision-Avoidance Assist (BCA) and Rear Cross-Traffic Collision-Avoidance Assist (RCCA), which offer not just warnings to drivers, but also implement the brakes where necessary, with the latter  helping to avoid a collision when reversing and the former preventing an accident if another vehicle is detected near the rear corner and the driver attempts to change lanes. There’s also Leading Vehicle Departure Alert (LVDA), which alerts the driver if they do not react fast enough when the vehicle ahead of them starts moving, Safe Exit Warning (SEW), warning passengers intending to exit the vehicle if it is not yet safe to do so, and Rear Seat Alert (RSA), a handy driver’s little helper type of feature, which essentially reminds them if something (or someone, if they’re particularly forgetful!) is in the back seat when they open the doors having arrived at their destination. In addition, the new KONA Electric is also available with eCall, a feature which automatically alerts emergency services if the airbags are deployed or the eCall button is pushed.

Three trim levels are available to customers with the new SE Connect and Ultimate trims joining a revised Premium specification. Prices start from £27,950 on the road, which will get you the 39.2kWh battery with the usual Hyundai high level of standard specification. 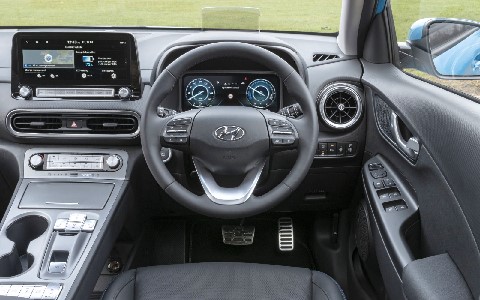 The Hyundai KONA Electric has been a key player in the UK’s EV market and these latest updates should help to meet consumers growing demands of what they want from an electric car in terms of cost, range and equipment levels. When it first went on sale the choice for EVs with more than 200 miles of range were limited – there was the Tesla Model S or X, Jaguar I-PACE or Audi e-tron – and you needed at least £70,000! So at the time a small crossover with a claimed 300 mile range for not much than £30,000 was revolutionary. And they plan to continue down this path. In fact, with the automaker adding 20 models to its range, totalling 23 all-electric cars by 2025, it’s quite possible they could be dominating the sector. After all it seems if the price and range is right, when it comes to EVs, there’s a lot less badge snobbery. 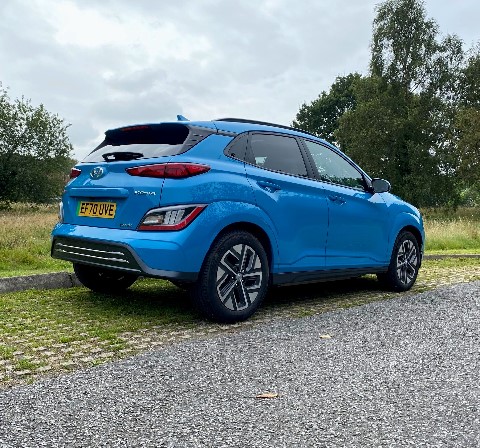