With 278 miles of a range and a starting price of 35,900, the Hyundai Electric Kona almost matches the distance you can travel in your regular car and at a fairly reasonable price point, too.  It’s also bang on trend being an SUV but is it better than its competitors?

The Kona Electric is part of the electrified model line-up from Hyundai, alongside the Kona Hybrid, IONIQ family, NEXO and Tucson 48 Volt Hybrid models. It has an impressive range of up to 278 miles and as the first automotive brand in Europe to make a fully electric subcompact SUV it plays on Hyundai’s strengths and expertise, having won several prestigious accolades from media and industry organisations for its other eco cars, including the IONIQ electric.

If you’re looking at buying an electric SUV you have the choice of the Kia e-Niro, Kia Soul EV or MG ZS EV. If it’s range you’re after and you don’t care about the size of the car then there is also the Nissan LEAF, Peugeot e-208 and Renault ZOE.

Our test car for the week was a Hyundai Electric Kona 64kWh Premium SE, and those performance figures make it quicker than the aforementioned MG, Nissan, Renault and Kia. A feather-light use of the throttle is required in wet weather as the front wheels really struggle for traction. Saying that it’s fairly easy to break traction or induce torque steer even in the dry.

Just like in the Audi e-tron, and a lot of other electric cars, the intensity of the regenerative braking can be adjusted with the paddle shifts behind the steering wheel. You can also switch from minimum to maximum regen instantly by holding down the left-hand paddle which will automatically bring the car to a stop in a gradual manner (so you can be sure you’re not losing energy to the friction brakes).

In combination with the radar sensor, the regenerative braking system will automatically control the regenerative braking in accordance to the traffic ahead, which is pretty neat.  Should you want to take total control of the car’s brakes, it allows you to remove the electric motor regen from the brake pedal entirely by turning off the car’s stability and traction control systems. To be honest though we don’t know why you’d do that - it's one of the smartest regen systems around and very easy to recoup a number of miles on a single trip.

While it doesn’t have as much body roll in the corners as the LEAF or ZS EV, it’s not as sharp to drive as its other rivals. The Kona Electric definitely falls short when it comes to spirited driving with grip levels, ride comfort and steering certainly not on a par with the e-Niro for example. Hyundai claim that customers of the KONA Electric will benefit from fun-to-drive dynamics, sorry but we would have to disagree.

As previously mentioned the Kona Electric offers two batteries – either 39kWh (available in SE or Premium trim only) or 64kWh (Premium or Premium SE), which provide an electric range of 180 or 278 miles and an energy consumption of 15 kWh per 100km (under WLTP testing) in the former version or 15.4 in the latter. The remarkable bit is that in the real world the Hyundai is capable of hitting this figure, setting it apart from virtually every other electric car, and putting it ahead of its competitors and the more expensive (although quicker) Tesla Model 3 Standard Range Plus (with 254 miles). Hyundai have actually seen 300 miles on official test cycles, as have a lot of owners.

Being an electric car of course, you’ll spend a lot less on electricity than you would on petrol or diesel and you won’t pay road tax. Company car drivers benefit from zero benefit-in-kind (BIK) tax (at the time of writing), while it’s also exempt from London’s Congestion Charge zone. If you look around, there are still cheap or free parking perks (and charging!) for electric cars.

Its distinctive looks certainly aren’t for everyone. One of the key differences between the Kona Electric and its polluting counterparts is the closed grille incorporating the charge point and a redesigned front bumper with active air flaps, both of which enhance aerodynamics. Another characteristic element is the high-level LED daytime running lights. Out back the bumper has also been redesigned for improved airflow, as have the indicator and fog light units, while the rear spoiler features an integrated LED brake light. The profile of the Kona Electric is differentiated with unique 17 inch alloy wheels, lower side skirt, wheel arch claddings and a roof rack. There’s a choice of six metallic and pearl exterior colours, but if you don’t like what’s on offer you can pay out for another hue.

Compared to the petrol and diesel Konas, it uses lighter-hued plastic and the centre console is completely different – positioned much higher and housing buttons for reverse, park, neutral and drive rather than a traditional transmission selector. Overall the interior is quite plain and the quality of materials and general design isn’t what you’d expect in a car that costs more than £30,000, but it is functional. Drivers benefit from a large 7 inch instrument cluster, which displays key information such as battery charge level, energy flow and driving mode, while a head-up display (fitted to Premium SE models) projects speed and navigation commands, as well as safety-related warnings from assistance systems, and information about the audio mode and radio.

A 7 inch infotainment system with DAB radio and smart device integration (offering Apple CarPlay, Android Auto and Bluetooth connectivity) together with a USB port and an AUX jack all come as standard while Premium and Premium SE trim cars get an easy to use 10.25 inch touch screen with satellite navigation (featuring TMC, Map Care and LIVE services) and wireless phone charging. It also features the Bluelink telematics system; a smartphone app based connected car service that enables drivers to carry out a number of different functions whilst away from their car as well as notify them of any maintenance issues.

There’s a choice of black cloth (SE and Premium) or leather effect (Premium SE) and even the cheapest of the three trims provide 18-way electric adjustment as well as electric lumbar support for the driver. Seat ventilation and heating are optional as is a heated steering wheel.

If you regularly take six-footers in the back of your car, the ZS EV offers the most space; likewise the Kona Electric doesn’t have the roomiest of boots. With 332 litres (29 litres down on that of the standard Kona) it’s the smallest in its segment, with the LEAF trumping them all. There are plenty of storage spaces however for personal items, such as underneath the centre console, together with cup holders, front seat back pockets and a sunglasses holder.

With prices starting from £30,150 for the SE model (equipped with 39kW battery) it undercuts the Kia e-Niro ‘2’ with the same range by over two grand. The MG ZS EV however is £24,495 although it only has a 163 mile range (which we found to be enormously over exaggerated in real-world driving conditions) and the Renault ZOE is £26,495 with a similar range (245 miles) and driving dynamics.

The 64kWh version is well equipped (even in Premium trim) and boasts genuine, useable range which makes it a credible ownership proposition for those looking to switch to an electric SUV that is relatively affordable. It’s just such a shame it disappoints when it comes to interior quality, space and handling. If you can afford to spend the extra £950 for the e-Niro ‘3’ with 282 miles we’d go for the Kia. Sorry Hyundai. 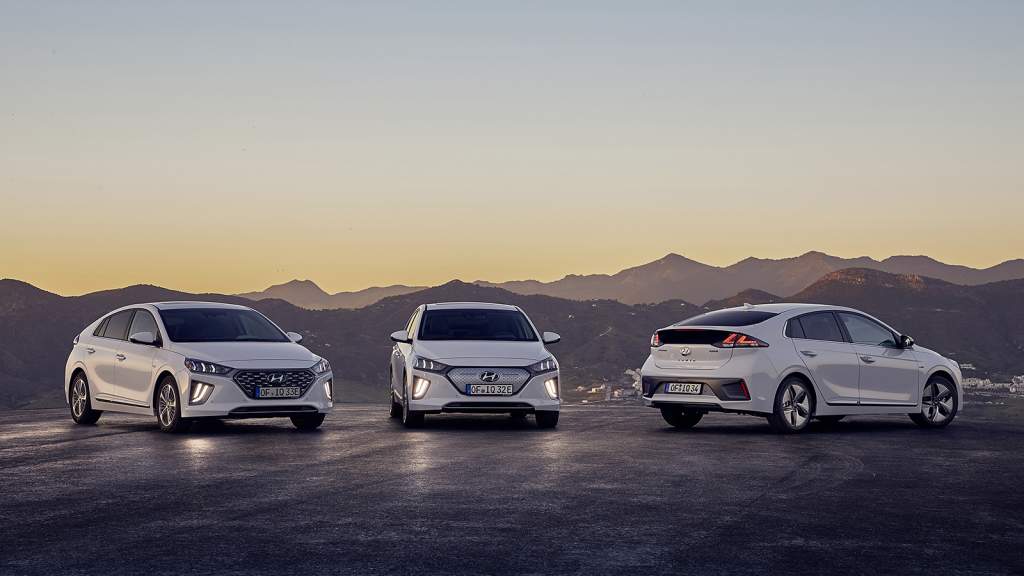 Hyundai announces prices and specifications for New Kona and Ioniq 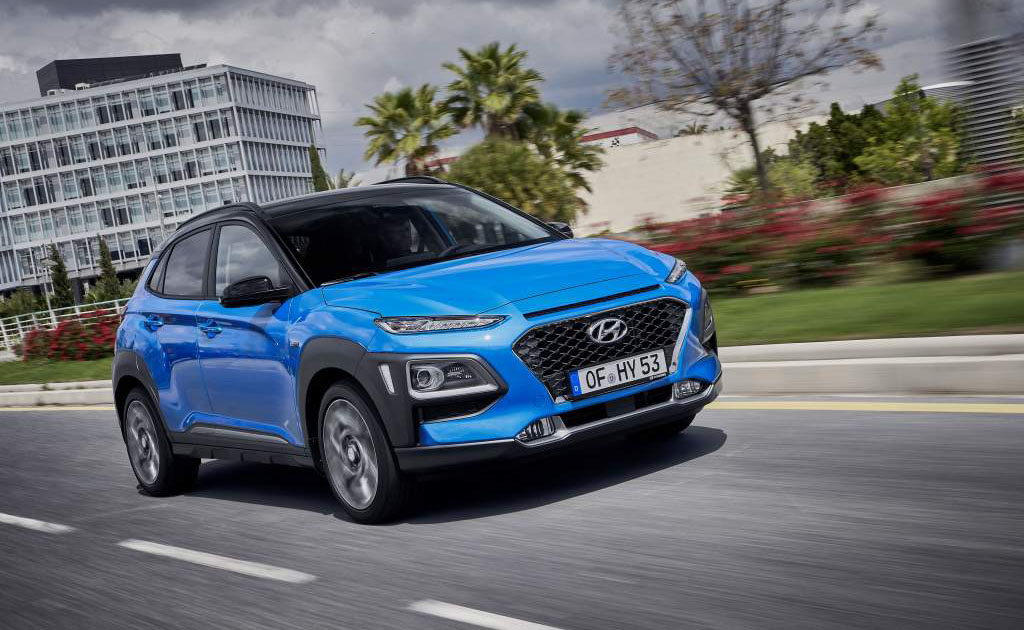